Travel survival by the numbers

WITH the travel sector on its knees and buckling under the weight of indefinite travel restrictions, last month's Federal Budget flagging mid-2022 as the likely date for international borders to reopen came as another hammer blow to the sector's already brittle confidence.

Travel Daily’s inaugural Survival Survey garnered responses from across the travel industry and presents a bleak picture of how businesses are coping with the ongoing border closures. Adam Bishop breaks down the numbers.

WITH the travel sector on its knees and buckling under the weight of indefinite travel restrictions, last month’s Federal Budget flagging mid-2022 as the likely date for international borders to reopen came as another hammer blow to the sector’s already brittle confidence.

Certainly, companies like Qantas were hopeful of an earlier resumption date for overseas travel, at least for vaccinated Aussies, with CEO Alan Joyce confidently telling a CAPA Live session in April that the carrier would be back flying most of its international routes by Oct this year.

However, a slower than anticipated vaccine rollout has stymied Australia’s ability to emerge from the fog of COVID with any great haste, with the scars of 2020 rapidly morphing into a two- to three-year proposition.

And amidst the gloominess, the Federal Government has been pilloried by many within the travel industry for failing to put together a coherent roadmap out of the fortress state that Australia now finds itself, while many countries around the world in the meantime begin to take their first exploratory steps into the light toward some semblance of travel normality. Lamentably Australian travellers can only dream about when this might materialise.

Only a few weeks ago, the Council of Australian Tour Operators begged the government to stop leaving the travel industry in limbo and put forward a clear framework for the sector to plan around. Likewise, the Australian Tourism Export Council (ATEC) expressed its “dismay” at the lack of government clarity regarding the steps required to reboot international travel.

In a strongly worded letter addressed to the Prime Minister, ATEC said there was a “desperate need” for a government plan by which travel companies can actively strategise around to ensure their short- and long-term business survival.

For its part, the government has been keen to portray the issue as a binary debate weighting health against economics, with Prime Minister Scott Morrison repeating the phrase ad nauseam that the borders will only reopen “when it is safe to do so”, providing very little in the way of details or certainty for the travel industry. 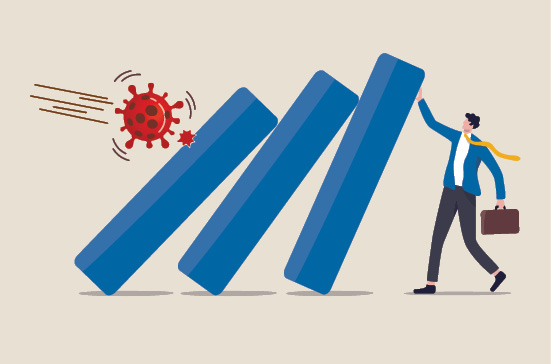 Meanwhile the Australian Chamber of Commerce and Industry has played its part to advance the conversation, submitting a roadmap to the government to unlock international travel that is tightly tethered to the country’s vaccine rollout. The plan incorporates a combination of risk zones based on the number of active COVID cases, vaccination status and self-isolation/quarantine scenarios.

But whatever the plans being proposed, for the moment at least the government is either unable or unwilling to put something tangible on the table, leaving the many thousands who work in travel to ponder what their collective futures will look like well after the pandemic subsides, or indeed if they even have a future at all.

In order to gauge how the industry is coping, travelBulletin‘s sister publication Travel Daily recently launched a Survival Survey in a bid to gather an accurate snapshot of how people in the sector are reflecting on their plight and how they feel it will change in the future.

The findings were far from shocking given the unprecedented ructions caused by the health crisis, but nonetheless the data still painted a grim picture of where sentiment is at the moment among those working in the hard-hit sectors of travel and tourism. 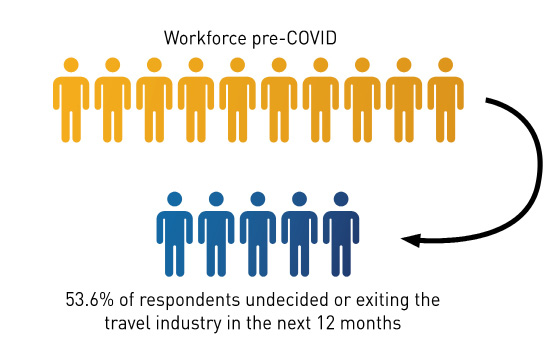 Perhaps highlighting this sombre mood more than any other data point was the 53.6% of respondents who revealed they were either undecided about staying on in travel or would be exiting the industry altogether in the next 12 months.

Sadly, the bulk of those surveyed have worked in the travel and tourism space for more than 30 years (35.4%), suggesting that the COVID crisis may bring on a major sea change for thousands of people late in their careers. More than half of the respondents were aged over 50, with 16.4% aged between 31 and 40, and only a small fraction (3.4%) aged under 30. The employment crisis facing the sector would also appear to be a gendered one, with close to 70% of those taking part in the survey being women. 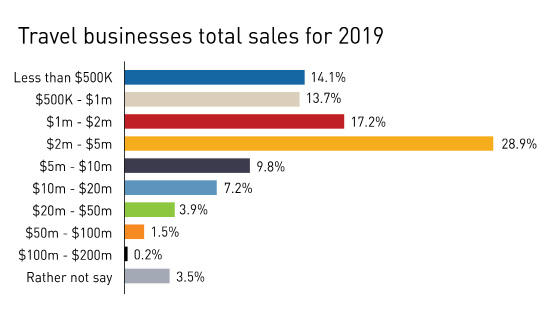 Some of the likely factors driving this change around career changes include a major drop off in salaries and business revenue.

This reality is illuminated by the dramatic shift in the employment status of workers in the industry, with full-time jobs dropping from 80% before the travel shutdown to half that proportion currently. In turn this has seen a steady climb in the number of part-time or casual staff working more than 20 hours a week, increasing from 11.9% before March 2020, to 22% at the moment. 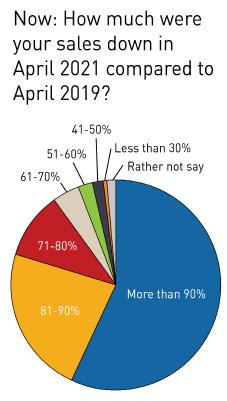 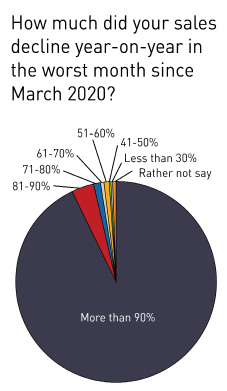 Travel businesses also indicated just how severe the impact of the travel shutdown has been on their bottom lines, with 93% of companies conceding their worst month since the pandemic struck saw a plunge of more than 90% in year-on-year sales.

Unfortunately, the figures do not suggest most of that financial damage is in the rear vision mirror either, with sales for April 2021 still a shadow of the same period in 2019. Close to 60% of businesses stated their sales were down more than 90% when compared to April 2019, while 22.6% said the number had dwindled by between 81-90%.

The results also reveal that the size of travel companies have shrunk considerably since the health crisis began, with the average number of staff employed dropping by nearly two thirds, from 6.2 to only 2.78 employees. 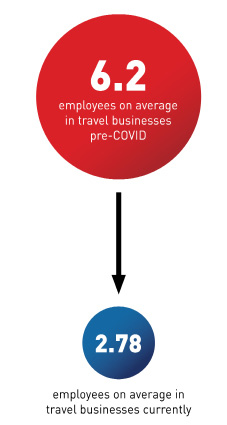 While revenue has clearly taken a sizeable hit, the travel industry has at least by and large managed to access the Federal Government’s JobKeeper program, a vital lifeline that has helped the vast bulk of businesses in the space stay afloat. The survey showed the government support program was widely subscribed, with more than nine in 10 travel companies indicating they were able to access the key government assistance while it was available to the end of March 2021.

However, the picture for the subsequent COVID-19 Travel Support Program appears far less clear, with the number of companies getting knocked back for funding increasing between round one and round two by about 18 points, from 27.4% to 45%. The reasons for being rejected for the second round of funding included not qualifying or applying for the first round (27.8%), or because an applicant received funding in the first tranche based on Total Transaction Revenue (TTV), the latter being the result of government confusions about how the industry operates which saw funds distributed disproportionately in the first round. The data showed that 11% of respondent businesses received the full $100,000 in the first round of Travel Support Program, while around a quarter received between $10,000 and $100,000 in grants, and 15% were allocated less than $5,000.

The allocation in the second round however appears to have been far less fruitful, with only 3.3% of respondents stating they had received the maximum amount of between $80,000 and $100,000, and around a quarter of applicants being granted between $20,000 and $80,000. 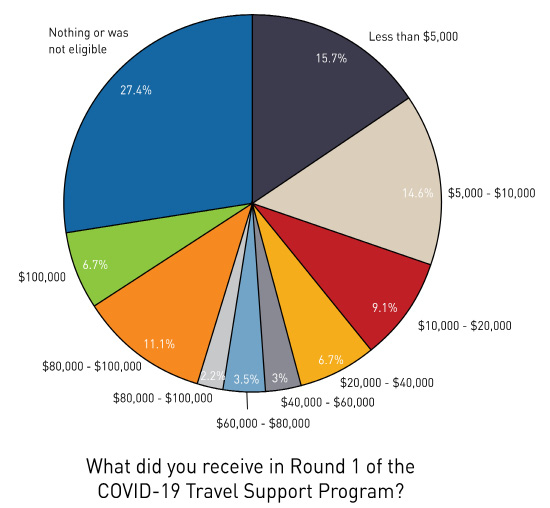 When it came to what businesses in travel and tourism were spending this emergency funding on, many used the cash for a number of different purposes. Paying technology suppliers of GDS, internet, and computers etc. topped the list for 73% of respondents, followed by paying staff (62%), catching up on rent (50.9%), keeping food on the table (49.7%) and paying client refunds (37.4%).

Meanwhile the Federal Government’s small business loan offered under the SME Recovery Loan Scheme has seen very few travel businesses apply, with close to 90% opting not to take advantage of the initiative. A minuscule proportion of just 3% of respondents had loans approved, while 7% had their applications rejected. 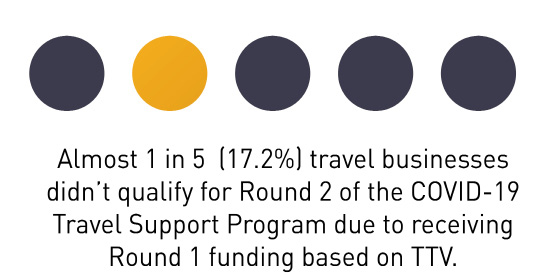 Two in five travel business also conceded they had not been able to access any alternative forms of financial relief, with only a quarter of companies able to successfully negotiate rental relief from their landlord and 35% said they received state or federal government cashflow bonuses. 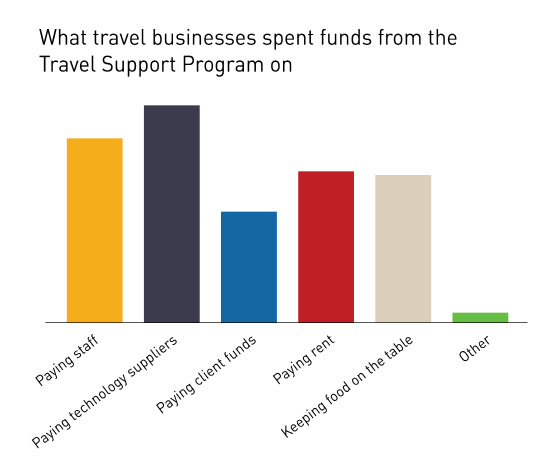 While funding has played an important role in keeping the sector alive, many businesses have continued to fall away, some by financial necessity while others have simply made the decision to shut up shop proactively.

For those intent on survival, some have made the decision to weather the storm by stepping out of their comfort zone and starting a unique side hustle, with plucky owners pivoting their sales models in a variety of weird and wonderful ways in a bid to open up new revenue streams. 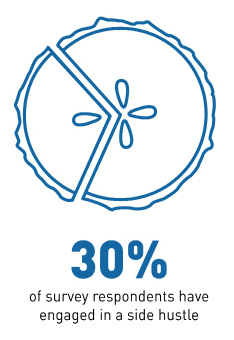 Agents have so far turned their hands to everything from pie-making, baking home-made muesli to crocheting blankets, proving again the ingenuity and resilience that exists in the travel sector, with survey data supporting this view by showing that 30% of survey respondents have so far engaged in a side hustle. 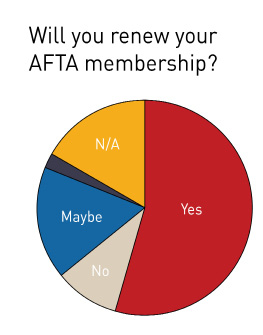 But it’s not only travel companies that have been dented by the pandemic, with the survey not painting an optimistic picture for the Australian Federation of Travel Agents (AFTA) either. While 78.7% of businesses indicated they were an AFTA member before March 2020, only 54.6% said they would definitely continue their membership under the current renewal round. 17% of respondents said they were on the fence about subscribing for another year, while close to 10% suggested they would not be renewing.

The figures from the Travel Daily Survival Survey reflect the current feeling in the industry which, after 15 months of the pandemic, is understandably pretty bleak. And just as Rome wasn’t built in a day, the travel and tourism sector is unlikely to be rebuilt swiftly either.