Step back in Thailand Time

See a new side of the Land of Smiles by visiting its ancient capital, writes Kristie Kellahan.

It’s difficult to imagine a place that could be more different from Bangkok than Sukhothai. Today, the Thai capital leads the way with soaring skyscrapers, cosmopolitan rooftop bars and huge shopping malls where bargains are always in fashion. But in Sukhothai, the ancient capital of Thailand, life moves at a much slower pace, as historic traditions are revered.

The seat of Thai power in the 13th and 14th Centuries, Sukhothai is more than 400 kilometres north of Bangkok. The name means ‘dawn of happiness’, and Thai people look to Sukhothai as the birthplace of their happy Kingdom. Now recognised as a UNESCO World Heritage-listed city, the drawcard is the abundance of fascinating ruins – almost 200 at last count. Combined with a visit to nearby Si Satchanalai Historical Park and Kamphaeng Phet Historical Park, the history lessons are fascinating.

Sukhothai offers insights into Thailand’s proud heritage and traditions. To wander the sprawling Historical Park in the Chao Phraya Valley, with its royal palace ruins and exquisite, all-seeing Buddhas, is to walk in the place where the Thai alphabet was created. The core tenets of Thai language, architecture and political system were honed here, during a golden age in which the nationhood of Thailand really began. 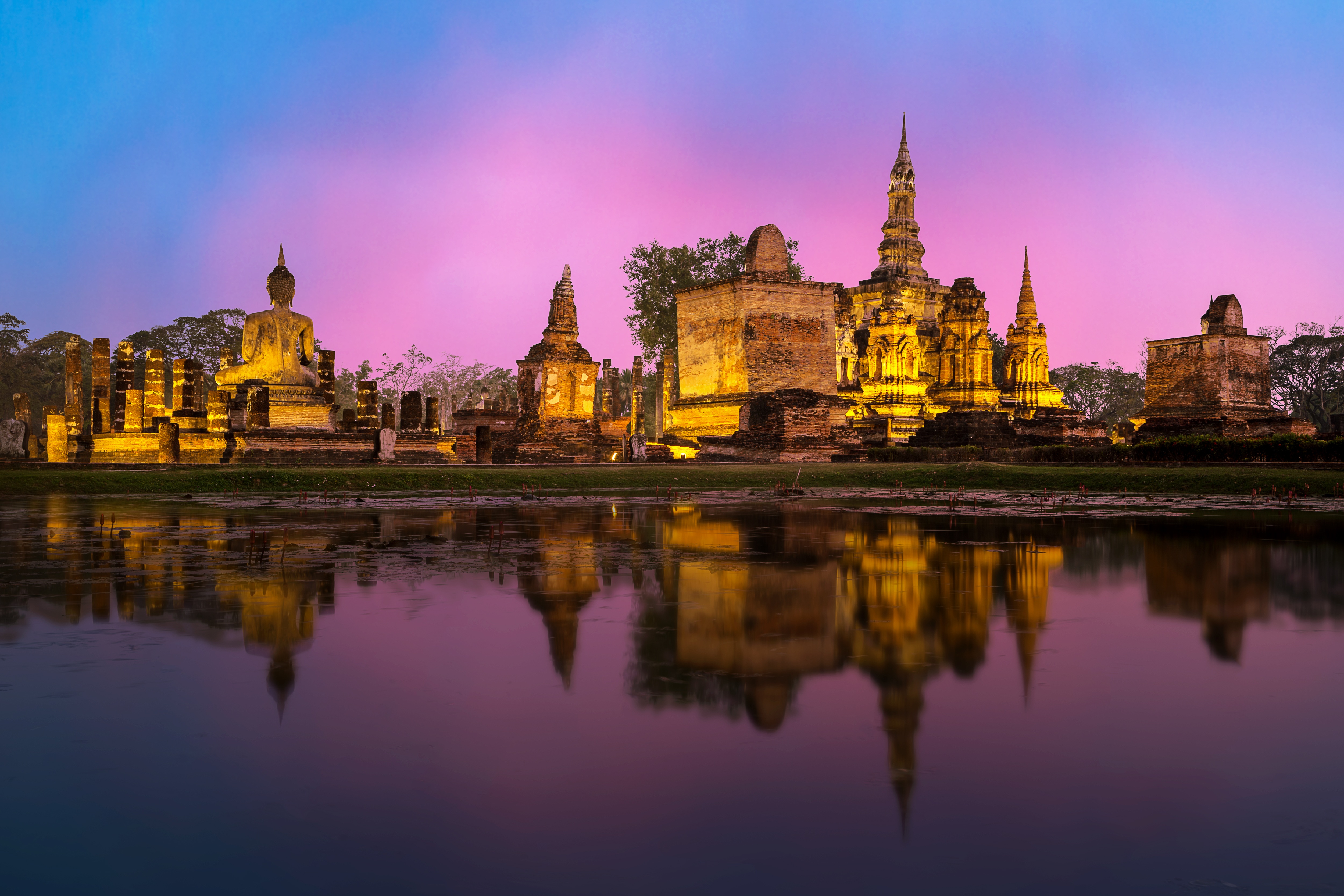 Dozens of temples and Buddha statues are just some of the treasures to be explored at the Sukhothai Historical Park, an attraction at least as impressive as its more well-known Khmer cousin, Angkor Wat. Keen photographers are advised to visit in the hour before sunset to capture the glorious light as it falls on looming Standing Buddhas, lotus ponds and earth-coloured temples topped with bell-shaped chedis.

A popular pilgrimage destination for Thais, this heritage-rich region reveals a far more authentic face of Thailand than the gaudy one shown in places like Pattaya. Thanks to the efforts of archaeologists who took on the mammoth job of restoring the 700-year-old ruins, the Historical Park has been winning rave reviews since it officially opened almost 20 years ago.

A year-round destination, tourist numbers to the region tend to swell in the slightly cooler months of December through February. To miss the worst heat of summer, try to avoid visiting Sukhothai in March and April. And for arguably the most spectacular event on the calendar, plan a visit to coincide with Loy Krathong. A three-day candlelit festival in which the rivers and waterways of Thailand brim with colourful flower offerings and the sky lights up with the release of hundreds of lanterns, it is said that Loy Krathong originated in Sukhothai more than 700 years ago. Every year in November, during three days of festivities, flaming lanterns and spectacular fireworks illuminate the night sky, while parades and food festivals provide a party atmosphere. Held annually on the full moon in the 12th lunar month, this year Loy Krathong will be celebrated 3-5 November.

To get to Sukhothai, travellers can hop on a 75-minute Bangkok Airways flight from the capital, or board a bus in Bangkok or Chiang Mai. Getting around is easy, with bicycles for rent and private tuk tuk tours costing less than $10.

Not far from the Historical Park, a range of accommodation and dining options are available from upscale to backpacker-budget. Le Charme Sukhothai Resort is tranquil and lovely; a low-rise village of traditional Thai pavilions surrounded by lotus ponds, tropical gardens and a landscaped swimming pool area where cheerful elephant statues spout water. Just one kilometre from the Historical Park, the resort is well-located.

For adventurous travellers, a local homestay could be a memorable accommodation option. Room and board is provided, along with the opportunity to join in village daily life: rising early to give food offerings to saffron-robed Buddhist monks, participating in fruit harvesting and preparing dinner with a host family.

There are dozens of good dining options in Sukhothai, from casual Thai to French fusion, woodfired pizza and even a German pub. Ruean Thai Restaurant & Bar is rated highly by locals and visitors.

The region’s chefs promote organic and sustainable produce, an initiative supported by government leaders keen to encourage eco-friendly agro-tourism. The Organic Agriculture Project at Sukhothai Airport, known as The Farm, is an award-winning experiment in healthy farming practices. Visitors have the opportunity to learn firsthand about the lives of organic rice farmers, while participating in outdoor classroom activities. Fresh organic food and drinks are available for purchase; stock up on edible souvenirs here.

Don’t miss the opportunity to try authentic Sukhothai noodles, a staple at most restaurants in the area. Rice noodles are mixed with green beans, crispy pork, coriander, chilli and peanuts in a soy sauce broth made from a recipe that is said to have been passed down by home chefs for many hundreds of years.