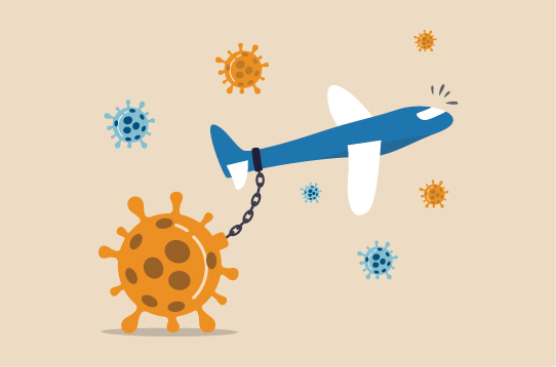 The long, winding road to recovery

TWO years on from the start of the coronavirus pandemic, the Australian travel industry looks very different. Travel Daily's second Survival Survey garnered responses from across the travel industry and presents a picture of a resilient group of people at the start of a protracted journey back to normality. Adam Bishop breaks down the numbers.

TWO years on from the start of the coronavirus pandemic, the Australian travel industry looks very different. Travel Daily’s second Survival Survey garnered responses from across the travel industry and presents a picture of a resilient group of people at the start of a protracted journey back to normality. ADAM BISHOP breaks down the numbers.

WHILE most people agree the travel sector in Australia will be forever changed because of the pressure applied to it by the health crisis, the extent to which it will transform and when it will turn a corner remains open to debate. While most of the big publicly listed travel companies last week posted significant losses, the majority also pointed to some encouraging green shoots that have been seen over the last few months.

If Flight Centre is any guide, the company noted in its latest financial presentation that it continues to target a return to 2019 TTV volumes by the full year 2024. By that time the travel giant said its cost base should be materially lower than 2019 because of structural changes it enacted to increase both scalability and profitability. Flight Centre also noted the changes would enable the company to rapidly grow its “labour-light” leisure models in the online and b2b spaces. But testament to the murkiness and uncertainty of the current climate, Flight Centre also declined to provide a formal FY22 guidance, citing a lack of visibility over the time frame and extent of any perceived recovery, exacerbated by not knowing when remaining restrictions around the world would cease, if any future COVID strains will emerge, and whether or not increasing geo-political instability instigated by the invasion of Ukraine by Russia would create further headaches for travellers.

But it wasn’t all doom and gloom, with most big players in travel also playing up the potential goldmine that over two years’ worth of pent-up demand and a recent swathe of countries abolishing travel restrictions could provide, as a host of key markets concede the reality of “living with the virus” moving forward. While Flight Centre noted it was predicting the near-term recovery to exceed the rebound experienced after the Delta wave in November last year, so too was Qantas optimistic that domestic air sales would bounce back firmly, assuming all borders remain open for business.

The carrier indicated last month that it was expecting to reach 68% of its pre-COVID local capacity by the third quarter of 2022 and achieve between 90-100% of 2019 volumes by the end of the final quarter this year.

While its international network will clearly face more challenges, Qantas was buoyed by a “reduced friction” abroad brought on by diminishing restrictions, indicating leisure bookings were leading the momentum, particularly its non-stop and premium offerings for the Northern Hemisphere summer. On the flip side of the coin however, the complications caused by Omicron and slower-than-anticipated openings from major outbound markets such as Japan, New Zealand, Indonesia and China have also dented the recovery pipeline. As a result, Qantas now thinks it will be able to claw back to 70% of pre-COVID capacity by the first quarter of next year, a slightly less optimistic timeline than it had counted on a year ago but still tracking in an encouraging direction. 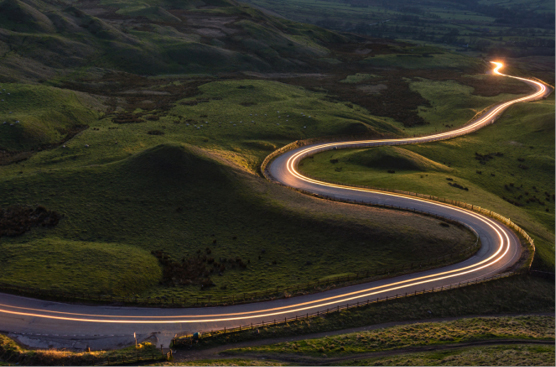 While it’s easy to get a flavour of what the future picture will look like for publicly listed companies at the top end of town, it can certainly be more opaque to obtain the same insight at the grass-roots level. That’s why travelBulletin’s sister masthead Travel Daily recently brought back its Survival Survey to ascertain what the zeitgeist was like among its valuable industry readers.

One noticeable trend taking place over the last 12 months has been the exodus from retail/office-facing jobs in exchange for home-based roles. While not entirely unexpected, the survey results certainly show the pilgrimage is being undertaken at pace. Close to 80% of respondents indicated they were working in either an office or retail front position before March 2020, however that number has dwindled to less than 30% of travel workers. Meanwhile home-based work has grown from 13% before March 2020 to nearly 60% currently. This realignment almost seemed inevitable from the outset of the pandemic, with major players Flight Centre and Helloworld both shedding large volumes of bricks and mortar operations early on as part of their respective survival plans, while investment and focus on developing more agile home-based networks has come from multiple quarters. The need to diminish overhead such as rent and utilities, fewer availabilities for full-time jobs and improving technology have all contributed to the shift. There is also a case to be made that the ructions caused by the shutdown have suited the core survivalist skillsets of existing home-based agents over retail facing advisors, with TravelManagers Chairman Barry Mayo previously telling travelBulletin that remote travel agents boast a competitive skills-based edge over traditional agents during the prolonged period of limited physical interaction. 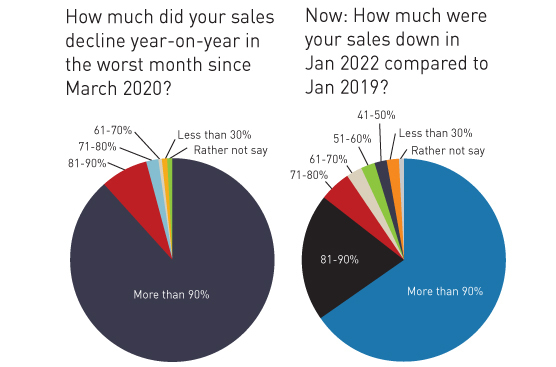 “Home-based agents are already used to working remotely and are experienced in using alternative methods of communication to complement face-to-face interaction with their clients,” Mayo suggested.

From an earnings perspective, the ship for Aussies working in travel appears far from being righted, with 65% of people suggesting sales for January 2022 were down more than 90% compared to January 2019, while one in five also stated sales had decreased between 81-90% on pre-pandemic levels. Close to 60% also told us they were now earning less generally than they did in 2019, and only 14% indicated they were roughly on the same wicket now than they were before the health crisis.

The survey results also showed that full-time travel jobs have dropped significantly from 77% before the pandemic to 59%, however, recent job numbers from Seek and other sources suggests this trend may be starting to finally turn around.

Those workers and businesses still left standing in travel were in large part able to do so because of government support funding, with more than 90% of respondents confirming they were able to access the crucial JobKeeper payments to keep them afloat during the early stages of the shutdown. Around 7.5% said they were ineligible for JobKeeper, while more than half were able to access contributions from the Federal Government’s COVID-19 Travel Support Program. Just over one in four respondents said they had received some level of funding, but “less than what they thought they deserved”, while 17% lamented they were not eligible to access any funds from the scheme. 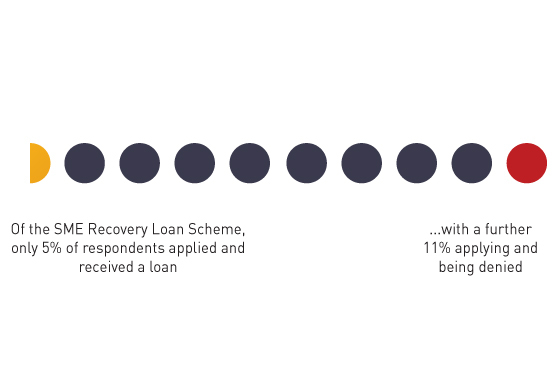 The tougher eligibility criteria, in addition to problems rolling out the first tranche of the scheme, led to fewer businesses being able to access round two of the COVID-19 Travel Support Program, with only 41.5% telling the survey they were able to successfully grab a fair portion of funding the second time around. Close to 20% said they had received some funding but “felt they were deserving of more”, while a similar percentage were told they were not eligible to access the second part of the program, a subset of which were told this was because their first round funding was allocated on the basis of TTV and not revenue.

The government’s SME Recovery Loan Scheme remained undersubscribed according to the survey, with only 5% applying and getting approved for a loan. Another 11% told us they applied for a loan under the scheme but were knocked back, with the vast majority of respondents (84%) stating they chose not to apply for a loan at all. Alternative forms of financial assistance came mainly in the form of rental relief from landlords, state or federal government cashflow bonuses and other various forms of government grants. 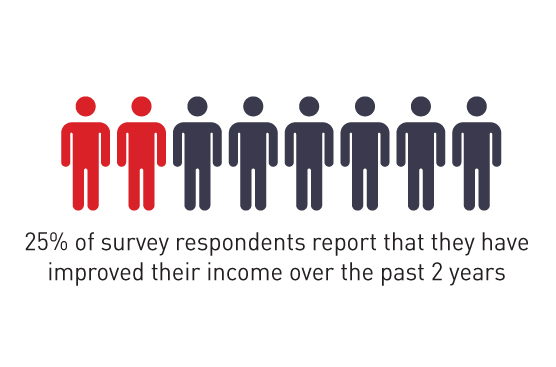 The pandemic has also left a deep impression on some of travel’s major industry bodies. The Australian Federation of Travel Agents (AFTA) saw its membership challenged during the crisis, with 78% of respondents stating they were members of AFTA before March 2020, while only 69% have stuck by the organisation with renewed membership.

And while the figures above don’t exactly paint an optimistic picture of the sector, it is important to note that two thirds of those surveyed said they expected to continue having a career in travel in 12 months’ time, a large increase on the 44% noted in our inaugural survey last year.

In 2021 there was clearly far more doubt about the viability of verticals like travel agencies, with 44% only willing to answer “maybe” to the big question of future career prospects, however in this year’s survey the undecided had shrunk by 16%. Amazingly, 25% of respondents also told us they had managed to improve their income over the last two years, so amid the fire and the brimstone that has been the pandemic era, there also appears to be some hope to clasp firmly as we soldier together on the long and windy road to full recovery.