THE virulence of the coronavirus pandemic has kept borders around the world slammed firmly shut, and while we’re all glad 2020 is over, it now appears possible that the coming year will show little significant improvement – unless the much hoped-for COVID-19 vaccines manage to stop the virus in its microscopic tracks. But in a world of conspiracy theorists, where some parts of the population won’t even have their children immunised against horrific diseases like polio, will enough people be vaccinated against COVID-19 to allow travel and tourism to return to any semblance of normalcy? Bruce Piper investigates the possible post-coronavirus future.

With a torrid 2020 in the rear view mirror, there appeared to be a glimmer of hope for a brighter new year for the Australian travel sector in the weeks leading up to Christmas. While long-haul international travel remained firmly off the agenda as COVID-19 infection rates soared in Europe, the UK and the USA, locally we all felt a little bit of pride and optimism as state borders finally started to come down.

Domestic flight bookings boomed in the lead-up to the traditional Christmas holiday period, and there was just a little bit more certainty among those making reservations that they would actually be able to make their long-deferred trips. There was talk of a trans-Tasman bubble emerging early in 2021, as well as discussions about opening up reciprocal travel arrangements with other countries seeing similar low infection rates like Japan, Taiwan and South Korea – and even the dream of a holiday somewhere in the Pacific.

On top of all that, Health Minister Greg Hunt, ever cautious about raising expectations, confirmed that Australia was on track to roll out its planned COVID-19 vaccination program ahead of schedule. Some reports cited immunisations starting as early as February, with hopes that up to four million Australians could be inoculated by April. His announcement came with some actual facts – a full schedule of priorities listing those who would be among the first to get the jab. Finally, we thought, we are getting on top of this scourge.

Meanwhile, as desperate authorities in the Northern Hemisphere rapidly approved new vaccines to handle the pandemic, we all collectively felt a sense of hope and self-satisfaction, that while Australia was well positioned in terms of its own immunisation program, and the rigorous trials that had been already conducted leading to the approvals, the jabs would also in fact be well-tested on those people in other far-off countries before we were able to use it.

But are vaccines the answer?

However as the new year rolled around – amid new lockdowns related initially to the Avalon outbreak in Sydney and then rolling out to new infections in Queensland and the arrival of more virulent strains of COVID-19, that brief moment of a brighter dawn dissipated like the morning dew. Once again the ham-fisted, haphazard imposition of restrictions slammed down on the travel and tourism sector and put paid to any expectations that consumers might start booking with any certainty. 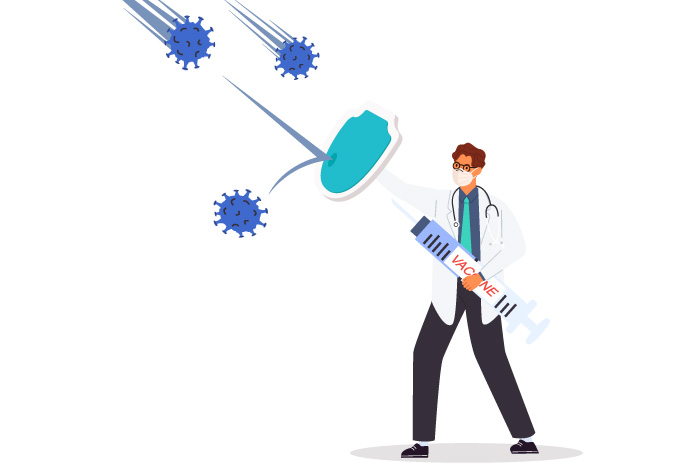 But still, the promise of the vaccine kept hope nurtured in many industry hearts – and whatever happens any successful immunisation against COVID-19 will be an improvement. However as the harsh reality of the new year sinks in, it’s appearing less and less likely to be the travel panacea we were all hoping for. Indeed, based on recent ill-considered comments by former Chief Medical Officer Brendan Murphy, borders may not open to any significant extent until 2022 – although in the next breath he reiterated the ongoing uncertainty of the pandemic which meant the Government effectively only had a month or two’s insight into the future.

We all wait with bated breath for more clarity, but in the meantime it is also helpful to take stock of the landscape so we can get a realistic view of what international travel may look like in the future. With a huge variety of inoculation regimes in different countries around the globe, there are some significant hurdles to be leapt in order to be assured that the mass movement of people across borders continues to be safe.

Should vaccines be compulsory?

We do live in the lucky country, and despite their imperfections it appears that so far the approach taken by our political leaders have helped Australia to a large extent avoid the carnage wrought by COVID-19 across the northern hemisphere. When Prime Minister Scott Morrison and other leaders unveiled Australia’s vaccination plans, he noted that the jabs would be voluntary, but then later added that the rollout would be “as mandatory as you could possibly make it”. Health Minister Greg Hunt has also made pains to stress that the vaccination program would be available universally, at no charge, to the entire population. But he also noted that the immunisations would be “voluntary and free,” gently adding: “we encourage people to have the vaccine to protect themselves and their family”.

No such niceties about opting into the vaccine were observed by Qantas CEO Alan Joyce, who in late November announced the seemingly eminently sensible policy that international air travellers were likely to have to prove that they had been vaccinated against COVID-19 in order to board QF flights. He confirmed that the carrier was looking closely at updating its terms and conditions of carriage. “We will ask people to have a vaccination before they can get on the aircraft…for international visitors coming out and people leaving the country we think that’s a necessity,” he said.

Interestingly, while the Qantas chief was the first to make such an outspoken statement, he certainly implied that his counterparts across the globe were likely to take a similar approach. But others have been slow to follow – perhaps due to an immediate uproar about the proposed Qantas approach.

That included a statement from UK-based tour operator Tradewinds Travel which said that following Joyce’s statements “we decided as a company that we would no longer offer Qantas flights to our customers”. The travel company noted that while it was just a relatively small business compared to QF, “we feel that bodily autonomy with regard to medical intervention is a personal choice and not something to be forced onto people by business. We are not anti-vaccination but we are pro-choice. There is a huge difference between coercion and making a free choice,” Tradewinds said.

Cruise lines similarly have been slow to assert whether they plan to make pre-voyage vaccinations compulsory, with the exception of Norwegian Cruise Line Holdings CEO Frank Del Rio, who has confirmed that the company is looking into whether it has the “legal standing to mandate that you take a vaccine to come aboard”.

There is no doubt that much of the travel and tourism sector would side with the Qantas and NCLH approach, but apparently not the World Travel and Tourism Council, whose CEO Gloria Guevara also came out strongly against mandating vaccination for travel. At an online conference last month she likened forcing people to have vaccinations to “workplace discrimination”. Clearly unaware of the situation in Australia where minimal community transmission has seen almost every case of COVID-19 ultimately linked to an international arrival, she claimed that onboard protocols and air filtration on planes meant there was “less chance of catching COVID in a plane than a supermarket”. Indeed, a recent study conducted by the New Zealand Department of Health showed incontrovertible proof via genomic sequencing that a number of passengers aboard a socially-distanced, almost empty inbound long-haul aircraft had contracted the virus from another traveller during their 14-hour flight to Auckland from the Middle East.

The arguments against mandatory vaccination also make little sense when you consider that for some countries immunisations against other conditions are also a requirement for travel – such as Yellow Fever vaccination certificates which are compulsory for entry to a number of countries in Africa and South America.

This is a significant precedent for mandating COVID-19 vaccination – because after all, travel is not compulsory or a right, and those who are opposed to the jab can simply choose not to go overseas. There are also many occupations where having particular vaccinations are a condition of employment, and in terms of overall community health surely it should be about the issue of the greater good – similar to other major public health issues like having running water and sewerage systems to avoid disease in our communities.

A new type of passport?

There are literally hundreds of COVID-19 vaccines under development at breakneck pace, with about nine already approved and being deployed across the globe.

The projects are being conducted thanks to billions of dollars of research funding provided by governments, such as former US President Trump’s Project Warp Speed which poured money into developing a solution to the pandemic. While each country undergoes its own certification and approval processes to protect its local population, the issue of international travel is compounded by a requirement that each nation recognise the efficacy of vaccines provided in other jurisdictions. 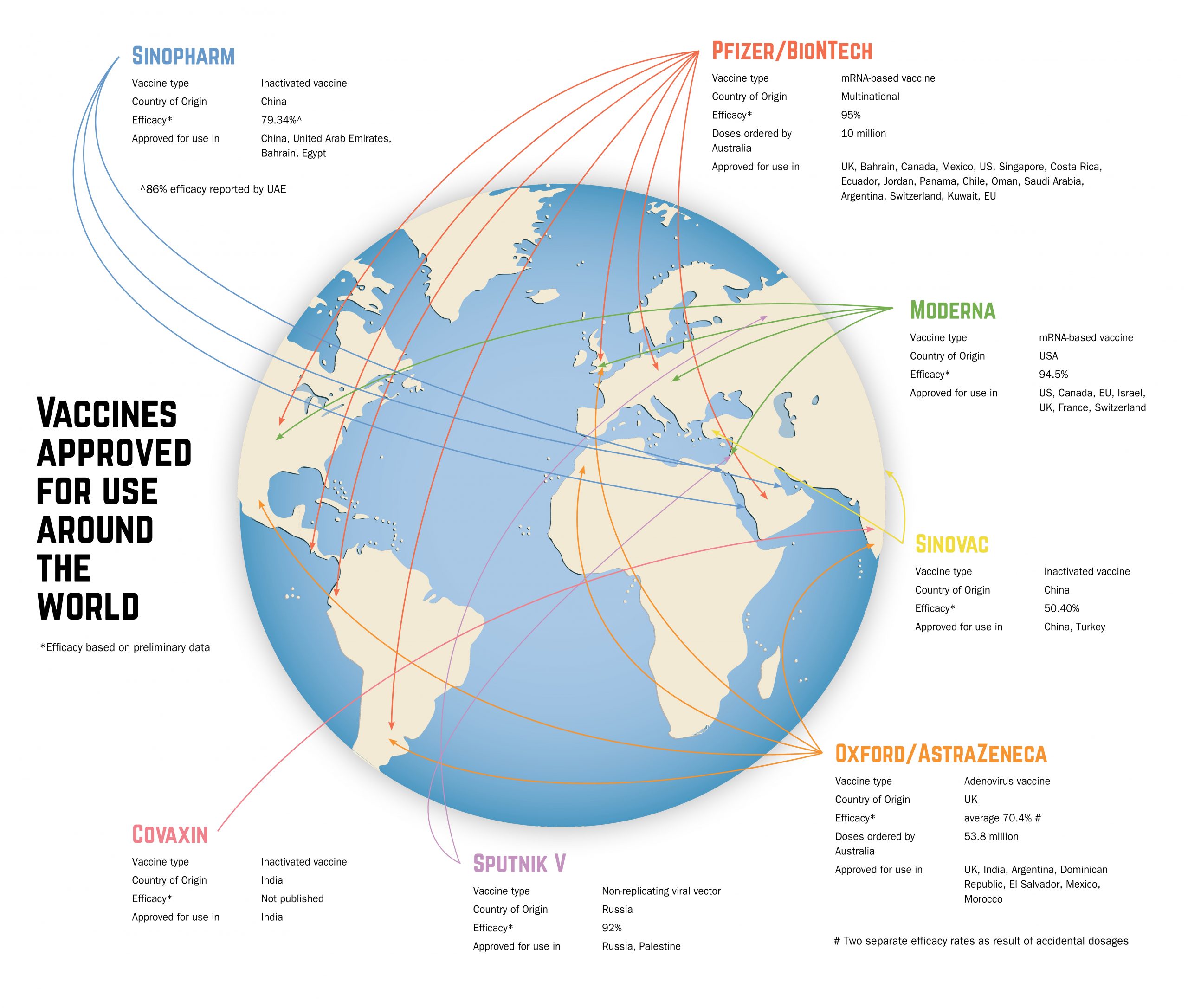 To that end the International Air Transport Association is among several organisations working on digitally-enabled ways to facilitate travel in a post-coronavirus world. IATA’s Travel Pass initiative aims to give border authorities confidence that they are effectively mitigating the risk of importing COVID-19.

The digital platform recognises the current major challenges to accurate health information, including the complexity and variety of COVID-19 testing and immunisation procedures, and the possibility of inefficiencies, errors and fraud.

“The main priority is to get people travelling again safely. In the immediate term that means establishing confidence in governments that systematic pre-departure COVID-19 testing can work as a replacement for quarantine requirements,” IATA said, perhaps somewhat optimistically given the prevalence of COVID-19.

Unfortunately at the moment the only thing that is certain about the future is that it is uncertain.

Notwithstanding that, the world’s best brains are focused on solving the COVID-19 problem.

Progress is being made every month, and having proven that the industry is resilient enough to recover from other massive shocks, like the 9/11 attacks in 2001, aircraft crashes and other pandemics, those with a “glass half full” attitude are likely to see their optimism rewarded. Let’s hope so.