Scenic can see the light

LONG-SUFFERING travel agents with passengers booked on Scenic Eclipse have been assured that a further revised delivery date for the highly anticipated Discovery Yacht is “most definitely achievable”. Last month fears of a third delivery delay were confirmed, with Scenic Chairman Glen Moroney saying the first scheduled cruise had been amended to 15 August 2019 — almost exactly 12 months later than initially planned.

Scenic has been the victim of financial issues at the Uljanik shipyard in Croatia, where months of construction time have been lost because staff were not being paid. Despite herculean efforts by Moroney and his team — including directly employing more than 110 on-site specialists who in turn were supervising over 500 contractors — the Eclipse project has suffered ongoing issues, but recent developments are likely to put the newbuild on a much firmer footing. 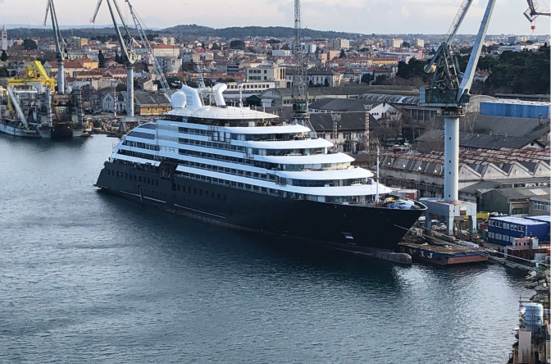 A restructuring proposal for the shipyard, involving Italian shipbuilding giant Fincantieri and Croatian firm DIV, has seen Uljanik under new ownership, with Scenic confident that this will bring “stability and focus to current and future ship builds”. Scenic’s ongoing commitment to the project is also likely to produce long-term goodwill for the company, with Uljanik’s Chairman, Emil Bulic, issuing a tribute to Moroney and his team for the “trust and support shown during past collaboration constructing the ultra-luxury polar cruiser Scenic Eclipse”. Bulic added: “We would like to emphasise that the support of the Scenic Group is of great importance for the survival of the shipyard and the continuation of the business processes at Uljanik”.

Moroney confirmed that Scenic had signed a letter of intent with the consortium to form a joint venture to design and project-manage the expansion of the Discovery Yacht fleet. “Production of Scenic Eclipse II will commence as soon as the restructuring program is approved, and we have already commenced detailed design of an entirely new series of Scenic Discovery Yachts,” he said.

Scenic apologised for the inconvenience the repeated delays had caused to guests and agents. “As a company we have done everything possible to complete the ship within the time limits that were set previously, but a series of events that are outside our control have put us in a position where we must delay,” a spokesperson said. “Please be assured we are working hard to complete the delivery of Scenic Eclipse — a whole new benchmark in design, innovation and luxury — to bring you this amazing cruising experience”.