Not just sun and sand

FOR Australian event organisers, Hawaii presents an attractive destination for offshore events, with a range of top-class venues, an English-speaking environment and a relatively short hop from the East Coast.

Hawaii’s capital, Honolulu was also one of the top 20 US destinations for international events according to the ICCA report.

Speaking to travelBulletin, Hilton Hawaii Vice President and Commercial Director, Duke Ah Moo, said the Australian tourism and events market was hugely significant to the state’s hotel and conference industry. “The average length of stay to Hawaii from Australia is about nine and a half nights, which is over the norm,” he said.

“The norm is about five-and-a-half for us, so we’re really focused on developing more business from [the Australian] market.”

As part of that push, the Hilton Hawaii properties have been working with Hawaii Tourism Oceania to showcase the facilities and support services available to planners.

While Ah Moo said event organisers can get an idea of what the various hotels can offer using virtual tours and 360 images of meeting rooms, he told travelBulletin seeing the venues was also an option for meeting planners.

“We’re very open to bringing over meeting planners so they can see the destination first-hand, visit our hotels and understand them better,” he said. 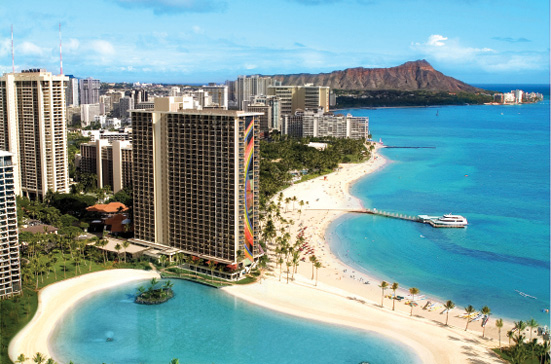 “All our hotels have meeting spaces, many of them have both indoor and outdoor function space. For example, at the Hilton Hawaiian Village, we have a lawn that can have up to 1,000 people outside.”

As an island state with a strong Polynesian heritage, Ah Moo said Hawaii offers organisers a different flavour to mainland US destinations.

“Something that’s a distinguishing factor of Hawaii is the culture,” he said.

“We’ve got sun and the beach, like many other destinations around the world, but to have a unique culture that is still alive and thriving… is something we’re very conscious of.

“We have teams of people at each of our hotels that are dedicated to preserving that culture and to educating our guests about the culture.

“In addition…the Hawaiian Tourism Authority has created a Manager of Culture position to make sure that in all the events that we’re doing…that there are cultural elements incorporated in that,” Ah Moo said.