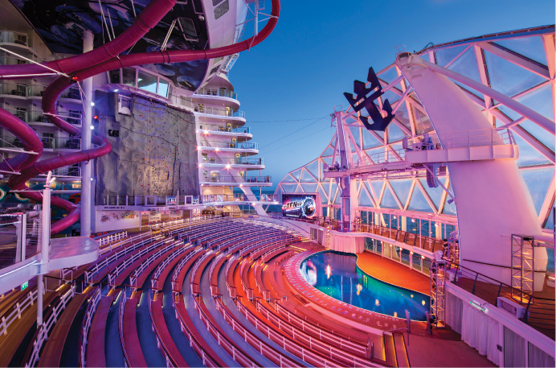 The plethora of activities, entertainment options, restaurants and bars on Royal Caribbean's new Wonder of the Seas shows just what the cruise industry is able to achieve when it sets its mind on something.

THE plethora of activities, entertainment options, restaurants and bars on Royal Caribbean’s new Wonder of the Seas shows just what the cruise industry is able to achieve when it sets its mind on something. travelBulletin was invited on the first European departure of this gigantic ship, the fifth and largest in the Oasis class series, which debuted in the Caribbean more than a decade ago. Like its sister ships, Wonder features the innovative Central Park precinct – a capacious area in the middle of the ship open to the sky, complete with thousands of plants alongside eateries, cafes and bars – which allowed Royal Caribbean to introduce the concept of “internal balcony cabins” which overlook this pretty green space. 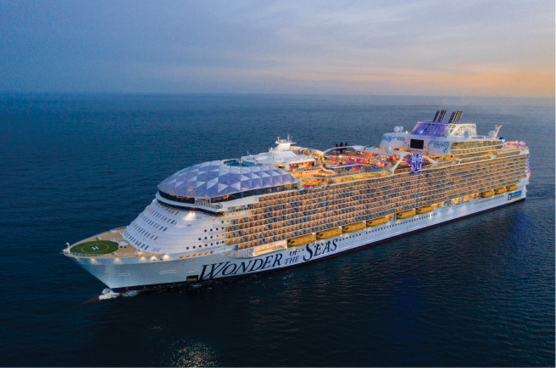 Wonder also features the Aquatheatre, an ice rink, the enormous Grand Promenade and a host of activities for kids and adults alike, but has also been enhanced with the addition of a new “Suite Neigbourhood” where Royal Suite guests are welcomed to a private sun deck with a plunge pool and bar, an exclusive restaurant and lounge and the new Ultimate Family Suite (pictured below), an outrageously lavish two-storey accommodation which can sleep a family of 10 complete with an in-suite slide, a cinema, karaoke lounge and even a ping pong table.

With 2,867 staterooms Wonder of the Seas has capacity for 5,734 guests at double occupancy, but this can expand to almost 7,000 passengers once additional berths in family cabins are filled. It truly is a small city on the water, with 2,300 international crew serving passengers across 18 decks. The ship also boasts a host of new technology features, such as 24 high-speed guest elevators, a smartphone app that makes your device into a room key, and behind-the-scenes, lots of environmental enhancements to help lift the ship’s sustainability credentials in areas such as waste management, emissions reduction and fuel efficiency. 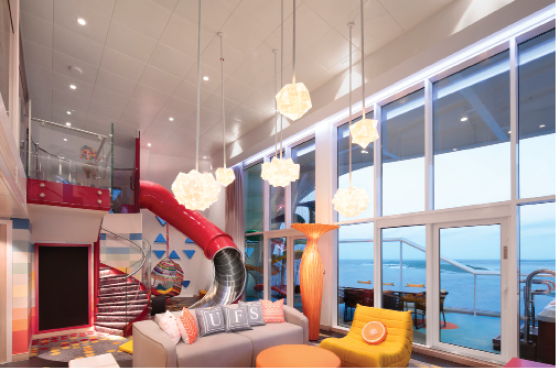 Along with old Royal Caribbean restaurant and bar favourites such as Chops Grille, 150 Central Park, Johnny Rockets and Starbucks, Wonder of the Seas has added The Mason Jar, a southern-style eatery where you can enjoy waffles and chicken for brunch – with a side of bacon and all smothered in maple syrup of course! The robots at the Bionic Bar are a popular feature, and certainly got a workout during our voyage.

There’s really something for everyone on board, with the ship seeming to have some activity or other going on almost 24 hours a day. Whether it’s the spectacular skating in Studio B, Olympic-class synchronised swimming and high diving at the Aquatheatre (pictured below) or the opportunity to ride a zipline six storeys high, guests will certainly not be bored.

Currently the only port in Australasia which is capable of handling ships of this size is the new Brisbane International Cruise Terminal, so it may be some time before we see Oasis-class vessels in local waters. But in the meantime there’s plenty of opportunity in both Europe and the USA to experience these ships, with Wonder of the Seas a truly apt name for what Royal Caribbean has achieved.