GROWTH in the Australian cruising sector ground to a screeching halt in 2018, with passenger numbers overall up less than 1% to 1.345 million, according to the Cruise Lines International Association 2018 Australian Ocean Source Market Report which was released last month. While still a record in terms of overall numbers, the figure indicated the impact of cruise infrastructure constraints, particularly in Sydney, which have clearly had a key influence on deployment decisions by the major cruise lines.

The long haul fly-cruise market out of Australia showed growth of 3.4% to 315,000 passengers, but that wasn’t nearly enough to offset flat capacity growth for domestic cruising, which only expanded by 0.1% for the year, making the net growth figure just 0.9% — following a decade of strong year-on-year industry expansion.

And the bad news isn’t over for domestic cruising, with CLIA Chairman and head of Carnival Australasia, Sture Myrmell, predicting that the 2019 figures will potentially indicate negative growth, before recovering in 2020 once the new Brisbane Cruise Terminal comes online. Speaking at the release of the report, Myrmell noted other cruise related projects announced in Cairns, Eden and Broome which he said would help “reignite growth in the homeport market”.

CLIA also highlighted the world-leading market penetration rate of cruising, with 5.8% of the population taking an ocean cruise in 2018 — or the equivalent of almost one in every 17 Australians. By comparison, the cruise penetration rate is 4.0% in the USA, 3.0% in the UK and 2.8% in Germany. But Australia’s growth rate was significantly lower than the global average of 6.7%, with 2018 seeing 28.5 million cruisers worldwide. Australasia was the fourth largest source market in the world last year, with 5.1% of passengers coming from the region which “punches well above its weight” given its relatively small population.

The most popular long-haul cruise destination for Australians in 2018 was the Mediterranean, where 74,000 Aussies experienced a voyage. That was just ahead of the next most popular region of Asia, with 72,000 Australian passengers. About 37,000 Aussies cruised in Alaska — a figure expected to expand in 2019 as cruise lines bolster their capacity in the region, while 35,000 Aussies cruised in the Baltics and Northern Europe. Rounding out the global footprint, 28,000 Australians experienced a Caribbean voyage last year, just ahead of the 25,000 who cruised in Hawaii/North America. A total of 22,000 Australians undertook a world cruise, transatlantic voyage or an expedition cruise. 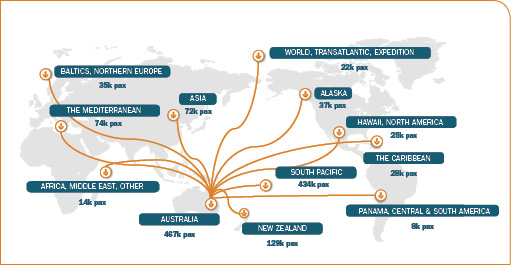 Where Aussies are cruising

CLIA also highlighted the expanding cruise market across Australia. NSW remained the largest source of cruise passengers, accounting for just over half of all cruisers, but its share declined slightly as other states and territories contributed more to the total. Queensland grew to 22% of ocean cruise passengers, followed by Victoria with 13%, 5% for Western Australia, 4% for South Australia, while Tasmania, the ACT and Northern Territory comprised about 3% of passenger numbers. The average age of Australian cruisers was 49 last year, but there was a strong correlation between age and length of cruise, with passengers on longer cruises to Northern Europe, Alaska and expedition destinations more likely to be in their 60s.

The report analysed average cruise length, which reduced slightly from 9.1 days last year to 8.8 days in 2017. That most likely reflected an increasing number of short break itineraries in local waters. Cruises of 8-13 days remained the most popular, accounting for almost 40% of the market.

Despite the relative softness of 2018, CLIA Australasia Managing Director, Joel Katz was upbeat about the future.

“Cruising continues to be exceptionally popular among Australian travellers after many years of growth and world-leading market penetration. A lack of berthing capacity in Sydney has hampered cruise lines’ efforts to expand their operations in local waters, but the increasing number of Australians flying to ports overseas shows the market is still strong and holds great potential for the future,” he said.

Katz noted that cruise lines had already announced significant new vessel deployments in this region from the 2020-21 season, with smaller, older ships to be replaced with newer, larger options. He highlighted the “urgent infrastructure priority” of Sydney capacity for the cruise sector in Australasia, adding that the industry looked forward to further announcements on the NSW Government’s Cruise Development Plan.