HURTIGRUTEN has committed to improving its internal procedures after the release of an investigation by Norwegian authorities into the outbreak of coronavirus on Roald Amundsen last month.

With Hurtigruten committing to transparency, it published on its website the full report from the Norwegian Maritime Directorate (NMD), which found a risk assessment was not carried out before the start of the cruise. 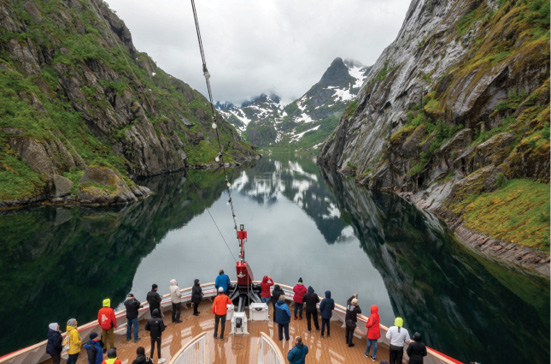 Social distancing on display on a Hurtigruten cruise © Andrea Klaussner

The review also said Hurtigruten’s reporting culture “does not seem to have worked as it should in connection with the incident”, with staff apparently aware of coronavirus symptoms two days before the ship arrived in Tromso with cases aboard.

The NMD also criticised the “emergency preparedness” of Hurtigruten after the outbreak was confirmed, alleging plans for dealing with the incident did not work as expected.

“What the NMD points out is serious and shows that we must improve,” said Daniel Skjeldam, Chief Executive Officer of the cruise line, which has since worked to update its procedures and contingency plans”.

MEANWHILE, the Australian Hurtigruten team has flagged plans to relocate away from Victoria to New South Wales, with regional MD Damian Perry saying the ongoing lockdown means “there are now too many challenges and uncertainty in trying to expand in Victoria”.