HURTIGRUTEN has conducted the world’s northernmost naming ceremony for a passenger ship, with the battery-hybrid-powered Fridtjof Nansen officially joining the fleet at latitude 78 north in Svalbard.

The local community joined in the celebrations of one the greenest and most advanced cruise ships ever built, with the traditional bottle of champagne replaced with a chunk of ice for her christening, in a continuation of a Hurtigruten ritual invented by Norwegian explorer Roald Amundsen.

In the naming of Fridtjof Nansen, godmothers and environmental advocates Hilde Falun Strom and Sunniva Sorby quoted Amundsen’s words from when he named Maud, a ship specifically built for his second expedition to the Arctic.

“It is not my intention to dishonour the glorious grape, but already now you shall get the taste of your real environment,” the pair said.

The traditional godmother gift was also replaced by a joint donation to Sorby and Strom’s Hearts in the Ice project and the Hurtigruten Foundation.

In honouring the cruise line’s century-plus-long Svalbard heritage, Fridtjof Nansen is also the first cruise ship ever to be registered in Longyearbyen. 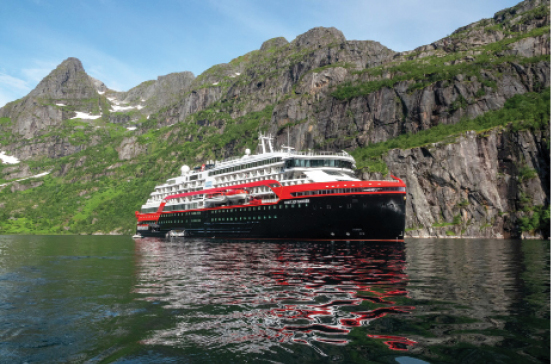