Touted as taking ocean cruising “to a whole new level”, the Polar Class 6 vessel features two helicopters and a six-guest submarine, along with indoor and outdoor plunge pools, butler service for all guests and an almost 1:1 guest to staff ratio.

Scenic Chairman and founder Glen Moroney said the launch was “the fruition of many years of planning and work from a large and dedicated team to create a vessel and an experience which has set a brand-new benchmark in ultra-luxury discovery cruising”.

“In terms of innovation, technology and design it is second to none,” he said. 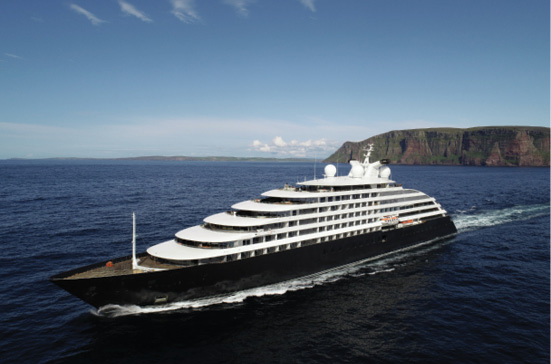 Scenic Eclipse caused waves for the company early on, with the vessel suffering delays as a result of major upheaval at the shipyard commissioned to build the ship, Uljanik Shipyard in Croatia.

The vessel, was originally slated to launch in 2018, but ongoing strikes and a financial crisis at the shipyard caused it to be repeatedly delayed and Scenic stepped in to directly employ hundreds of staff to keep the project moving.

Initially scheduled to launch on 31 August 2018, Eclipse was first delayed until January 2019, and then the ship’s debut was further revised to 13 April 2019, followed by its actual launch on 15 August 2019.

Scenic Eclipse marks Scenic’s first foray into ocean cruising, with the vessel offering capacity for 228 guests and just 200 in the Arctic and Antarctic.

The ship will venture to destinations including Antarctica, South Georgia and the Falkland Islands, along with Northern Europe, the Mediterranean and the Americas.

Scenic has a second ocean ship on order from the same shipyard, Scenic Eclipse II, which when it was confirmed in February 2018, was slated to launch in 2020.