PLANS to build a 90m fixed gangway and two 15 metre by 15 metre concrete mooring structures fixed to the seabed of Auckland Harbour to cater for larger cruise ships have come under attack after about 200 protesters, plus 20 to 30 boat took to Queens Wharf to oppose the construction.

Under the current arrangement, ships larger than 294m-long are unable to enter the wharf.

The NZ$10 million project, which would extend the existing berthing options for cruise liners, would allow ships of up to 362m-long to berth at the wharf. Yet, the plans have left locals unimpressed with the “incremental attack” on the harbour, with the advocacy group rallying to “protect our most precious asset for future generations”. 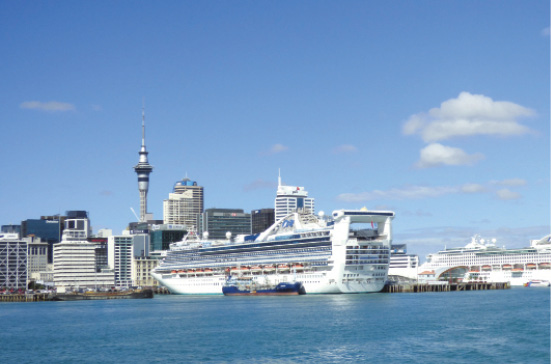 The New Zealand Cruise Association has spoken out about the issue, stating that Auckland’s “lack of infrastructure” to support larger ships is causing the city to “miss out on cruise business”.

“Large cruise ships bring significant economic benefits to Auckland and New Zealand – if Auckland misses out, so do the regions,” the Cruise Association said.

“The proposed mooring structures are an interim measure that will satisfy the infrastructure requirements of the cruise industry until a new, larger berth is built, which is expected to take at least another 10 to 15 years.”

Ports of Auckland has had to decline 22 ships this season due to inadequate infrastructure, and cruise industry members are being encouraged to be vocal in their support of the mooring application.