APT and its US partner AmaWaterways set a new standard in European river cruising with last month’s official christening of the highly anticipated AmaMagna. travelBulletin was on the spot for the ceremony, which was officiated by Samantha Brown, host of the popular American travel show Places to Love. AmaWaterways is a long-time sponsor of the show, so it was only fitting that Brown was able to swing the celebratory Champagne bottle. It took a couple of attempts, but eventually the Veuve Clicquot magnum splashed across the hull before an evening of merriment and entertainment in the quaint Austrian riverside township of Grein. 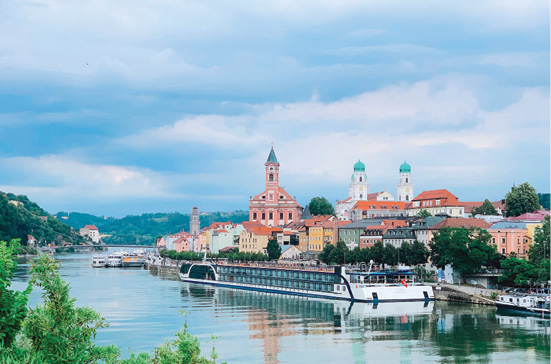 You couldn’t wipe the smiles off the faces of AmaWaterways co-founders Rudi Schreiner and Kristin Karst as they showcased their new baby to the world. AmaMagna is 22m wide — double the width of other traditional European river ships — and that has created a platform for significant innovation. The ship has four distinct restaurants, a large gymnasium and spa, guest laundry and an onboard boutique — not to mention expansive public areas where guests can curl up with a good book or just enjoy the serenity of the passing landscapes. But where AmaMagna really wows is in the staterooms, which are significantly bigger than anything else on the river. The scale of the ship has allowed for the inclusion of almost 50 balcony suites, with a spacious sitting area, a step-out balcony and a large double-sink bathroom. If that’s not big enough, there are also six grand suites which are even larger, along with the Owner’s Suite which features its own bar, dining area and a host of bonus inclusions. There’s also a water-level “sports deck” at the rear of the ship, with a speedboat that can be used for additional excursions and activities. 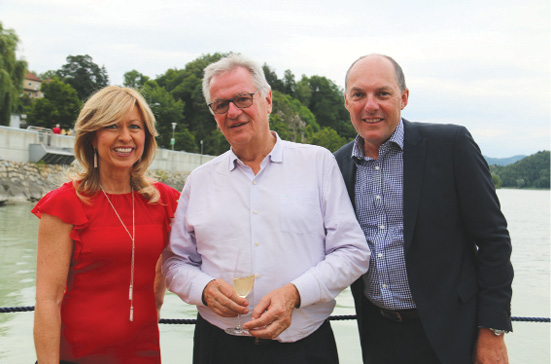 “I’ve had this unique ship on my mind for years,” Schreiner told travelBulletin, also paying tribute to his long-time partnership with APT founder Geoff McGeary, who has been a key source of inspiration and support. As well as the McGeary family, partners in AmaWaterways include the family of co-founder Jimmy Murphy of Brendan Vacations, while more recently the company has also taken investment from private equity firm Certares, managed by Colin Farmer who was also on board for the celebration. AmaMagna is the 22nd vessel in the AmaWaterways fleet, with another newbuild coming in 2020 and two more ships scheduled for delivery in 2021.

Creation of the AmaMagna has not been without its challenges. The extra width of the ship means it cannot traverse the key Rhine-Main-Danube canal in Germany — so the 22m-wide hull had to be transported by a gigantic freighter from its shipyard in Serbia all the way to Amsterdam. Once fitted out in the Netherlands it was once again taken by sea back through the Bosporus and into the Black Sea where she sailed up to her Danube home. Ama is at this stage non-committal about whether it plans to create more double-width ships, and is carefully evaluating consumer demand for the AmaMagna to help make a decision. But Schreiner did confirm that one of the 2021 slots could be adapted to deliver another double-width ship.

APT is offering the full array of AmaWaterways itineraries for 2019 and 2020, and next year has also taken an exclusive two-week charter for a unique itinerary which will carry Australian passengers down the lower Danube to the Black Sea.