According to Airbus, the A220 family boasts the title of most efficient aircraft currently operating in its class, thanks to its Pratt & Whitney PurePower turbofan engines, which deliver 20% lower fuel burn per seat than previous-generation aircraft and produce the lowest noise levels of any commercial jet in production, making it ideal for urban operations and noise-sensitive airports.

Additionally, the A220 has the biggest cabin in its size category and offers passengers an improved flight experience, including wider seats (18+ inches), more spacious overhead bins, and extra-large windows. 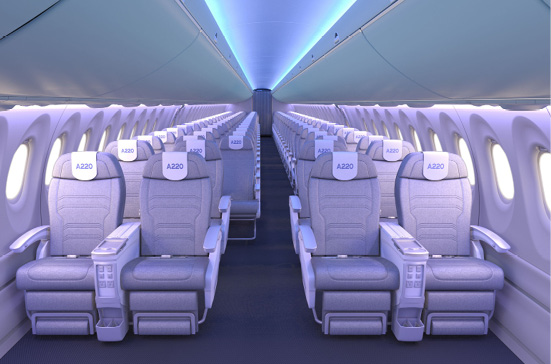 With a range capability of up to 6,300km, the A220 is suitable for short- to medium-haul operations as well as longer-haul flights to Australia and New Zealand, making the ideal aircraft to service the Pacific region.

After ordering four of the new aircraft, Air Vanuatu will be the launch operator of the A220 in the Pacific region after it takes delivery of its first plane in June 2020. The airline has expressed plans to deploy the A220 aircraft on its current international and domestic network, including the recently announced non-stop Melbourne-Port-Vila service, as well as using the new additions to help expand its network to new destinations throughout the South Pacific.

There are currently 90 A220 aircraft in operation, and as of the end of September this year, there are 525 on order worldwide.