ASIA Pacific Incentives and Meetings Event (AIME) opened its doors from 18–20 February at the Melbourne Convention and Exhibition Centre, showcasing the “reimagined event to the global meetings events industry”.

This year AIME welcomed over 300 exhibitors from 20 countries, with over 8,400 appointments made with global event management professionals, making it the “region’s largest and most significant exhibition for the meetings industry”.

With over 2,500 total attendee registrations, the 2019 event saw 50% more hosted buyers than the previous year; with 62% coming from outside Australia and 55% never attending AIME before.

“With a rich history spanning 27 years, AIME has been at the heart of the business events industry in the Asia Pacific region,” said Jay Martens, Event Director, Talk2 Media & Events.

Evolution of the AIME Knowledge Program, sponsored by the Melbourne Convention Bureau (MCB), saw it be the largest Business Events education program in Australia, where 500 participants engaged in a variety of sessions curated in partnership with AIME’s strategic education partner, Professional Convention Management Association (PCMA).

“The planning and reshaping of AIME 2019 has been a momentous journey with Talk2Media over the last 12 months,” said Karen Bolinger, CEO Melbourne Convention Bureau. “The business events industry has been vocal about what they’d like to see at AIME and Talk2Media have worked with us closely to build an event that will be significantly different than previous editions.” 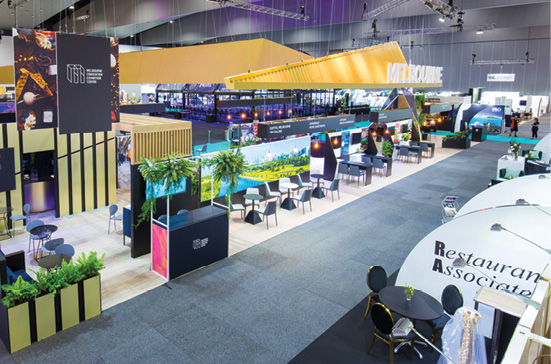 Hosted buyers attending AIME were welcomed at Melbourne’s newest event space The Timber Yard in Port Melbourne for the “Uncover Melbourne: Hosted Buyer and Media Cocktail Party”. In welcoming the 300 plus guests, Bolinger detailed the bureau’s commitment to working collaboratively with all partners and the business events industry on supporting initiatives that strengthen the city’s eco-credentials.

Additionally, the Welcome Event acted as a launch platform for Ormond Collective, following its refurbishment. The Art Deco Ormond Hall was transformed into “a kaleidoscope of colour”.

“The heritage of the AIME Welcome Event has always been one of networking and fun,” said Bolinger.

For the eighth year running Hawai’i Tourism Oceania (HTO) shared the spirit of Aloha at the event with seven key partners attending from The Hawaiian Islands.

Giselle Radulovic, Country Manager Australia for HTO, said AIME is one of the team’s key annual events to showcase Hawai’i as a destination for memorable events.

“Business events is a key focus for both Hawai’i Tourism Oceania and the Hawai’i Tourism Authority globally,” said Radulovic, adding “On average, Australians who travel to Hawai’i for conferences and events spend more than their leisure counterparts.”

Another key player at this year’s trade show was New Zealand. Conventions and Incentives New Zealand (CINZ) Chief Executive, Sue Sullivan said billions of dollars are being pumped into their two largest cities and the results are now starting to show.

“Auckland and Christchurch are well underway with new convention centres putting us high on the consideration list for international conference organisers,” she said.

Exhibiting for the first time at AIME, Sudima Hotels is set to double its New Zealand portfolio in the next 18 months to six hotels, including three new-build properties currently under construction in Christchurch City, Auckland City and Kaikoura.

“At the core, we are about business events and incentives, and providing the best access to key decision makers and the people who make it all happen,” said Bolinger, adding “I’m looking forward to hearing of the outcomes from new business connections made across the Asia Pacific Region.”