Increasing demand for more suites on its ships and refreshed interior spaces has seen Uniworld Boutique River Cruise Collection commit to making a “significant investment” in the overhaul of the company’s fleet of Europe-based vessels.

Last month, after 140 days at the Van Tiem shipyard in Druten in the Netherlands, Uniworld’s River Beatrice emerged following a top-to-tail transformation to become the company’s fifth “Super Ship” — and first existing vessel to receive the enhancement. Uniworld currently has a dozen ships operating on European waterways.

From Wolfgang’s bar and lounge aboard Super Ship Beatrice on the Danube during the ship’s maiden voyage from Budapest to Giurgiu under her new branding, Uniworld’s CEO Ellen Bettridge detailed the level of work involved in the overhaul to travelBulletin.

“Everything is new here. The yacht-like finishing, this style of ceiling was not here, the lighting was not here — this whole room was gutted and redone,” Bettridge explained. “Downstairs and the dining room, completely gutted and redesigned. This nose, this room right here [she said pointing to the bow of the ship at Schubert’s cafe, didn’t exist at all. 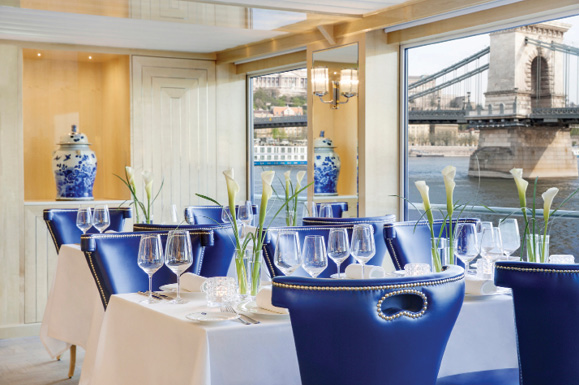 “Previously the ship didn’t have a nose, so we now have a whole new space as well.”

“We’ve taken some cabins out [seven in fact] and we’ve added larger suites. We also added in Max’s at the back. That used to be a little lounge at the back which really wasn’t utilised very much and so now we’ve made it into a fantastic space with a bar and restaurant, and there’s an outdoor sitting area right at the stern which is pretty cool,” Bettridge said.

While in drydock, SS Beatrice was also fitted with a new marble staircase, lavish Murano chandelier in the foyer, and an outstanding collection of artwork from Pablo Picasso, Alexander Calder and Pino Signoretto throughout.

Bettridge was tight-lipped about the specific spend Uniworld has ploughed into SS Beatrice‘s refit, confirming it was a “multi million dollar investment”.

She said demand for suites across the line’s fleet was robust. “Over and over again we’ve heard from past guests that they want suites. We’ve also heard they want adjoining rooms, so that has been added on the Danube Deck for the family and multi-generational markets”.

During the voyage, Bettridge also confirmed to travelBulletin that Uniworld would be upgrading two additional ships in its fleet to the Super Ship status for the 2019 season, River Empress and River Royal, with the remaining five vessels in its European fleet also expected to receive multi-million dollar overhauls in coming years.