Travel Partners ramps up the numbers

TRAVEL Partners broke new ground last month by holding its first annual conference overseas in Bali, doubling the number of guests that attended its corresponding gathering in Sydney last year from 75 to 150.

The three-day event adopted the theme “Partners to your Success”, with the independent travel agent network putting together a full schedule of presentations featuring talks from key suppliers, novel networking sessions, agent advice panels, team building activities, and a glamorous gala awards night to recognise its best and brightest.

Newly appointed General Manager Kate Cameron told travelBulletin the annual event serves as an important touchstone for agents to learn from each other’s experiences, as well as reinforce the support tools that Travel Partners makes available to its network.

“It really is about bringing everyone together, the strength of our network is the people and because they are home-based agents it’s about getting them to meet each other because we want them to have that connectivity,” Cameron said. 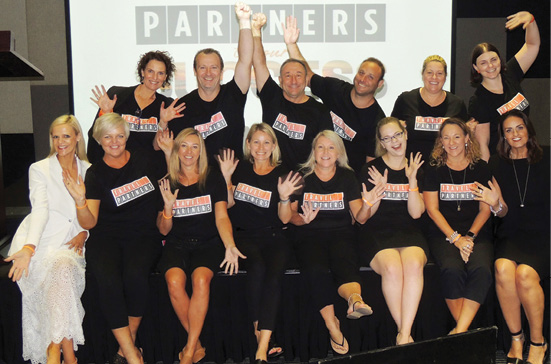 “The theme this year was about understanding what success means, it was about pushing the boundaries and knowing how you’ve reached success and doing those small things differently and getting really good at them,” she added.

Further highlights from the three-day conference an industry update from Chief Executive Officer of the Australian Federation of Travel Agents (AFTA) Jayson Westbury, as well as a crowd-pleasing and wonderfully self-deprecating keynote speech delivered by Aussie author and sports enthusiast Mick Colliss about never giving up on your dream.

Agents were also brought up to speed by Flight Centre’s General Manager of Premium Leisure Brands Danielle Galloway on how Travel Partners have been performing over the last 12 months, with direct links drawn between the company’s acquisition by Flight Centre in August 2017 and its strong growth across key metrics such as agent acquisition and Total Transaction Value (TTV).

“We will end this financial year on close to 300 agents in our network,” she added.

Travel Partners’ Managing Partner Jeff Hakim believes the backing of Flight Centre has also helped to deliver a high calibre of new recruits into the business.

“The proof is in the pudding,” Hakim said.

“We can see from the numbers and the quality of people that have come on board, we are getting entrepreneurial types of agents coming through,” he added.

Further consolidating this growth trajectory has been a recent recruitment push by Travel Partners to bolster its leadership structure, appointing several new sales staff, as well as key personnel across its finance, account management and marketing departments.

“The sales team was definitely something that was missing at Travel Partners,” Danielle Galloway said.

“We recruited six sales people and now they are out there talking to people, telling people about the Travel Partners story and the brand has definitely been enhanced by having them on board.”

Travel Partners’ Managing Partner Jeff Hakim was optimistic in his assessment of how the company will perform over the 12 months, telling travelBulletin “We want to double the number of agents, we’ve done it before so let’s do it again”.

Travel Partners will continue its push to host its annual conference in international destinations, announcing its 2020 event will take place in Hong Kong.