Touring is alive and well

Long the mainstay of the travel sector, it seems that growth in coach holidays has in recent years been eclipsed by the huge expansion of ocean and river cruising — not to mention FIT and self-drive touring booked online. However there’s plenty of life in touring, as revealed by the latest travelBulletin/Travel Daily industry survey. Bruce Piper reports.

Remember the Australian Women’s Weekly World Discovery Tours? The brainchild of AFTA’s founding president Frank Johnson, who ran World Travel Headquarters, for about two decades these holidays took Australians on a trip which for many was their first and last experience abroad. The initial 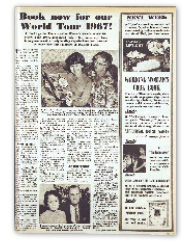 Australian Women’s Weekly World Discovery Tour took place in 1966, and was such a success it sold out in just four weeks. It’s no wonder these trips were so popular– a promotional flyer for the 1967 tour confirms pricing starting at just $1,392 per person for 18 weeks away, including a P&O cruise to and from Europe, a 23-day all-inclusive coach tour of eight European countries, a seven-day tour of England and Scotland plus sightseeing in London. Accounting for inflation, that’s about $17,600 in today’s dollars — not bad for a 126-night trip of a lifetime!

Fast forward to 2017, and despite the attention given to other sectors, coach touring seems to be very much alive and well. The Travel Corporation, which operates brands including Trafalgar, Insight Vacations, Contiki, Costsaver and AAT Kings, has worked hard to reinvent the terminology around the sector, describing its range as “guided holidays” and emphasising the unique “Insider Experiences” it offers — with its initiatives imitated by several operators. Other innovations in recent years have included the move by Bunnik Tours to limit its maximum group size to just 20 passengers — still with full-sized coaches — while other operators stress features such as the leisurely pace of their tours, guaranteed departures, expert guides and access to local activities.

Last year The Travel Corporation upped the ante with the launch of Fly Free deals in conjunction with its products, which by all accounts was a huge success. Other operators quickly followed with their own Fly Free offers or air credit deals, and by all accounts the move has breathed new life into the sector. There’s no doubt that a coach tour can offer significant advantages, enabling access to scarce accommodation, unique sightseeing led by a local expert and in most cases working out much cheaper than booking a tour independently.

From a travel agent’s point of view coach tours offer relatively high levels of commission, and also make the most of a consultant’s ability to coordinate flights, transfers, pre-and-post tour accommodation and dovetail with other products.

But what to do agents think about the touring sector overall? 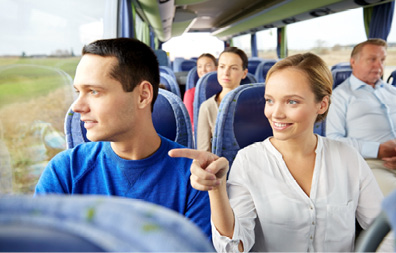 travelBulletin and Travel Daily commissioned Stollznow Research to conduct a poll of travel agents who sell coach touring and other land-based product such as rail and self-drive holdays, with the study undertaken in January this year. Only those who had sold a tour in the last six months were included in the data, with participants incentivised with an offer of a Fitbit Charge 2 and Event Cinema passes. Consultants from across Australia participated, and Helloworld agents provided the largest number of responses at 29%, with Flight Centre just behind at 24% of the total. There was participation across the board from other agency groups too, including Magellan, Express Travel Group, Travellers Choice and all of the home-based networks.

Interestingly, 29% of those surveyed said their sales of touring had increased in the last year, while 48% had seen no growth in the sector, and 23% had seen a decrease. We asked them what the key issues were around selling coach tours, with the biggest factor cited being competition from river cruising, mentioned by 59% of those surveyed. In fact cruising was the major impact on coach touring, with ocean cruising in second place, cited by 55% of respondents as a key competitor for the hearts and minds of potential touring clients. However the sector also still appears to be grappling with issues of perception, with significant numbers of respondents describing it as an “old fashioned type of holiday” or having a “poor image”. See graph below. 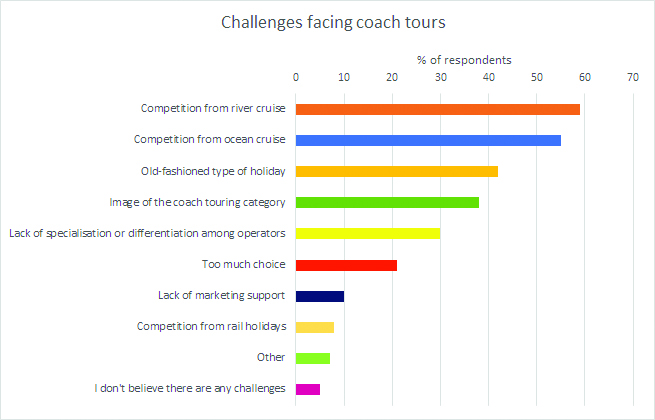 In terms of coach tour brands regularly sold, Trafalgar was the most popular at 56%, followed by APT with 52%, just ahead of Globus with 51% and Cosmos at 46%. AAT Kings and Insight Vacations were tied at 44%, while Scenic was in seventh spot, sold by 40% of the respondents. Rounding out the top ten were Intrepid and Wendy Wu Tours with 33% each, and Back-Roads Touring at 32%. We asked the agents what their perceptions were of the various brands and how they supported the travel trade in areas such as sales representation, solving customer problems, clear pricing, call centre service and innovative products. In these categories the survey didn’t highlight any outstanding performers, with most operators competently servicing travel agents. The top rated suppliers in terms of sales representation were Collette, Tucan Travel, Adventure Destinations, Sundowners Overland, APT, TravelMarvel and Helen Wong’s Tours, but the results across all operators were quite similar, without any particular standout performers. See graph below. 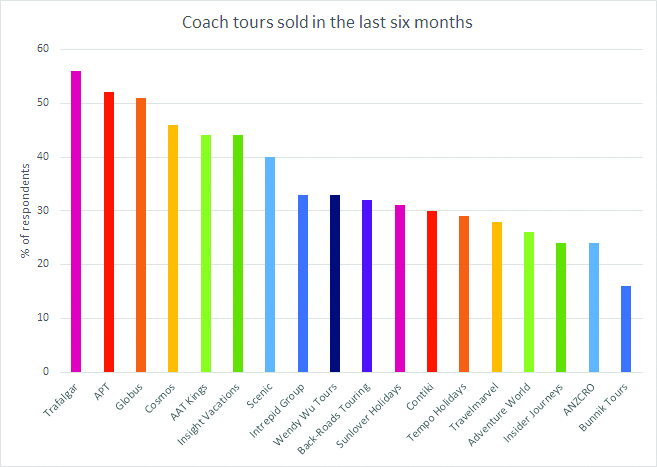 However in other areas the travel agents surveyed described significant differences between the various operators. For example, APT and Travelmarvel performed significantly better than other companies in terms of training and development for the trade, with others ranking well in this area including On The Go Tours, Trafalgar, Scenic and Wendy Wu. Commissions were also an area of differentiation, with respondents ranking APT, Contiki, Trafalgar, Globus, Insight and AAT Kings as above average. In terms of offering great specials, deals and promotions, Trafalgar was the top ranked operator, with other good performers including Contiki, Scenic, APT, Insight, Travelmarvel, Evergreen Tours, Globus and Asia Escape Holidays. Travel agent familiarisation trips were another area where respondents clearly saw differences, with The Africa Safari Co perceived as offering regular educationals, along with On The Go Tours, Scenic, APT, Intrepid and Trafalgar. 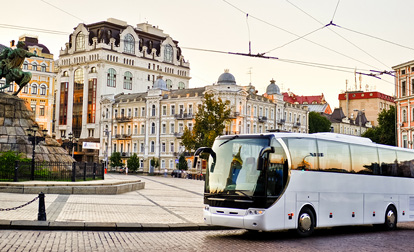 We also asked the agents which brands their clients most regularly asked for by name — an indication of the power of the brands in the consumer market. Scenic and APT were both leaders in this area — unsurprising given the huge amount of promotional activity they undertake in the consumer space. Other brands which performed well here included Contiki and Trafalgar, again companies which promote heavily to consumers — and after these top four there was a gap, with decreasing numbers of clients asking for Insight Vacations, Top Deck, Wendy Wu Tours, Globus, Travelmarvel, Evergreen and Cosmos.

The research also asked questions about the sale of rail products by travel agents. Clearly a strong sector, 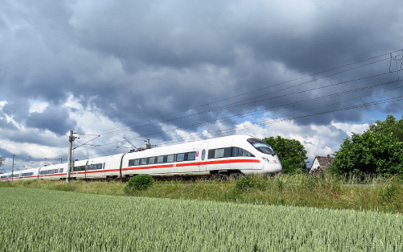 almost three quarters of the coach touring-selling respondents to the survey had also sold rail — and interestingly there were less perceptions of competition for rail tours, with a third of the agents saying they didn’t believe there were any challenges. However some respondents described barriers posed by timetabling, with operators not releasing schedules far enough in advance. Others cited a lack of availability on some train departures, while some said prices for rail were becoming too high, with coach tours perceived as offering better value.

Canada was a standout performer, with Rocky Mountaineer and VIA Rail featuring strongly in the results. Rocky Mountaineer was far and away the most popular rail product, sold by 48% of the respondents, while the various rail wholesalers including Rail Tickets, Rail Europe/Rail Plus, CIT Holidays and Infinity Rail also showed strong responses. Interestingly domestic product also featured strongly in the results of the rail survey, with Great Southern Rail sold by 39% of respondents, along with Queensland Rail Travel which had been sold by 13% of the sample.

The top rail performer in terms of sales representation was International Rail, with agents also hailing the support provided by Trans Siberian Tours, Rail Europe/Rail Plus, Belmond, CIT Holidays and Africa’s Rovos Rail. Rocky Mountaineer was the highest rated supplier when it came to excellence in training and development, followed by Infinity Rail and Rail Europe/Rail Plus. Belmond, Rocky Mountaineer and Great Southern Rail were the leaders when it came to competitive commissions, while Infinity Rail was way ahead when it came to hosting regular familiarisations for travel agents. As you would expect, given its strong TV and newspaper presence Rocky Mountaineer was the brand most commonly asked for by name, followed by Great Southern Rail — and funnily enough Victoria’s iconic Puffing Billy came in third position in terms of consumer brand recognition.

ON THE ROAD AGAIN

The third land category in the poll was self-drive holidays — another key opportunity for travel agents. Again almost 75% of respondents had sold a self-drive or car rental product in the last year, with DriveAway Holidays by far the most popular, significantly ahead of any of its rivals. Some of the agents sold globalCARS product — and gave the wholesaler top rankings when it came to customer service. However the overall achiever in almost every metric was DriveAway, which was top rated for commission, clear pricing, training, call centre service and solving post-rental problems.

Self-drive holidays also appear to be on the rise, according to 27% of respondents, while the majority (64%) said they had stayed the same over the last 12 months and just 8% said they were had declined. The survey also asked about client brand name recognition, with Avis leading the pack, cited by 71% of respondents — slightly ahead of Hertz at 64%. The two leaders were significantly ahead of third placed Europcar, mentioned by 29% of agents as asked for their clients.

The Council of Australian Tour Operators (CATO) has made great strides in recent years, with land-based wholesalers and tourist offices banding together to provide a single voice for the industry — and in particular to highlight the advantages for travel agents of using a locally based operation so their clients are well looked after. However despite a number of recent publicity campaigns — and an initiative where members have been encouraged to use an individually numbered CATO logo in their collateral — just 39% of respondents to the survey said they were aware of the organisation. About a third said they had seen the CATO logo, while 20% said they were unfamiliar with it and 44% said they weren’t sure. Clearly there is further work to be done here. 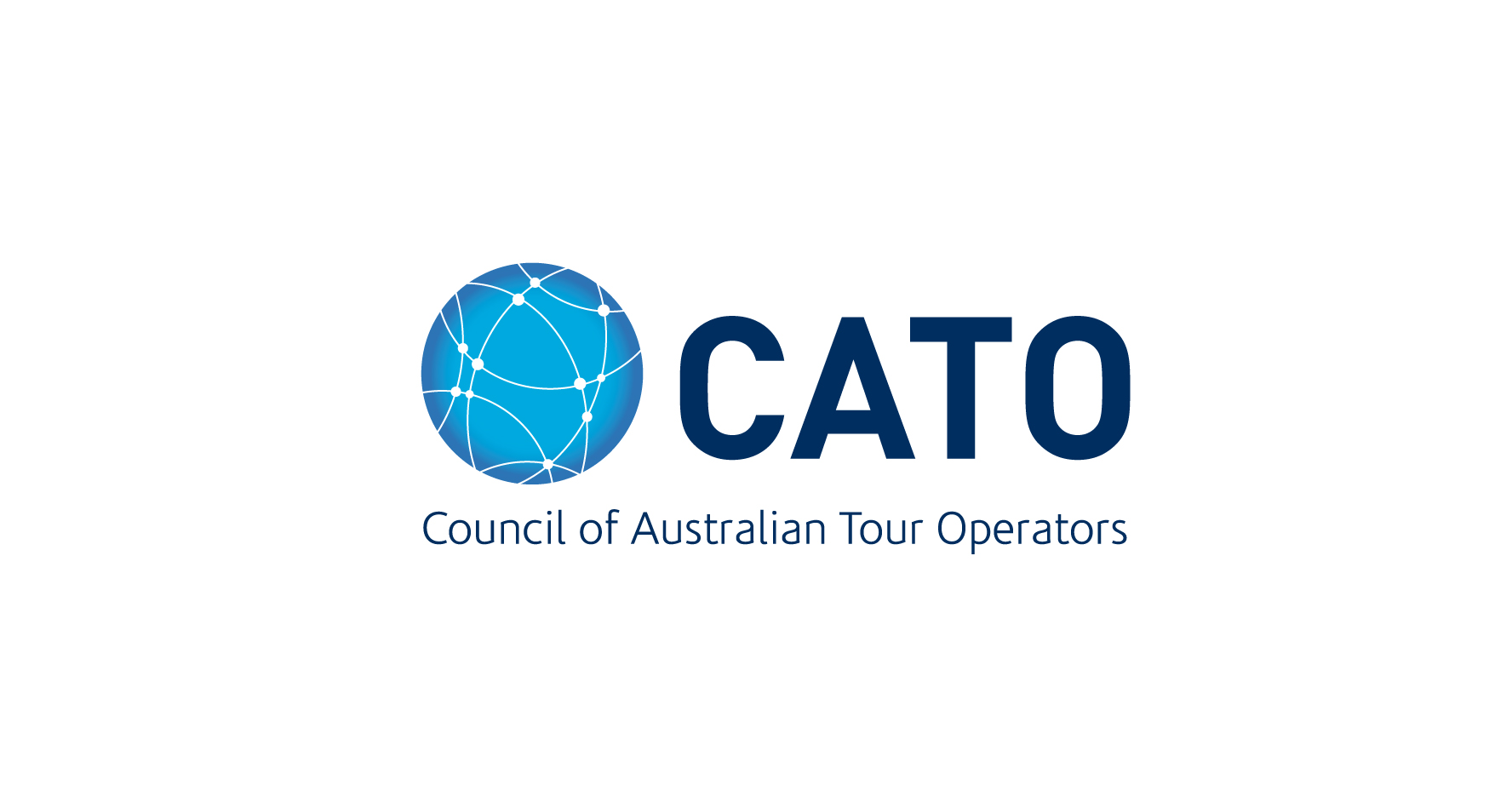 Travel agents are hungry for knowledge, and the survey found an extremely high proportion (84% of respondents) would be interested in a formal certification and accreditation program for land travel. The cruise sector has this well wrapped up with CLIA’s extensive product training suites, and clearly there is an opportunity here to increase the overall professionalism of the travel sector. One of the key criteria of the AFTA Travel Accreditation Scheme (ATAS) is workforce development, with participants in the program asked to specify how many of their front line travel sellers have a qualification such as a Certificate III in Travel or above. Perhaps some sort of formal certification relating to land product and/or destination training could be used to feed into this in the future, so that consultants who make the effort to learn about the various features of different travel products can have their expertise formally recognised, in a way that also assists their employers to meet the ATAS criteria. A strong majority of respondents (84%) also said they were interested in attending a conference relating to land travel — clearly something that’s needed for the touring sector and perhaps an opportunity for the industry — so watch this space!