MARRIOTT International has announced the signing of two new properties in the Western Sydney suburbs of Auburn and Blacktown, expanding its suburban reach through a partnership with property developers T1 Constructions.

The additions include the Courtyard by Marriott Sydney, Auburn and the Four Points by Sheraton Sydney, Blacktown, and are slated to open in 2023 and 2024 respectively. Marriott Senior Director of Hotel Development, Richard Crawford, said the new signings “reflect Marriott International’s strong commitment to the travel and tourism industry here in Australia”. 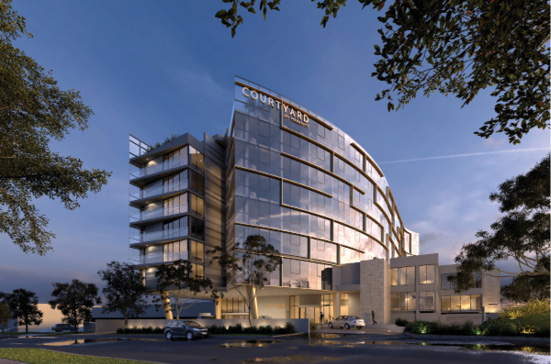 A render of the Courtyard by Marriott in Auburn, NSW

“During these unprecedented times our ongoing goal remains to grow our business and to strengthen our offering in this region,” he said, with the new additions seeing Marriott strategically expanding its footprint into growth corridors outside Australia’s metropolitan areas.

The new Auburn property will have 203 guest rooms as well as several signature Courtyard by Marriott amenities including The Bistro all day fast-casual restaurant and the 24/7 Market grab-and-go cafe. Meanwhile Four Points by Sheraton Blacktown is being pitched as ideally located for guests to access the Blue Mountains, the new Sydney Zoo, Raging Waters Sydney water park and the soon to open Western Sydney International Airport.