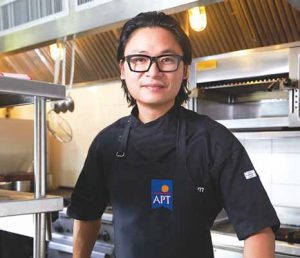 IF THERE’S one thing that makes Luke Nguyen uneasy, it’s the term “celebrity chef”. The softly spoken restaurateur talked to travelBulletin during a recent APT river cruise in Europe, and understatedly described the amazing journey he has taken since launching his first restaurant in Sydney about 15 years ago, at the tender age of 23. Red Lantern, now described as “the world’s most awarded Vietnamese restaurant” was created because Nguyen had a passion to share the cuisine of his parents’ native country with Australians. He was born in a refugee camp in Thailand and ended up settling with his family in western Sydney where his passion for cooking was awakened.

Despite the denials of his celebrity status there is no doubt Nguyen is a star. He runs his own television production company which has created shows such as Luke Nguyen’s Vietnam and Luke Nguyen’s France, which are televised in 150 countries including on SBS in Australia. There’s also a second Red Lantern restaurant, and he has written four best-selling cookbooks. Oh, and by the way, he also runs a cooking school in Ho Chi Minh City and happens to be a judge on the Vietnamese version of MasterChef.

Nguyen is also an ambassador for APT – a relationship which grew from his own passion to experience Vietnam on a regular basis. “I used to close down Red Lantern each Christmas so I could travel,” he said. “People said I was mad to not open during the busiest part of the year. But eventually the customers who asked why I was closing wanted to come to Vietnam with me”.

In the early days he had five travelling companions but “every year it got bigger and bigger”. Nguyen eventually sought out a travel partner and the role with APT was born. “I wanted to find a partner to allow me to do what I wanted to do – offer real local authentic experiences,” Nguyen said. He still personally escorts APT tours to Vietnam twice a year – taking guests to his favourite spots including a restaurant where insects are the staple food. He also develops menus for APT’s river cruise product in Asia, including its voyages on the Mekong and Myanmar.

His travel connections have also seen Nguyen linked with Etihad, where he is again an ambassador and passionately spoke about the carrier’s commitment to fine dining in the sky. There’s also a relationship with Singapore’s Tiger Beer, with the portfolio all fitting into his self-description as a “gastronomic traveller”. It’s hard to imagine Luke fitting more into his busy life – but he and his partner are also now the proud parents of two baby twin boys.

What’s next? More travel certainly seems to be on the agenda, with Nguyen enthusing about a trip he conducted to Japan a few years ago where he visited all of the “Iron Chef” restaurants run by the stars of the famous cooking show. “It was just a one-off, but I’d love to do more of that sort of thing.”