ONGOING protests in Hong Kong that kicked off back in March have not only posed a major moral and logistical challenge for the Hong Kong Government, but have also sent major tremors through the global business market — the travel sector being no exception.

Pushing back against a proposed extradition bill that many believe would have ramped up the Chinese Government’s control over the Special Administrative Region, Hong Kong citizens have carried out a series of demonstrations that have raged periodically now for several months.

Perhaps impacting on the travel industry most severely has been the Hong Kong International Airport becoming a major staging ground for the protests, a strategy the movement has been deploying to maximise the exposure of their plight to an international audience. The resulting fallout has seen the major aviation hub completely shut down on a number of occasions, throwing travellers’ schedules, airlines and accommodation providers through a loop as all stakeholders scramble to make alternative travel arrangements.

With Hong Kong being a major stopover airport for travellers heading north to popular destinations in Europe, the implications of the Hong Kong unrest in Australia has been obvious and real.

Macquarie Bank’s wealth management arm hasn’t minced its words, drastically cutting Sydney Airport’s 2019 earnings forecast before interest, taxation, depreciation and amortisation by a sizable $3 million, citing a significant drop in people flying between the two cities as the primary driver of the downgrade.

And while airlines have been doing their best to maintain a ‘business as usual’ attitude, carriers have inevitably had to adapt to the fluid situation by modifying their services. Qantas for example has been forced to put on smaller planes on all routes from Sydney, Melbourne and Brisbane to Hong Kong, and since the start of September Australia’s flagship airline has been flying Airbus 330-200s with 271 seats rather than an Airbus 330-300s with 297 seats. 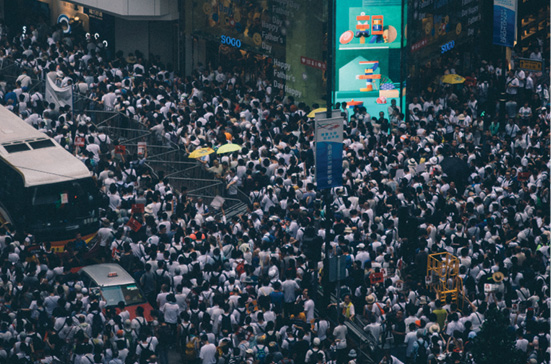 But it should come as no surprise that the protests have had the largest impact on tourism in Hong Kong itself. The latest figures released by the Hong Kong Tourism Board paint a fairly grim picture, showing a 4.8% drop in visitor numbers in July when compared to the previous corresponding period.

Further dents can be seen in Hong Kong International Airport’s passenger numbers for August, down by 12.4% from August 2018 according to the Airport Authority Hong Kong. The city’s main carrier Cathay Pacific recently admitted that “tourist arrivals into the city were nearly half of what they usually are”, with the airline’s Group Chief Customer and Commercial Officer Ronald Lam conceding inbound Hong Kong traffic was down 38% and outbound was down 12% year-on-year.

Hong Kong hotel figures perhaps show the extent of the impact in its most unvarnished form, with August hitting all-time low occupancy rates according to STR data. Year-on-year comparisons show revenue available per room plummeted by 44.6% to HK$694.15, while occupancy also haemorrhaged 29.8% down to 63.9%. Despite a supply spike of 1.5%, demand has also tumbled badly by 28.8%.

Despite officially scrapping the controversial extradition bill early last month, Hong Kong Chief Executive Carrie Lam still faces the prospect of ongoing demonstrations as the city’s citizens continue to demand more government action on key democratic issues, including the release and exoneration of political prisoners and the establishment of an inquiry into police behaviour. With so much tension unresolved and the character of the protest movement showing few signs of softening, it appears the travel sector may need to brace itself for much more disruption to come.