The four-day event was aimed at rewarding agents from Australia and New Zealand who sold the most of Helloworld’s wholesale product, and the program didn’t disappoint, taking agents to many of the city’s most iconic landmarks, such as the top of the 830m Burj Khalifa, luxury helicopter rides above the city centre, chartered yachts through many of the city’s lauded waterways, and a 4WD drive adventure through the dunes of the Dubai Desert. 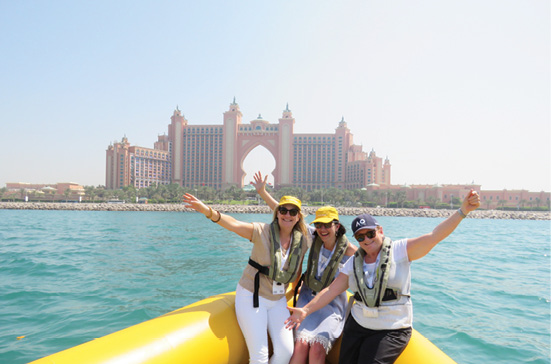 “Global STARS in a number of forms has been going for a long time…and there are many who have been in it almost since its inception and it’s almost like a group of old friends that get together every year,” Brady said.

“Obviously there’s some new people that come in and out all the time but there is a core group from all over the country,” he added.

When asked why Dubai was chosen as the location to host Global STARS in 2019, Brady said the event represented an opportunity to challenge the perception that Dubai is simply a stopover point for Aussie travellers.

“Dubai is a destination in itself but it’s not seen that way by most Australians, people just tend to transit through so there is a great opportunity to give exposure to a region with a strong potential for growth,” Brady said.

Helloworld capped off the United Arab Emirates adventure with a glitzy gala awards night held at the famous sail shaped Burj Al Arab Jumeirah, where prizes were handed out to the group’s best and brightest throughout the night.

On the same night it was revealed the next Global STARS event will be held at Hayman Island in the Whitsundays. To qualify, agents must bring in the most departed sales between 1 July and 30 June 2020 on Helloworld’s range of non-cruise wholesale brands.

Further experiences enjoyed on the trip included a visit to the giant waterpark at Atlantis, Legoland Dubai and a trip to the mammoth Dubai Mall — home to a giant LED TV screen and aquarium.