IT'S just over 12 months since the formerly fast-growing Excite Holidays ceased to be part of the AFTA Travel Accreditation Scheme - a move described at the time as a "voluntary withdrawal". Curiously, Excite's high-profile directors, Nicholas Stavropoulos and George Papaioannou, have never made any public statements about the company's pullout from ATAS, despite multiple approaches at the time from Travel Daily and travelBulletin -- and in stark contrast to the enthusiasm with which they approached the scheme when Excite was first accredited back in 2014.

IT’S just over 12 months since the formerly fast-growing Excite Holidays ceased to be part of the AFTA Travel Accreditation Scheme – a move described at the time as a “voluntary withdrawal”. Curiously, Excite’s high-profile directors, Nicholas Stavropoulos and George Papaioannou, have never made any public statements about the company’s pullout from ATAS, despite multiple approaches at the time from Travel Daily and travelBulletin — and in stark contrast to the enthusiasm with which they approached the scheme when Excite was first accredited back in 2014.

In fact back in December 2018, a Travel Daily “Year in Review” item which mentioned Excite’s loss of accreditation in the same story as a summary of the then extremely fresh Bestjet collapse, drew a swift response from Excite’s solicitors, claiming a “malicious attempt to impugn the reputation of our client” and threatening to sue for damages. We were put on notice to “not suggest that Excite Holidays is in any way similar to Bestjet Pty Ltd, or is likely to go into administration”.

A year on and how things have changed. Excite has indeed been placed into voluntary administration, and while the scale of the collapse is yet to be fully determined, the Administrator, Morgan Kelly from KPMG, has estimated the company owes as much as $35 million to lenders, travel agents, suppliers and various overseas entities.

Many agents, who trusted assurances from Excite Holidays that ATAS accreditation was irrelevant, have been left with furious customers, debts worth thousands of dollars and an extremely bitter taste in their mouths.

Although things became very serious over the Christmas period, it’s now becoming apparent that Excite had been in trouble for some time. Clients began arriving at hotels to find their bookings had not been paid for, with Excite blaming a “platform issue” for the problems. The company continued to accept new bookings right up to the day before its directors appointed KPMG as Voluntary Administrators, denied repeated claims about unpaid wages in its Bangkok and Athens offices, and even told its local BDMs to have an extra week’s Christmas holiday and to turn their phones off so they didn’t have to take calls from frustrated travel agents.

Even when bookings were closed off on Thursday 9 January, Stavropolous told staff it was because of “discussions with potential investors”. At the same time, Virtual Credit Cards used to secure bookings, were being denied due to a lack of available funds, and incredibly agents were just told to get their clients to pay again and “lodge a service complaint” with Excite to request a refund. 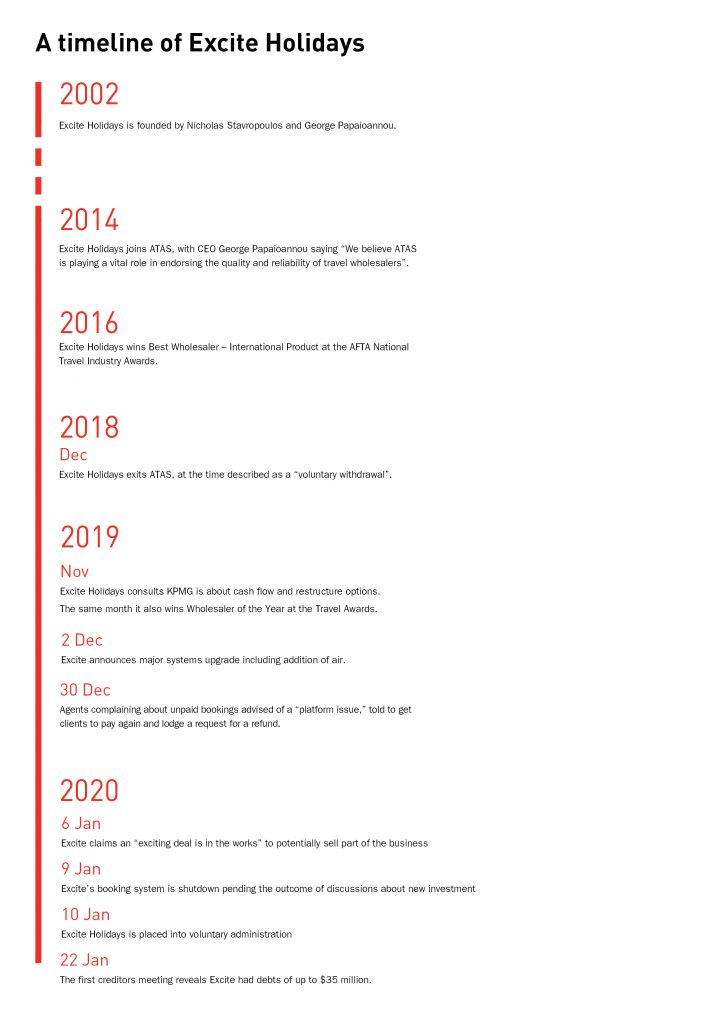 It now appears that this was just the tip of the iceberg for Excite’s tangled web of corporations, with the Administrators having to work hard to verify exactly which company agents were dealing with.

The now defunct Excite Holidays website appeared to indicate that Singapore-based Excite Holidays Pte Limited was behind the business — but invoices issued to consultants had the ABN of the Australian entity, Global Travel Specialists Pty Limited — which in turn was owned by Global Travel Holdings. And that’s not to mention entities overseas, with the company employing staff in Athens and Bangkok as well as having sales operations in the UK and USA.

Agents were particularly outraged when Travel Daily exclusively revealed that another company called TravelYou.com was just about to launch in Australia, with exactly the same directors as Excite Holidays Pte Limited. The earlier failure of online advertising venture Adlux of which Nicholas Stavropolos was CEO, and the 2013 administration of ASX-listed Mooter Media, chaired by Stavropoulos and propped up briefly by another related company called Excite Digital Media, also garnered disbelief.

In the wake of Excite’s collapse — coming closely after the failure of Tempo Holidays and Bentours — AFTA has reiterated its stance, recommending that travel agency owners only work with reputable, accredited, wholesalers and tour operators.

“It is unacceptable that a company can make statements and issue press releases which turn out to be misleading and deceptive. AFTA is NOT to blame for the demise of these companies,” the Federation pointed out, adding that “poor financial management is the only cause of a company becoming insolvent”.