VIRGIN Voyages Founder Richard Branson was at his affable best when he officially launched the cruise brand to the Australian market last month.

Greeting the trade (referred to by Virgin Voyages as First Mates) at a special event at Cruise Bar in Sydney, the well-known “rule-breaking” entrepreneur marked the announcement by showering attendees with champagne from the upper decks of the swanky venue.

Speaking with travelBulletin on the night, Virgin Voyages Chief Commercial Officer Nirmal Saverimuttu said the cruise brand had done much to “clear the hurdles” for agents when it came to selling Virgin Voyages in Australia.

“We talk about setting sail the Virgin way, but we are also very much encouraging our First Mates to think about what it’s like to ‘sell’ the Virgin way,” he said.

“We’ve eliminated non-commissionable fares, we pay on everything, we’ve got lots of different things in place to make sure we are as brilliant to do business with,” Saverimutto added.

Adding further gusto to its national launch was the additional announcement that Virgin Voyages had forged a new partnership with Virgin Australia (VA), precipitating the start of a new “Tail to Sail” promotion.

Packages are now available through Virgin Australia holidays, with cruises taking place on board Virgin Voyages’ Scarlet Lady in 2020 able to be combined at special rates with VA flights from the Sydney, Melbourne and Brisbane to Miami.

Not lost in the midst of the fanfare surrounding the brand’s launch was a major hint dropped by Branson himself during the launch event, with the Virgin Founder telling the crowd he had recently met with the NSW Port Authority to discuss a potential Australian deployment of its ships down the track.

“Maybe in a year, or two, or three, bringing one of our cruise ships down here, they showed us exactly where it was going to go and we thought, yep that’s pretty good,” Branson enthused. 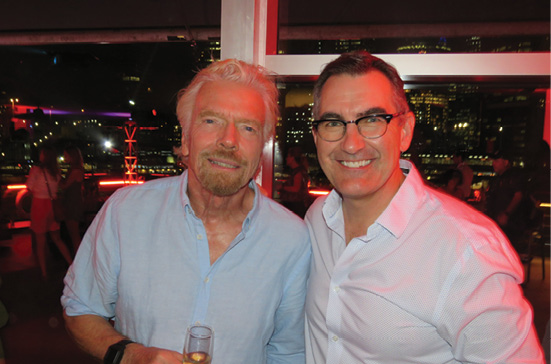