ATE19 touches down in Perth

ATE is Australia’s largest annual travel and tourism business-to-business event and was organised by Tourism Australia in partnership with host-state partner, Tourism WA.

“With unprecedented levels of investment in new hotels and infrastructure since ATE was last held here in Perth in 2012, this week has given delegates the chance to experience the city’s evolution as an exciting western gateway to Australia,” Tourism Australia Managing Director John O’Sullivan said.

This year’s event introduced new concepts and offerings, including the “Solutions Hub”, which created a space for organisations, buyers or sellers, that don’t fit the usual profile of the type of organisation that would come to ATE, such as technology products.

“It’s a new way of bringing different and new products into the conversation in a way that doesn’t distract from the day-to-day product that is there,” O’Sullivan told travelBulletin.

A Platinum Club also made its debut, offering 40-strong members who have showed long-standing support for the show a specialised famil program, exclusive networking events and premium accommodation.

Also new to the show floor was 10 premium DMCs, who were offered a dedicated program.

“We know that buyers attending ATE alone bring between 2.7 and 4 million passengers each year with an estimated pre-departure spend between $6 and $9 billion plus on the ground spend,” he said. 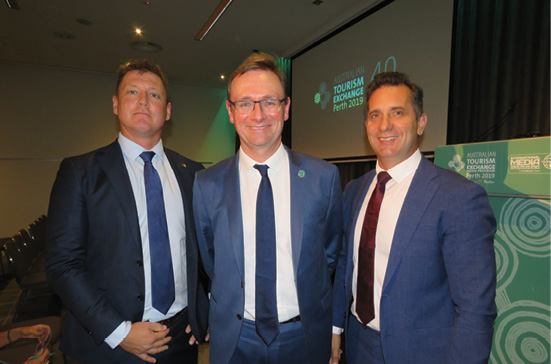 O’Sullivan told travelBulletin that the Australian tourism industry was in a “really good spot” ahead of the upcoming conclusion of the Tourism 2020 strategy.

The whole-of-government and industry long-term Tourism 2020 strategy was launched in 2011 and pinned the goal of achieving between $115-140b in overnight expenditure by 2020.

O’Sullivan told tB that Tourism Australia had reached the lower end of the overnight expenditure goal and was expecting to land at about $131 billion by the end of 2020.

In accommodation, Australia has exceeded the strategy’s target of between 6,000-20,000 new rooms, with around 30,000 new rooms on offer and many more in the pipeline, while in aviation, capacity is also ahead, he said.

Looking ahead, O’Sullivan identified an opportunity to reach between $180-250 billion in domestic and international overnight expenditure by 2030.