TRAVEL agents’ enthusiasm for selling cruise has not abated despite a slowing in the levels of growth as indicated in the latest wave of cruise industry research conducted by travelBulletin, Cruise Weekly and Travel Daily.

Nearly 270 agents spanning the retail travel landscape gave an average of 17 minutes time to complete the annual survey in August with the results providing many highlights for leading cruise brands servicing the Australian trade.

Just 44% of respondents believed the ocean cruise sector had grown for them in 2019, down from the 85% who said there was growth back in 2016.

Over one third (38%) of agents believe that sales have increased in the last 12 months. This is a minor increase on 2018 (33%) however when viewed over the past four years, the survey results suggest that the once booming sector has become sluggish. In 2019, 18% of agents say sales have decreased. This is the highest level in four years.

When asked to predict which regions would be in most demand in the future, agents indicated the polar regions (37%) would lead the way, followed by Baltic (30%), Australian domestic cruise (28%) and Mediterranean (24%). 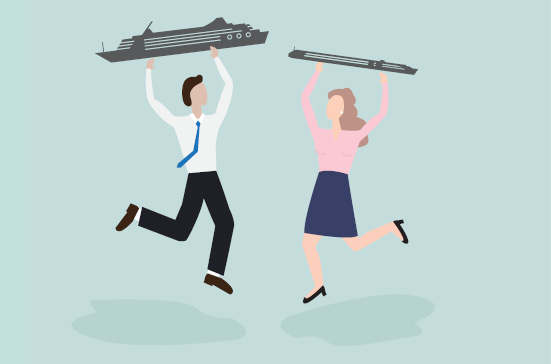 For the first time, market share estimates were generated with agents asked to recall their number of passenger sales over a given period. Leading the way in ocean cruise sales was Princess Cruises with an estimated 15% market share, followed by P&O Cruises (13%), Royal Caribbean (11%) and Carnival Cruise Line (9%).

In river cruising APT dominated with an estimated 20% share of the market, followed by Scenic (17%) and Viking (17%) with the balance of the market being fought out between Travelmarvel (10%), Uniworld (9%) and Avalon Waterways (9%), among others.

The survey revealed the strength of APT who rated highest for overall sales representation, solving customer problems, local area marketing and having an excellent management team.

When asked which of the cruise brands agents said was their favourite it was a two-way tie between Silversea Cruises and Regent Seven Seas Cruises for top honours for ocean cruising and Uniworld for river cruise.

Cruise wholesalers were also assessed, with Seven Oceans Cruising cited as the company most frequently booked with while Infinity Cruise topped the list for best customer service. The same brand was found to have the best array of product as well as the most competitive commission levels.

To enquire about the report, email research@traveldaily.com.au