QATAR Airways has found itself right at the epicentre of Australia’s fight against the spread of coronavirus, negotiating the maze of ever-changing restrictions as it maintained the country’s aviation links with the rest of the world over the last 12 months. The carrier has continued its operations despite the incredible complexities forced by the closure of international borders and hotel quarantine limitations, putting its local team on the front lines of repatriation efforts. What has been behind this stellar effort? Bruce Piper investigates.

Thomas Scruby became Qatar Airways’ Vice President of Sales for Pacific and North Asia in May 2020, with exquisite timing putting him in the eye of the hurricane for an airline which has continued to show its unique approach right through the pandemic. Scruby has responsibility right across the region, but is based in Melbourne where the local team has been forced to pivot from its focus on sales and marketing into what is practically a humanitarian role – because airlines have effectively been given the onerous responsibility of deciding who can fly into Australia.

The COVID-19 pandemic has had a massive human toll, particularly on the widely travelled Australian community where millions of our citizens originally came from overseas. Aussies’ propensity to travel and work abroad also saw many living abroad when COVID-19 hit, and while most were happy to initially stay put, clearly the longevity of the outbreak has seen that change and as has been widely publicised, tens of thousands really want to come home. In many cases the motivation is simply a desire to see family, but in others there have been some truly tragic situations where airline staff have been put in the position of having to choose who can travel and who can’t.

The reason, of course, has been our very successful hotel quarantine systems which have in most cases managed to catch COVID-19 cases at the border. But the limited spaces within quarantine have consequently led to massive restrictions on just how many people can enter the country each week — and that in turn has meant most inbound flights are only about 10% full. In the case of Qatar Airways and other airlines which have persisted with their local operations, these practically empty aircraft have continued coming to Australia despite minimal yields and fixed operational costs — putting these carriers into stark contrast with other competitors which during the pandemic’s first year simply put up the white flag and ceased operating their Australian services.

Qatar Airways’ dogged determination to continue operating saw it take the somewhat dubious honour of being far and away the largest international carrier operating in Australian skies in the early days of the pandemic. Official figures from the Bureau of Infrastructure and Transport Research Economics confirm the airline’s local market share surged from about 3% pre-pandemic to a whopping 44.5% a year ago. By contrast the grounding of the Qantas international fleet saw its former number one status drop to a tiny fraction of its previous capacity, despite operating a number of Australian Government-backed repatriation charter flights.

In fact, Qatar Airways clearly saw the thousands of Australians stranded abroad as an opportunity to serve the community and build its profile, adding 28 weekly flights in April 2020 on top of its normally scheduled 21 services to bring people home. With a massive global network the repatriations worked in both directions, and QR took thousands of foreigners out of Australia back to their own countries too. In an all-too-rare example of sense from our Government regulators, permission was also granted for Qatar Airways to temporarily commence operations into Brisbane after years of having its capacity to Australia limited to daily flights to three capital cities — Melbourne, Perth and Sydney. 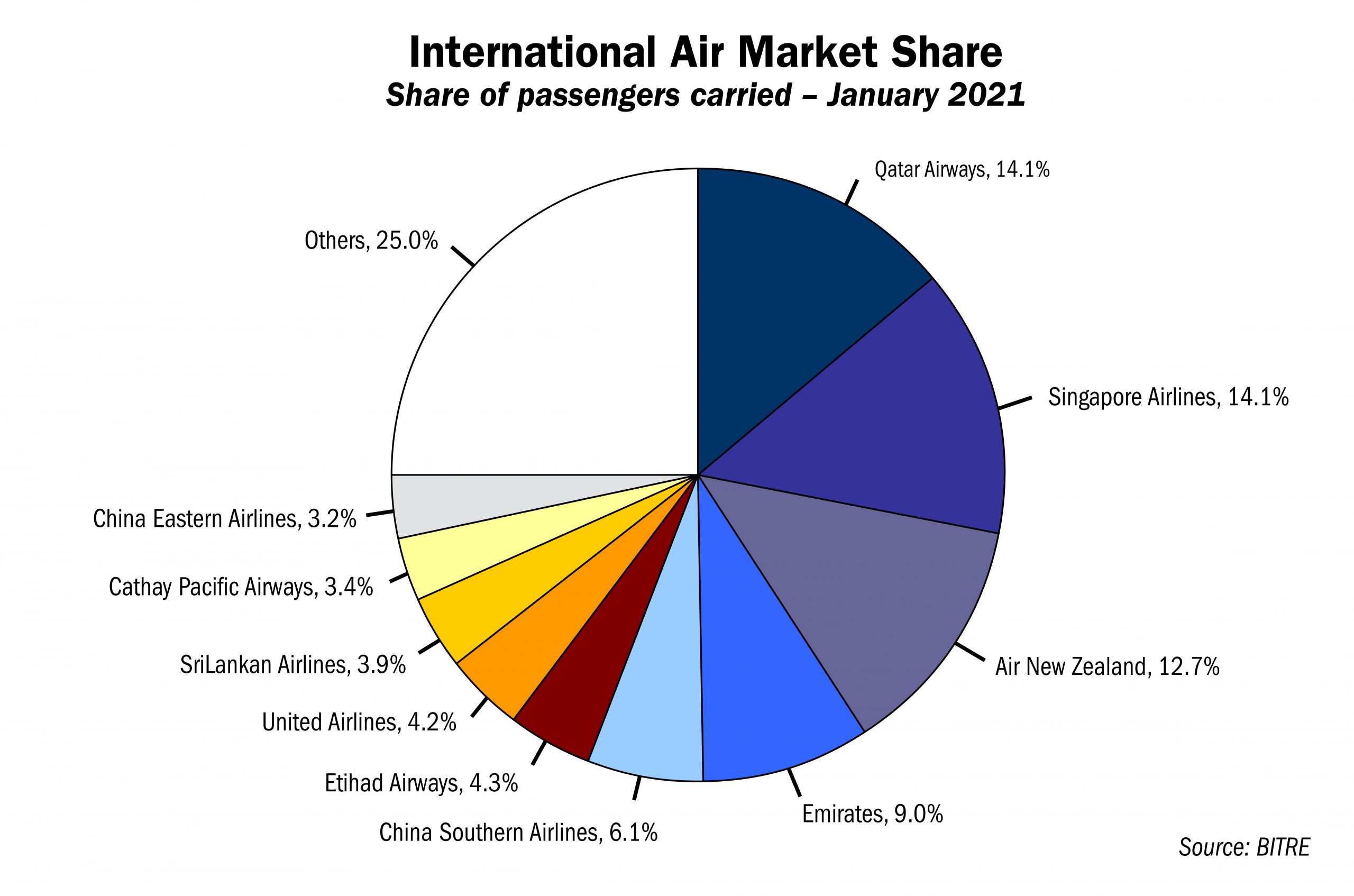 Since those early days of the crisis other airlines have also responded, with the most recent figures showing Qatar Airways still at the top with a 14.1% market share in January 2021, equal to that of Singapore Airlines. Air New Zealand was in third place with 12.7%, followed by Emirates at 9%, China Southern Airlines with 6.1%, Etihad Airways with 4.3% and then United Airlines at 4.2%. And while QR has been a front runner throughout the pandemic, all of these carriers are to be commended for continuing operations under the heavy constraints imposed by the Government’s flight caps.

Putting a cap on it

How on earth can an airline operate successful commercial flights when they are limited to just 35 paying passengers? The answer of course is that these services are marginally viable at best. The Board of Airline Representatives of Australia (BARA) last month released a report noting that “strong departure passenger and freight volumes have been critical to supporting the commercial viability of international flights”. Operating costs have spiralled, with no concessions provided on air navigation fees charged by Airservices Australia which are based on aircraft weight and distance travelled. State Governments have enforced quarantine for crew in hotels — of course charging the airlines for the privilege — and in some cases these pilots and flight attendants have been forced to subsist on the contents of vending machines because the official quarantine programs have not made allowances for these temporary residents.

“Airlines understand the importance of Australia’s system of hotel quarantine and infection controls in mitigating the risk of COVID-19,” BARA Executive Director Barry Abrams wrote. “Their implementation, however, at times leads to what can be best described as chaotic outcomes for airlines, passengers and staff involved in hotel quarantine…unfortunately the list of operational challenges experienced is not dissipating despite requirements being in place for many months”.

A particular issue for the airlines has been the seeming inability for Governments to give little if any notice of changes. Qatar Airways is not alone in experiencing these challenges, but it’s believed that one example saw a QR flight waiting on the tarmac to depart its originating airport while Prime Minister Scott Morrison delivered the outcome of a National Cabinet meeting. The crew on the plane needed to know whether they would be required to quarantine for 14 days upon arrival, meaning additional airline staff might have needed to be on board in order for the return flight to operate.

The recent snap lockdowns have also caused ongoing complexity and concerns — including the early February shutdown of the entire state of Victoria which saw Premier Daniel Andrews also summarily block permission for inbound passengers. Airlines still had outbound passengers and cargo to carry, meaning they were forced to operate empty aircraft into Melbourne for some weeks.

An untold story of this ongoing situation is also the simple fact that there are no limits on outbound passenger numbers. Australians need to get permission to leave the country, but this is commonly granted in the case of extended overseas stays or compassionate reasons, with 105,028 exemptions handed out to outbound travellers by the Federal Government between 25 March and 31 December 2020. While travellers must understand the difficulties of returning, in many cases eventually they will want to come back meaning the backlog of people trying to get onto inbound flights is ever-increasing under the current Government hotel quarantine cap policy.

The human cost – and the human benefits

Scruby’s team at Qatar Airways have experienced joy and sorrow throughout the pandemic. With massive demand for inbound seats, the carrier’s Australian flights are booked solid for months, albeit subject to the very limited number of passengers which can be carried on each service. So that means when faced with a pleading, desperate person in need, the staff are faced with the awful dilemma of “how can I accommodate this customer?” There is no latitude available from the Government, which appears to have abrogated responsibility for these tough choices to the airlines. But despite these challenges there have been some highlights — including the joyful, unexpected involvement of the Qatar Airways team with families and their children born to foreign surrogate mothers. Over the last year the QR team have flown more than 100 Australian families to meet newborns abroad and then returned them safely to Australia.

Scruby told travelBulletin of the fresh mindset within his organisation, which is 100% focused on supporting the travel trade and customers. “We get daily contact from embassies, Government agencies, random people on LinkedIn asking for help, and our attitude is always ‘how can we assist’,” he said. The carrier’s flexible refund and rebooking policies have been widely applauded, extending ticket validity for 760 days with simple procedures contrasted to the complex month-by-month changes introduced by some other airlines.

The Qatar Airways approach has certainly given it some bragging rights. In recent days the carrier noted OAG figures which confirmed it was now the largest airline in the world in terms of capacity. With its pedal firmly to the metal, QR continues to renew links across its global network, with a newly published Northern Summer schedule confirming more than 1,200 weekly flights to over 400 destinations across the globe. Travel is beginning to come back, and Australia and NZ are becoming significant outliers in terms of a slow recovery compared to the rest of the world where vaccine rollouts and government policies of suppression rather than elimination of COVID-19 are prompting more relaxed border policies. 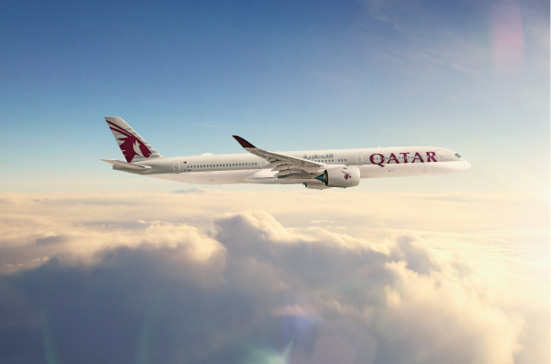 The permission for Qatar Airways to operate to Brisbane has also been a key achievement, and the carrier is proud of its persistence in repatriating Queenslanders when other carriers have pulled out of the market. Pre-pandemic any increase to the 21 weekly services to three Australian cities on Qatar Airways flights had been repeatedly knocked back, and the carrier clearly hopes a more pragmatic approach will apply going forward. For now, permission to continue QR Brisbane operations has been granted through until the end of October, and “we hope to continue that beyond then,” Scruby told travelBulletin.

Scruby is firmly convinced of the importance of aviation in the Australian recovery from COVID-19. So many sectors of the local economy rely on a robust flight sector — such as commerce, freight, the international student market and foreign labour. And that’s not to mention the massive pent-up demand from tourists. When the pandemic ends “the world is going to want to come here,” he said.

“We are standing by to make it happen”.