Home  >  Magazine  >  Wine would you travel anywhere else?

Wine would you travel anywhere else?

WITH a reputation for so many geographic tourism attractions, it is easy for some of Australia’s more consumable delights to get lost in the crowded marketing message. Adam Bishop discovers the variety of viticulture experiences our nation has to offer.

It can be argued that Australians are a spoilt people. When not taking leisurely swims at one of the country’s thousands of pristine golden beaches, we can be found trekking through a tropical or temperate rainforest (we have both after all), or for a drastic change of scene, cutting through the powder at one of Australia’s many ski resorts.

But this seemingly derisory characterisation is far from a slap down, rather by reading this story, we simply aim to give us Aussies a little bit more ammunition to brag about. For example, Australia is home to vast array of wine produce that is internationally recognised for its quality. So, it begs the question, wine would you travel anywhere else?

McLaren Vale: South Australia has earned itself a reputation as one of the country’s most renowned wine regions. There are many to choose from in the state, but for lovers of red wine, most notably shiraz, there is no reason to venture further than McLaren Vale. This region, located approximately 35km south of Adelaide, also excels in the production of premium grenache and cabernet varieties. Mediterranean grapes are grown in abundance here as well, such as the white fiano and vermentino, and the red tempranillo and sangiovese grapes. For those who enjoy combining their wine tasting with good quality produce, you’re in luck, because more than a third of McLaren Vale’s cellar doors offer local produce as part of the tasting experience, such as platters of meats and cheeses. Among the best known wineries and cellars doors in the region is Hither & Yon, which offers a wide variety of shiraz, grenache, cabernet sauvignon to choose from, as well as an environment to drink in front of a limestone fireplace while you nibble on some quality cheese platters. 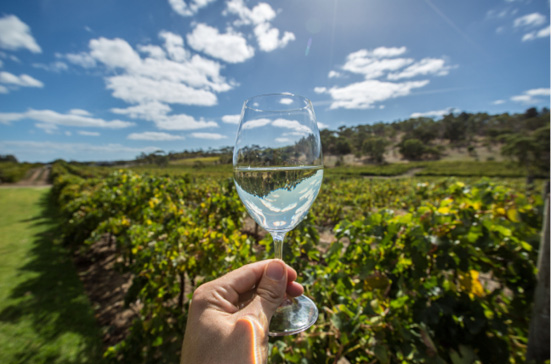 Margaret River: The wine industry in the Margaret River is considered to be the jewel in the tourism crown for the region, pulling more visitors to the area than any other attraction. The most popular wines here are generally cabernet sauvignon, chardonnay and semillon/sauvignon blanc blends, with Margaret River very much promoting the combined dining experiences available. There is an abundance of restaurants that offer wine and food packaged menus, with producers such as Cullen Wines, Leeuwin Estate and Xanadu Wines all offering tastings, function space and eateries all in one location. Foods the region is famous for include locally grown olives, venison, award-winning cheeses, chocolate, organic fruit and vegetables, plus the area has a strong reputation for fish which is caught in abundance off its local shores.

The Hunter Valley: The four varieties the Hunter Valley region is famous for are shiraz, semillon, chardonnay and verdelho. However, the flagship wine, and definitely the most touted amongst locals, is the Semillon — a golden-skinned grape used to make dry and sweet white wines. Outside of France, the Hunter Valley is the grape’s spiritual home. The semillon thrives in the Hunter’s dried up and sandy riverbeds and often boasts lemon and lime flavours, rich with citrusy crispness and a natural, lively acid. For wine drinkers who don’t go in much for the dryer flavours, the Hunter is currently in a growth phase of wineries producing much sweeter varieties. If you want to heighten the deliciousness of semillon wines, make sure to consume with seafood, ideally white-fleshed fish, prawns, crab, and lobster. The Hunter also offers up a good stock of the white Verdelho grape variety, considered to be a brilliant starting wine for the occasional drinker. Flavours of this grape are generally described as bring bold and lively — a bit like a fruit salad in a glass. Yum! 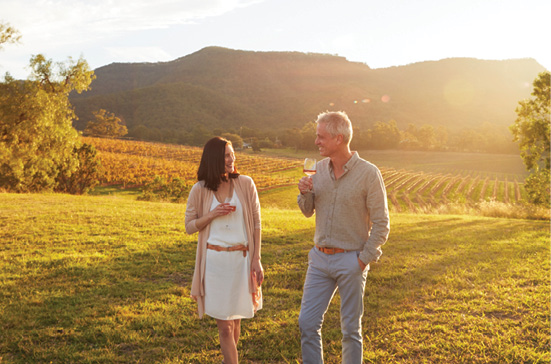 Goulburn Valley: This area stretches from Seymour in central Victoria right up to Echuca on the Murray River, and is peppered with numerous regions spread over a vast area. Interestingly, the Goulburn Valley region is also home to the oldest wineries planted in Australia, with the first vineyards established here in 1860 by the Tahbilk Winery. One major drawcard for people heading to Victoria for their wine hit is the ubiquity of the marsanne grape, a rare commodity in the world, especially outside of the Rhone region in southern France where it is most commonly found. Other wine varieties grown in the Goulburn Valley include chardonnay, cabernet sauvignon, riesling and shiraz. For festivalgoers, the area features an annual food and wine festival called Tastes of the Goulburn. The event grows larger every year and most recently hosted more than 50 vendors, with winemakers, brewers, restaurateurs, producers, distillers, growers, and chefs all lining the street to seek your culinary approval. It takes place in October each year. 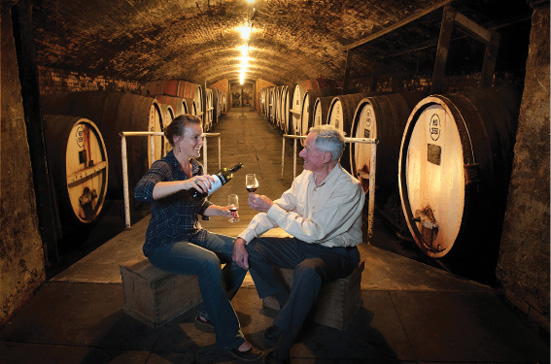 The Tamar Valley: Located along the valley north of Launceston, the Tamar Valley is most famous for its elegant and pristine wines across varieties such as chardonnay, riesling, sauvignon blanc, pinot gris and pinot noir. Perhaps controversially, Tasmania’s wine industry has benefited from the planet warming through climate change, with warmer conditions producing a number of positive effects for growers, including grapes that ripen fully and allow for a much more vibrant tasting wine. While other vineyards in Australia like the Hunter Valley and Margaret River have to contend with prospect of more sunburnt grapes, climate scientists predict Tasmania will become an even bigger haven for wine growers in the coming years based on rising temperatures. For those interested in going on a wine tour, the most popular brands in the Tamar Valley include the Bay of Fires Wines, Iron Pot Bay Vineyard, and Tamar Ridge.