QUEBEC City is not often first thought of when skiing in North America comes to mind.

However, after often taking a back seat to Rocky Mountains and other Continental destinations, the Quebecois capital is increasingly being sought out by travellers who are seeking first-class skiing close to the city, with its UNESCO World Heritage historic district.

Offering a generous 71 runs on three faces, Mont-Sainte-Anne’s offerings are suited to all abilities, and offers fantastic vistas of St. Lawrence River, Ile d’Orleans, and Quebec City itself. The longest run, Chemin du Roy, stretches “oot” over 5km, and is commonly adorned with family skiers out for a leisurely cruise. 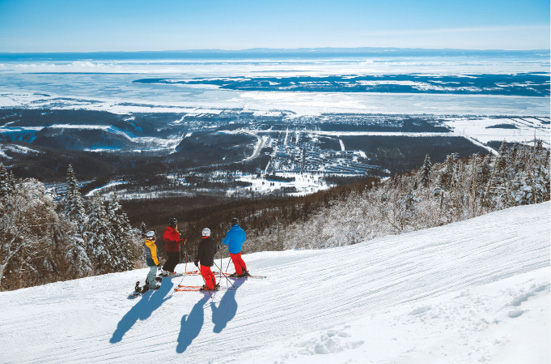 Another ski resort, Le Massif de Charlevoix, is home to a drop of 770m and is the largest east of the Canadian Rockies. The St. Lawrence River waits for you at the foot of the mountains and the hill’s 52 runs feature plenty of opportunity for glade skiing.

These two spots are under an hour from Quebec City, but Stoneham’s location just 20 minutes away is one of many factors contributing to its popularity. The resort features 43 runs spread across three mountains, 19 of which are lit at night. With some of the best dining, apres-skiing and a generally festive atmosphere, it’s a must-see.