The wild gauchos of Argentina

Ben Groundwater discovers that one of the best ways to explore South America is actually on horseback.

The gauchos aren’t happy, apparently. These steely men of the land with their dusty, tattered berets and their thousand-yard stares; these cowboys of Latin America, the herders of cattle and the keepers of land — they’ve found something that doesn’t quite meet with their approval.

“They’re getting used to it,” Kevin Begg laughs as our horses crest a ridge in the high sierras and the scent of singeing meat that I’ve had in my nostrils for what seems like hours now suddenly has a source, as the sight of the Los Potreros homestead opens up below us and the parrilla, or barbecue, that is being prepared in the yard out the front comes into view.

I know what’s on that parrilla: the standard Argentinian barbecue favourites, the chorizo and morcilla sausages, the short-ribs, the sirloin steaks, the capsicums and other vegetables. I know who’s working the grill too, and I know that that’s the gauchos’ problem.

They’re women. Two of the cooks who work in the Los Potreros kitchen have become the estate’s “asadores”, the barbecue chefs, the most important cooks of this most important of meals, and the local gauchos have been having a hard time getting used to women doing what they consider to be a man’s job. 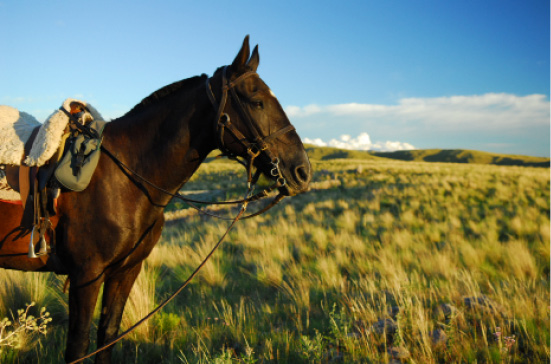 But, as Kevin, the owner of Los Potreros says, they’re getting there. They’re being dragged reluctantly into the 21st century.

And anyway, the gauchos should be off doing what gauchos do best, instead of worrying about the steaks. They should be sharing their lifestyle with visitors to this “estancia”, a traditional farm outside the central Argentinian city of Cordoba.

They should be leading groups of amateur horsemen (and women) through the golden grasses of Los Potreros, showing them the ropes, teaching them the skills — as they have done during my stay on the estancia, where I’ve slowly found my feet as a trainee gaucho.

It all began with the purchase of the requisite headgear: a beret, the hat that’s a hangover from the wave of migration from the Basque lands of Spain and France into Argentina in the late 19th century, and a natty quirk for these hard men of the southern land. I’ve also taken on the Argentinian riding style, holding the reins in one hand, guiding my horse gently with a flick of the wrist and a squeeze of the heels. 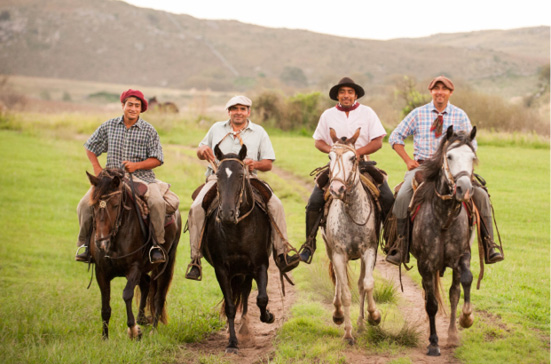 It doesn’t take long out here before you’re indulging in the gaucho fantasy. Los Potreros is a working cattle and sheep farm, and the cowboys who aren’t leading groups of visitors are usually out tending to those animals, keeping watch over the flock, fixing fences and guarding against intruders.

Those visitors come to the estancia not just to learn to ride, and occasionally to play polo, but to fantasise about gaucho life, to pretend to understand this noble, solitary and iconic profession.

And so, we ride. We ride with Kevin, but also with Pablo, a local gaucho bedecked in beret and neckerchief. We explore the rolling, grass-covered hills of the Los Potreros homestead, flanked by three of the farm’s dogs, indefatigable animals that duck and dart through the long grass around us for hours on end. We begin on the first day with a gentle walk, to get used to the horses, and to allow them to get used to us. Pablo seems at ease here, smiling encouragement every now and then, rolling his hips in the saddle, taking in the scenery. We cross streams and we climb hills. We walk among cattle who barely give us a glance. We retire to the homestead at night for a roast and red wine.

On day two, however, things begin to pick up. We trot through the long grass of the sierras. We canter. And once, in a wide-open space with nothing around to trample, we gallop, a thrill that’s almost impossible to describe, an experience of power and speed that only lasts a few seconds, and yet to me feels like it stretches into hours.

And then, finally, we have the true gaucho experience, the one I’ve been sniffing on the cool mountain air for hours: the parrilla. This is how Argentinian cowboys eat, with big slabs of meat cooked over hot coals, food that is basic but delicious, convenient but traditional. 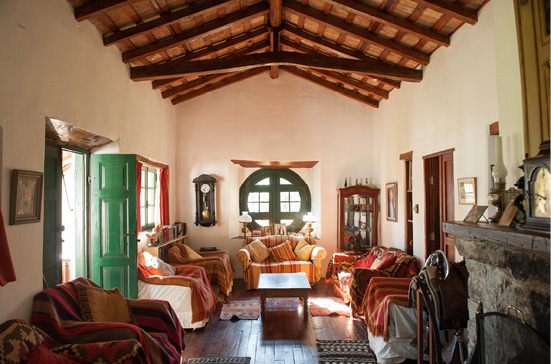 And, of course, it’s usually cooked by one of the gauchos themselves. The men who care for the animals while they’re alive are apparently also in charge of them as they make their way to their final destination.

Except, not at Los Potreros. Here, women are the asadores and even the most traditional of the gauchos has had to admit that they do an excellent job of it. And as we sit down at an outdoor table and rest saddle-weary limbs, as we take off our now dusty berets and sip wine and eat chorizo and morcilla and get ready as the huge slabs of steak are brought over to the table, charred to perfection, I’m inclined to agree.