The best of South Africa

With a nation as varied as South Africa, Craig Tansley unpacks the best way to experience it all in the ultimate 14-day itinerary.

National parks full of wild animals, thousands of kilometres of empty beaches and bays fringed by coastal mountains; next add in some of the most cosmopolitan and bustling cities on Earth and you’ll see why South Africa is considered one of the most diverse travel destinations in the world. Here’s your guide to making the most of it.

Leap right into the African wilderness — you’ll arrive in Johannesburg, then take a short flight to Kruger National Park (fly to Nelspruit). No wildlife park in Africa has quite the density and diversity of animals as Kruger: you’ll see the Big Five (lions, elephants, leopards, buffalo and rhino), plus 137 other mammals and over 500 species of birds, spread across rugged bushland under the Lebombo Mountains. There’s 20,000km2 of wilderness here, home to all types of safari camps — from basic tented affairs to Africa’s fanciest safari lodges. There’s also archaeological sites tracing mankind back to the Stone Age. You can take safari drives and game walking expeditions across trails which criss-cross the wilderness. Though if you’re looking for a more intimate experience, consider a private game sanctuary close by, such as Camp Jabulani, which is just 70km away (fly to Hoedspruit). There you’re one of 12 guests on a 13,000 hectare private reserve with its own Wildlife Conservation Centre, and you’ll sleep amongst orphaned elephants.

Fly direct from Nelspruit. Cape Town is one of the world’s great cities — home to South Africa’s best bars, hotels, restaurants and cafes; all set around a spectacularly rugged coastline (whose every beach is lined with surfers riding waves) and the world-renowned Table Mountain — a flat-topped peak which dwarfs the city. Watch seals swim from your harbour-side hotel, then ‘do’ lunch at a chic beach club in the city’s well-heeled western suburbs. There’s much to do in the city itself, but any visit to Cape Town must include short drives out of the city to its surrounding attractions. Cape Town sits on a 300km stretch of coast called the Garden Route (it’s a UNESCO Biosphere Reserve), follow it 50km south to the Cape Of Good Hope, to hike to deserted beaches amongst baboons and elands. Lunch where the Indian Ocean meets the Atlantic just below your table on the balcony at Two Oceans Restaurant. 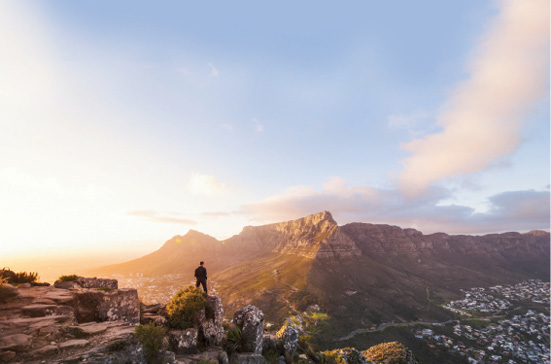 Then drive 50km east of Cape Town to South Africa’s best known wine region, Stellenbosch. Known as the country’s Gourmet Capital, this is where you’ll find the country’s best regional restaurants, as well as over 150 wineries. Cycle or walk around its oak-lined streets full of Cape Dutch, Victorian and Georgian architecture. There’s also plenty of boutiques and art galleries. 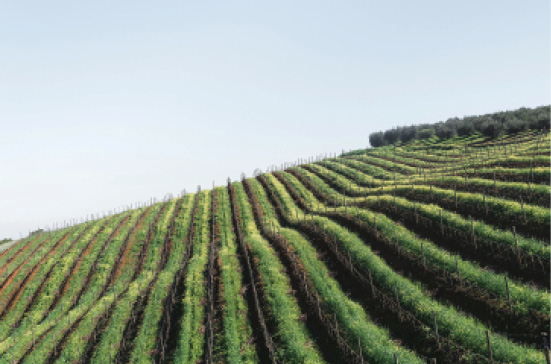 Don’t forget the Eastern Cape. Too many do, and it’s their loss. You’ll find one of South Africa’s most picturesque — and least visited areas — here east of Cape Town. Fly to East London or Port Elizabeth and drive across 800km of pristine coastline full of deserted beaches, home to some of the world’s best surfing (like Jeffrey’s Bay, which holds a World Surf League event each July). It’s incredibly diverse along the Eastern Cape — there’s everything here from lush rainforest to arid karoo (semi desert); and from South Africa’s only ski resort (Tiffindell) to private game reserves with the Big Five on display (and fewer tourists to see them).

In the years following the end of apartheid, Johannesburg became infamous as one of the most dangerous cities on Earth. While you still mightn’t like to visit its darkest corners solo at night, it’s worth at least two days there on your way to Durban. GQ magazine calls it the “cool capital of the southern hemisphere”, and it’s easy to see why. Districts like Maboneng and Braamfontein are considered amongst the most successful urban-renewal projects on Earth — hipsters hang out now where the muggers once ruled; every building is adorned with street art, every block has a craft market and live music, and the streets are full of chic cafes and art galleries. It’s also worth checking out the city’s museums, especially the Apartheid Museum, and the heart of the anti-apartheid movement in Soweto. 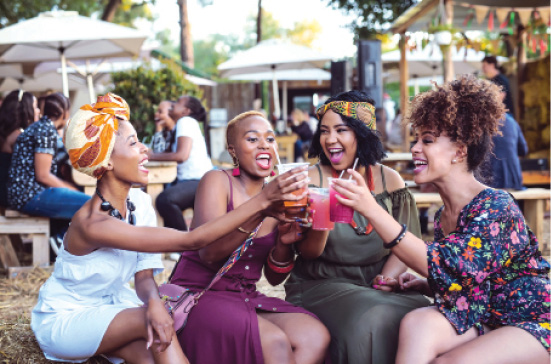 Fly an hour south to Durban, another of South Africa’s most transformed cities. Also infamous for its crime and urban decay, Durban is now a bustling metropolis — but one which sits astride a long stretch of coast where surfers ride waves and there’s a promenade full of cyclists and joggers. Much of this makeover can be dated back to the 2010 World Cup, but while its waterfront is now full of trendy bars and cafes, the inner city is still made up of Africa’s most Asian marketplaces. The city’s home to the largest concentration of people of Indian descent than anywhere outside of India, and inner Durban feels more like Mumbai than Africa. Stroll its bazaar-like markets, where you’ll find witch doctors (Muthi Market), or feel the pulse of the teeming Victoria Street Markets while eating Durban’s most famous export, bunny chow (hollowed out bread rolls filled with curry). Then leg it to a suave hotel bar in time for sunset across the ocean. 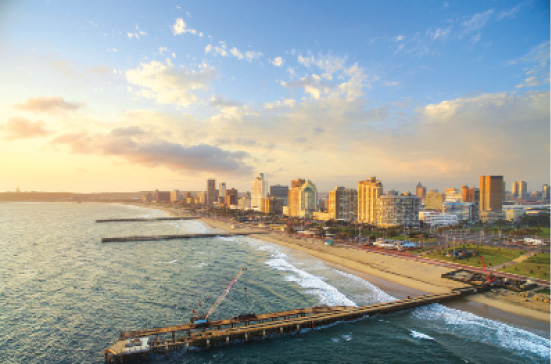