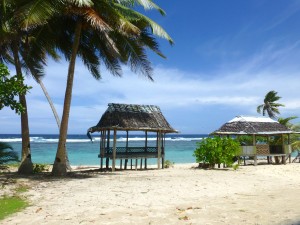 It’s FOUR in the morning and the Samoan sky is covered with an overturned salt shaker of stars. A warm, frangipani-scented breeze wafts through the open taxi window. My husband and I are finding it nearly impossible to keep our eyes open as we’re driven the 90 minutes from Faleolo Airport in Upolu, one of Samoa’s two main islands, to our resort. And yet our driver is bright, almost impossibly cheery, and full of highly useful information that we’ll no doubt forget in our sleep-addled state.

He points to one of the open-walled structures we’ve been passing. “See those? They’re houses, or fales as we call them. In Samoa, we don’t need walls. There’s hardly any theft here, and if someone does take something they will be shunned by the whole village.”

Both this information and the affable manner of our driver are, we soon discover, perfect examples of Fa’a Samoa, or the Samoan Way. This 3000 year-old living culture puts family before all else and celebrates traditional values and cultural practices and customs. It can be felt acutely in the warm hospitality of the Samoan people, which follows us every step of the way as we explore the waterfalls, trenches, blowholes, secluded beaches and cultural sites of this natural nirvana.

Our time on this Polynesian paradise revolves around aquatic adventures, which begin with a swim, snorkel and glass-bottomed kayak around the private lagoon in front of our resort, Seabreeze.

The following afternoon we take the 20-minute hike to Vavau Beach, a palm-fringed, Grecian-clear lagoon surrounded by rainforest, which we have completely to ourselves. The famous To Sua trench, a gigantic lush green tidal hole that formed when the roof of a lava tube collapsed, is just 10 minutes walk away in Lotofaga village. We descend the near-vertical 30-metre ladder into waters so warm, clear and sparkly that we don’t manage to pull ourselves out until our fingers are puckered like prunes.

By day three, ‘Samoa time’ has us firmly in its clutches and we roll sedately between magical experiences. There’s a visit to the Piula cave pool, a freshwater swimming hole that reaches into a series of caves, and to the Pupu Pu’e National Park’s coastal walk that emerges at a lava field pockmarked by blowholes. There’s a night spent in a treehouse resort named Lupe Sina in Upolu’s hinterland, where we sleep in a 300-year-old banyan tree. There are visits to the 100-metre Papapapaitai Falls, and to Lalomanu Beach on the south coast, which is surrounded by craggy green volcanic peaks and candy-coloured beach huts. All unimaginably beautiful experiences that we hardly have to share with a soul.

TO CHURCH WE GO

What we do have to share with many souls is the local church, which we venture to early the next day. Sundays are dedicated to worship and spending time with family in Samoa, so we wrap ourselves in white lavalava sarongs and shuffle into church alongside dozens of white-clad locals.

Listening to the locals sing a string of gospel hymns in their deep, resonant voices is a transcendent experience, and one that helps us understand what a huge part Christianity has played in Samoan culture ever since the western missionaries arrived in 1830. Today, the motto on Samoa’s crest reads Fa’avae I Le Atua Samoa, ‘Samoa is founded on God’, and there are churches like the one we’re in in every village we pass.

When the service is over we stroll slowly back to our resort, moving through clouds of smoke-infused air emanating from the umus (earth ovens) that are traditionally enjoyed on Sunday afternoons.

At Samoa Tourism Authority’s Cultural Village, set in the heart of Upolu’s capital Apia, we learn about a slightly less righteous Samoan tradition. Here, in amongst demonstrations of woodcarving, palm weaving and umu making, we witness a live, wince-inducing tattooing session.

Tattoo, our guide tells us, is a traditional and sacred Samoan art form that’s seen as a rite of passage for men entering into adulthood. Men often cover their entire bodies in intricate ink patterns, created by master tattooists with traditional handmade bone, tusk, shark tooth or wood tools, as a mark of personal and spiritual maturity, and a lifetime commitment to Fa’a Samoa.

“It’s the ultimate mental and physical challenge, to prove your character and your bravery,” says our guide, adding that the process can take up to two weeks  and that an unfinished tatau (as  tattoos are called locally) is a sign  of weakness that will bring shame  to the participant’s family.

“When you come out of it alive, which not everyone does, it makes you appreciate everything. And no matter how hard a job you’re given, you do it with a smile.”

We’re certainly smiling that afternoon as we explore Apia’s busy handicrafts market, and the enchanting mansion of Treasure Island author Robert Louis Stevenson in Vailima, where he spent his last five years in the 1890s. Our guide offers to walk us to the top of Mount Vaea behind the mansion to see the author’s tomb, but after all our adventuring we’re looking forward to simply lazing on the beach. He accepts our decline with grace and a hearty chuckle. Which is, of course, the Fa’a Samoa.