Take me out to the ball game

BEN Groundwater discovers why baseball is one of America’s favourite pastimes.

There are grandstands set up on people’s roofs. Actual grandstands. We’re not talking about a few deckchairs laid out on a someone’s patio to catch sight of the big game. We’re talking entire banks of seats, row upon row of chairs ascending in height, for which tickets are sold and drinks and snacks are provided: on someone’s roof!

That’s one of the first things you notice when you take your seat in the historic grandstand at Wrigley Field in Chicago, one of the oldest and most charming baseball stadiums in the USA, if not the world. Out there in the distance, across the heads of the spectators, across the wide expanse of perfectly mowed grass and over the famous, ivy-covered back wall, there’s grandstand seating set up on top of the apartment blocks next to the field. 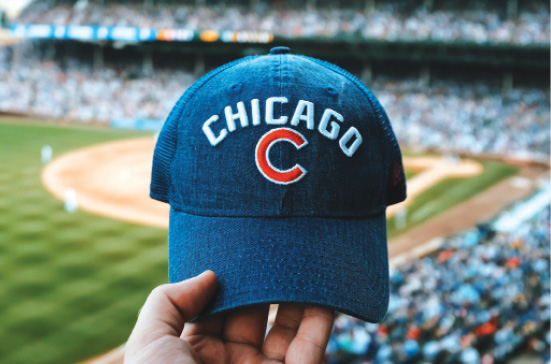 From there you can see the game perfectly. No wonder enterprising citizens have set up places to watch. That they can and that they do tells you everything you need to know about the historic home ground of the Chicago Cubs baseball team. Wrigley Field isn’t located far out of town, surrounded by car parks or an industrial estate. It exists right in the middle of Chicago, encircled by apartment blocks, by shops and bars and restaurants. By normal communities. It’s also small enough that from some of those blocks you can see down onto the field, to watch the game whenever the city’s favourite sons take to the turf.

This is one of the finest places in the world to witness a sporting event, and in the US there are many fine places to witness sporting events. This is a country obsessed with the big game, a nation that takes baseball and basketball, NFL and ice hockey so seriously as to make an entire day out of their playing.

In some cities that big game means “tail-gating”, hanging out in the stadium parking lot hours before the match begins to drink beer and barbecue meat and catch up with friends. In other cities it means hanging out at local bars and restaurants before getting in your car or on public transport and making your way out to the stadium. 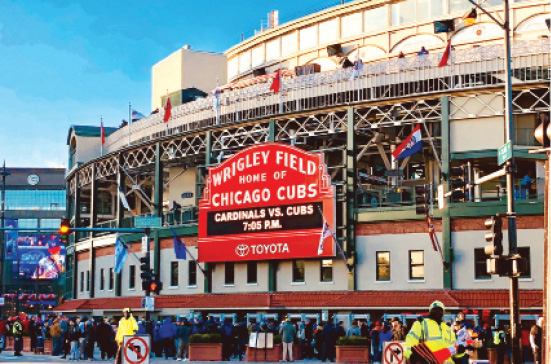 In Chicago, meanwhile, a Cubs game means heading to Wrigleyville — the suburb that encircles the famous field — and getting into the team spirit. Some of the bars around here even have batting cages, which means you can drink a beer and swing a bat and attempt to club a few home-runs before seeing the real deal. Every place is filled with baseball fans, Cubs caps on, ready to roll.

But let’s get back to that stadium. There’s been major-league baseball played here since 1915, when Weeghman Park played host to the Chicago Whales. By 1927 the field had become Wrigley (named in honour of the owner and chewing-gum maker) and the team the Cubs, and the rest, as they say, is history.

You can feel that history in the old wooden grandstand that seems to creak and groan under the weight of today’s occupants. You can see it in the old hand-turned scoreboard. You can become part of it in the observance of cherished rituals, singing along with the traditional “Take Me Out to the Ball Game”, getting up to stretch in the middle of the seventh inning or listening to the live organ music. 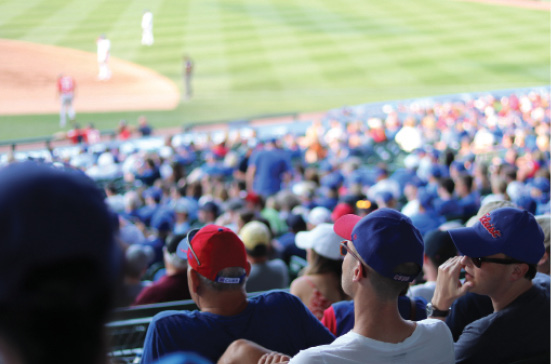 Or you can just watch the game. Today under brilliant sunlight the Cubs are playing the St Louis Cardinals, something of a local derby considering the teams are separated by just four hours of highway. The fans around me are as friendly as their reputation, making jokes as they pass money down towards the aisles and gratefully receive the big cups of beer that make their way back in return.

There’s a gentle rhythm to baseball that takes a while to appreciate. It’s like cricket: not much happens, and that’s the glory of it. You don’t have to concentrate all the time. You switch on and off from the game, swinging your attention to the people around you, to the view of Chicago, to those people atop the apartment buildings “beyond the ivy”.

Baseball is as jargon-filled as cricket, too, with fly balls and base-hits and RBIs, double-plays and pinch-hitters and pitch-outs. With what? Fortunately at Wrigley you find yourself perched amid a crowd of experts only too happy to pass on their knowledge over cold beer.

Every now and then something happens to break the conversation — there’s a base hit, a fly ball, even a home-run — and you clap, you cheer, then retake your place in the Friendly Confines. There’s no better place to be.