Spice, technology, and Korean BBQ all come to mind when thinking of South Korea and although travellers will find an abundance of those elements, the nation also has much more to offer in terms adventure, experience, taste and history writes Anastasia Prikhodko.

Standing at the gates of Gyeongbokgung Palace, the largest of the all five remaining Korean palaces, there is much to feel in awe of. The palace, built in 1395, was excessively damaged in the early 20th century by Imperial Japan, and since then the walled complex has gradually been restored. Today, the palace also houses the National Palace Museum of Korea and the National Folk Museum.

Down small alleyways lined with benches overflowing with foreign herbs, spices and fruits, along with clothes, furniture and fresh fish, travellers will find Namdaemun Market, the oldest and largest in Korea. The market gets its name from its location next to the namdeamun, the main southern gate to the old city. Filled with about 10,000 stores, Namdaemun Market is also the place to try traditional local foods at Eunho Restaurant and Jinjujip, whose specialty is oxtail soup. There are also themed alleyways, including the Stewed Belt Fish Alley, Noodle Soup Alley, the street vendor known for vegetable-filled griddle cakes, and Buwon Myeonok woi which sells in North Korean-style cold buckwheat noodles. 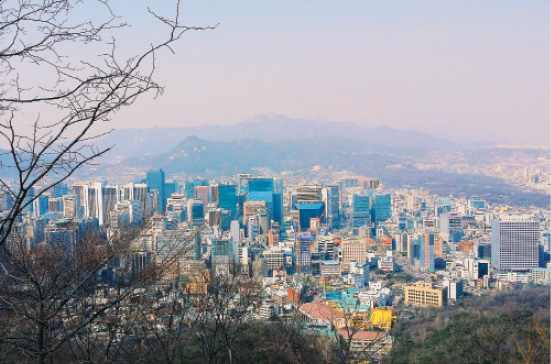 For travellers seeking a thrill or are travelling with kids, Lotte World is the place to visit. The recreational complex is comprised of an indoor theme park, an ice-skating rink and an outdoor amusement park called Magic Island. The artificial island is home to shopping malls, a luxury hotel, a Korean folk museum, sports facilities, and movie theatres.

An hour’s flight away from Seoul is Busan, an eclectic destination offering travellers the chance to hike, visit Buddhist temples, soak in hot springs and of course, feast at the country’s largest fish market. Busan’s foodie scene has slowly but surely been gaining popularity for its local offerings including Eomuk — fishcakes threaded through wooden skewers dipped in pots of hot broth and ssiat hotteok, a glutinous rice flour dough stuffed with a sugar and cinnamon mixture before being shallow fried in a pan of butter or oil.

Busan is often called the “summer capital of Korea” because of its five beaches: Haeundae, Gwangalli, Dadaepo, Songjeong and Songdo Beach. Additionally, to the west is Geumjeongsan, a popular hiking for locals and nearby is Beomeosa, the city’s main Korean Buddhist temple. Apart from the beaches, for those who prefer the comfort of hot springs, Busan has 450 of them scattered throughout the city. Spa Land Centum City is the most famous, with over 20 spas fed by all-natural spring water. One of the oldest spas is in the Dongnae district and features over 40 different baths to choose from including the Outdoor Bath, or the Longevity Bath.

The Gamcheon Culture Village, a kaleidoscopically coloured town is another popular attraction and after its 2009 revitalisation, the former slum houses murals, sculptures and other artworks. 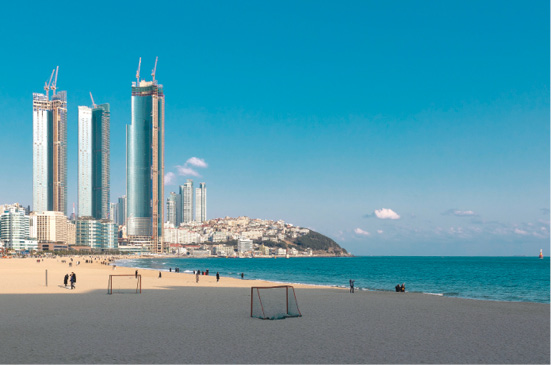 Only an hour or so flight from Busan and Seoul is Jeju, located just off the coast of South Korea. The island is a magnet for travellers seeking adventure, a dose of nature and attractions with a touch of uniqueness.

The destination is home to the highest mountain in South Korea, Hallasan, which stands at 1,950m above sea level, and is a popular hiking spot for visitors. Another famous spot is Manjang Cave. Formed by cooling lava, the cave’s dark, cold, often narrow and slippery with water, and you know there are bats up in its murky corners: not somewhere for the claustrophobic.

For sunrise seekers, Seongsan Ilchulbong also called “Sunrise Peak”, is a special place worth waking up at the crack of dawn for. The 182m above sea level mountain overlooks the ocean and is one of the best places on Jeju Island to watch the sunrise.

The journey there and back takes about an hour and has steps along the way to make the climb easier. Travellers can also take a seat at the side of the crater to spot any “Haenyeo”, the famous female abalone divers of Jeju Island, practising their traditional art. Often the divers hold their breath for nearly two minutes while searching beneath the water for the shellfish, which is main ingredient in the island’s speciality, abalone porridge. 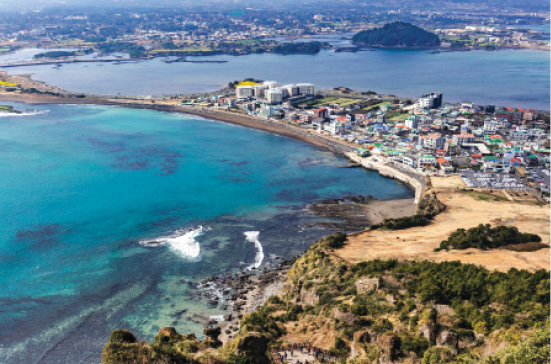