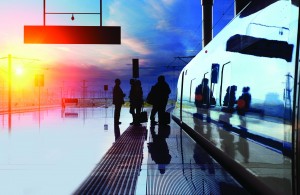 The Eurail Pass hardly needs an introduction, having earned a reputation as the leader in European rail travel. Having sold Europe to clients for well over a decade, the words Eurail Pass have crossed my lips countless times. But a recent trip to Europe allowed me to experience the rail network first hand.

Purchasing a 15-day flexi pass allowed me to travel within 24 countries, all embracing their own culture, cuisine and language. While cars are often the norm in Australia, trains are the main state of play in Europe as it’s fast, efficient and cost effective. And when you consider the logistics of air travel, it’s easy to see why.

For instance, take into account travel time to the airport plus a minimum 2-3 hour check-in, in addition to security processes and drudgery — none of which is seemingly evident with train travel.

And then there are restrictive airline luggage allowances which constantly come under scrutiny, and the stress of wondering if your baggage will arrive in one piece. Add to that the arduous task of hailing a taxi and finding your hotel, which is often situated within walking distance from a major train station.

While clients travelling by train are not locked into itineraries before leaving Australia, it is preferable to reserve seats ahead of time to lock in travel plans.

Some trains may not require compulsory reservations, but it is best to book, particularly during peak times such as the European summer to avoid last minute seat changes, and to ensure a happy repeat client.

Determining whether seats are reserved once onboard varies between train coaches, but generally the seat numbers will be lit up for pre-booked journeys. Booking early will not only lock in travel plans, but it will also secure a seat for the whole duration of the trip – even before leaving Australia. Rail Plus handles all of these requests provided that it is within the advance purchase period, as pass holder seats are limited.
Seat reservations can be made at most train stations, even for ongoing journeys, but travellers cannot be guaranteed forward-facing seats, as trains habitually arrive at a station in one direction and depart in another.

Seat reservations are compulsory for all high speed trains, particularly the TGV in France and City Night Line trains (CNL) in Germany where cabins can only be booked if holding a First Class pass.

Travelling overnight comes with the bonus of saving a night’s accommodation and if the journey commences after 7pm, travellers can mark their pass with the following day’s date for further travel. The ‘S Bahn’ in Germany is also included in the city’s network, provided that the date is marked on the pass.

A word of warning to your clients – my conductor on the CNL mentioned that the train is commonly divvied up during the night at major transit points, so passengers are advised to store their baggage in the correct compartment rather than moving to more comfortable areas, only to find themselves without baggage in the morning. Also, before boarding a train with your pass, ensure your clients fill in the date of travel because they will lose a day of travel if they change their mind. In terms of cost, it’s also worth noting that ticket prices increase in line with major events due to supply and demand.

Rail journeys are generally faster running north to south (and vice versa) compared east to west. Take the countryside of Spain and Switzerland for instance, where trips can be much slower due to the mountainous terrain. However, the twisting and turning is purposely unhurried and the scenery can be simply breathtaking.

My own journey commenced in Bergen, but as my flexi pass was not yet valid, I purchased a one-way ticket to Oslo. As an example of cost, a Second Class ticket in October was A$159, highlighting that the First Class Eurail pass is excellent value in terms of price, flexibility and comfort.

Whilst in Berlin, I prepared for the Santa Claus experience in Lapland and opted to take the scenic excursion by fast train and ferry. Travel on the ferry was included from Puttgarden to Malmo, and onwards travel towards Stockholm was a delight as the countryside was powdered with perfect white snow. Upon arrival I caught the Viking Line ferry across to Helsinki, and although not included in the Eurail pass, Viking Lines offers a 50% discount for Eurail pass holders.

The Santa Claus Express offered a modern and clean service, operating a return daily service between Helsinki and Rovaniemi with two overnight services. First Class Eurail pass holders pay only EU$188 return. I did meet Santa onboard and he sent his greetings to everyone Down Under, as he knew it had been quite hot and I would be returning soon.

Just like Santa, there is an enchantment about rail travel which evokes a feeling of childlike wonder, and waiting for the sound of the shrilling whistle and a mighty ‘toot’ from the driver has its own thrill.

To read more about her travels, visit her blog www.travelgracefully.com.au.