QE2 reborn as hotel in Dubai

Cunard’s former Queen Elizabeth 2 has relaunched as a floating hotel in Dubai, more than 10 years after it was purchased by local investment company Istithmar World.

Originally inaugurated in 1967, the iconic 13-deck ship was sold to the Dubai government in 2007 and departed on her swansong cruise from the UK to Dubai in November 2008. 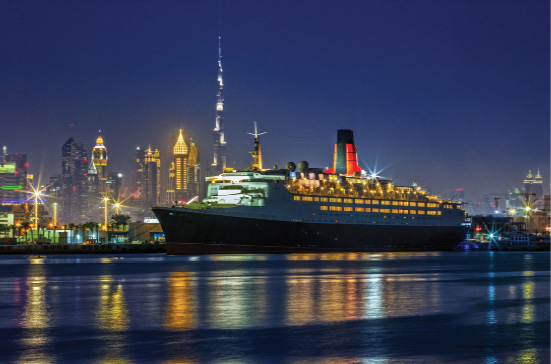 Queen Elizabeth 2 has since been converted into a maritime museum and hotel, while holding onto “the authentic elegance of her former years”.

QE2 features 224 refurbished rooms and suites ranging from Standard, Superior and Deluxe Rooms (offering either Arabian Gulf or Dubai skyline vistas, some from the original portholes) through to the Captain’s Club Room with Balcony. The ship has more than a dozen food and beverage venues and 25 meeting and conferencing facilities. Queen Elizabeth 2 also contains a shopping centre and theatre.

“Docked permanently at Dubai’s Mina Rashid, she has been lovingly restored to her former glory — revitalised with all the latest in smart technology,” the www.qe2.com website boasts.