ONE of the most popular tourist destinations in Hawaii, the USS Arizona Memorial, located at the Pearl Harbor National Memorial, recently re-opened in September last year after four months of closure due to repairs. Located in Honolulu on Oahu, the site is the resting place of the more than 2,000 people killed during a Japanese attack on the morning of 7 December 1941, with next year marking the strike’s 80th anniversary. 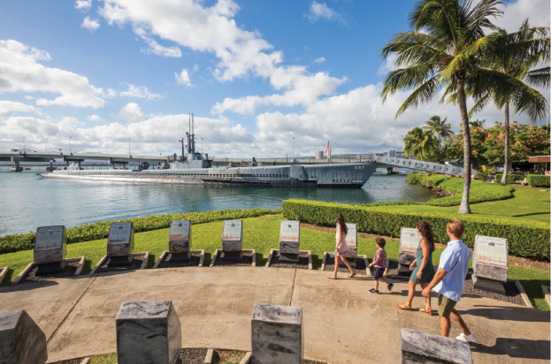 Located on the southern end of the island, the Memorial and museums are free to visit, however there are several paid options available to make the most of a visit. A narrated headset tour is available at US$7.50, while two more premium options, the Deluxe Tour and the Passport Package cost US$12.50 and US$72 respectively. The Deluxe Tour incorporates smart phone access with videos and narration at each tour stop, and allows you access to the Virtual Reality Center, while the Passport Package offers access to the supplementary sites not included in the national park, such as the USS Bowfin Submarine Museum and Park, and the Pearl Harbor Aviation Museum and USS Missouri tour.

The National Park’s centrepiece is the USS Arizona Memorial, commemorated by an offshore shrine. There are two boats which take visitors to the Memorial, and visitors must secure a free ticket. Departing every 15 minutes from 7am until 3pm, the program is 75 minutes long, beginning in the onshore theatre with a 25-minute documentary, and continuing with the boat ride to and from the Memorial. Tickets are available online up to 60 days prior to visiting and are also available on the day until exhausted.