CRUISING the Galapagos Islands on an expedition ship takes you places no land tour can go. Amanda Woods sets sail on a journey to remember.

As the wave hits the blowhole, there’s a boom as the sea spray rises into the air. A light breeze carries the mist ashore but rather than coming towards us it creates a soft focus backdrop, making the brilliant blue feet on a dark rock look all the more spectacular.

While the rest of the bird is a fairly ordinary brown and white, there’s no mistaking a blue-footed booby. With around half of the world’s breeding pairs here in the Galapagos Islands it’s one of the best places to watch them do their mating dance and raise their fluffy chicks. 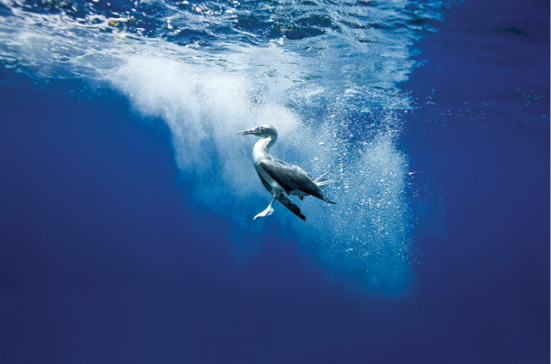 They say the brighter their feet the more attractive they are to a mate, which would make this girl the Beyonce of the blue-footed booby world. Apart from looking good, the colour lets other birds know just how strong and healthy they are.

That special blue is created by carotenoid pigments that also act as antioxidants, so only birds with a strong immune system can spare the concentrated pigments for their feet. And so it is that we learn a little something about natural selection in the place that inspired Darwin’s theory of evolution.

Over the course of our seven-night expedition voyage we have endless opportunities to think about the wonders of nature in a place that for the most part has avoided human interference.

Only four of Galapagos’ 13 major islands have human settlements and 97% is maintained as a national park. Thanks to the park’s monitoring and controlling visitor sites we rarely see another ship when we’re sailing the uninhabited islands and our guides make sure we only stick to the marked paths so that we leave the islands as untouched as possible.

While the total number of beds on all ships in the Galapagos is capped, there is no such restriction on land-based tourism and the rate of growth is causing some concerns. In 1985 around 18,000 visitors came to the islands. By 2018 that had blown out to 275,000 and there are fears loose regulations around the growth of guesthouses and hotels could contribute to pollution and invasive species.

On our ship, the respect for the islands is clear from the way our guides lead us to the food that we eat. In 2017 Lindblad Expeditions started working with the Galapagos local government to train and support local farmers. Despite it costing around twice as much to buy from the islands they’ve sourced more than 70 tonnes of local food to both help local farmers and reduce the ship’s carbon footprint.

When we visit in September it’s the coolest month of the year with average temperatures of 21C on land and 22C in the water. It may be on the cool side, but with the nutrient rich waters making this the perfect time to swim with baby sea lions, most of us jump at every chance to get in the water and gratefully accept the wetsuits provided on board. 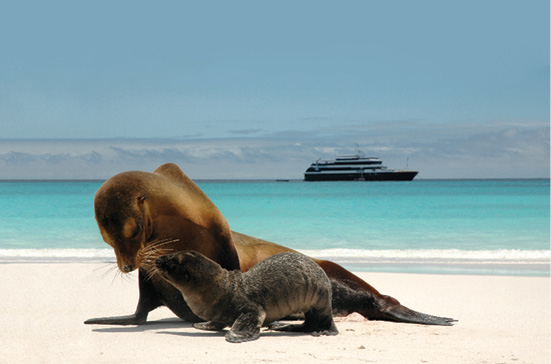 After every snorkel and dive excursion we gather in the bar to swap tales of underwater encounters. Along with those curious sea lion pups, guests swim with Galapagos penguins, reef sharks, spotted eagle rays and schools of colourful fish. For those who don’t feel comfortable in the water, a glass bottom boat provides a window on the world below.

As the only lizards in the world to dine on algae, some biologists argue that the marine iguanas we see basking in the sun are the most remarkable animals in the Galapagos. That may be true, but the most memorable reptile award has to go to the giant tortoises. 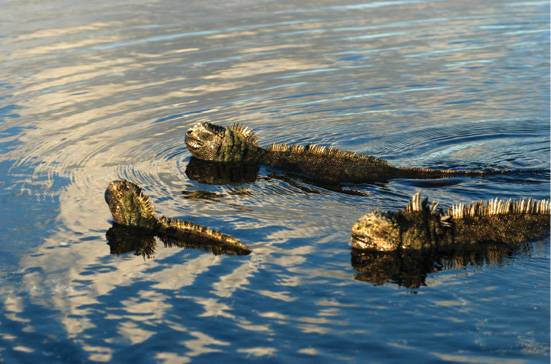 After a visit to the Charles Darwin Research Station on Santa Cruz Island where we see the taxidermied remains of the last Pinta Island tortoise, Lonesome George, along with baby and full grown tortoises at the breeding centre, we head up into the highlands to the El Chato Tortoise Reserve.

Here the largest tortoises in the world roam free and we can either stick with our guide or go free range ourselves. Galapagos tortoises can grow up to 1.8m long and weigh up to 400kg and as I sit in the grass and watch one walk towards me, I realise our heads are at the same height.

As he oh so slowly adjusts his path to walk past me there’s a moment where we make eye contact and it feels like I’m looking at an ancient being. It’s one of the most peaceful and extraordinary animal encounters I’ve had, and as he walks on by I know this is a moment that will stay with me forever. 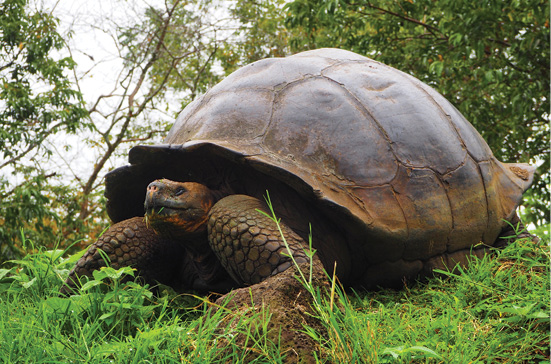