THE terracotta warriors might have put Xi’an on the tourist trail, but it’s the Chinese city’s old town that will encourage you to linger, writes Brian Johnston.

No real army of 6,000 would ever be this quiet. In the archaeological pits of Xi’an, serried ranks of soldiers and senior officers are immobile and silent, staring straight ahead in rigid battle formation. Yet the life-sized terracotta figures are surprisingly human. No two are exactly the same: some have moustaches, others hair knots, others slight smiles. In the adjacent museum, you can get a close-up look at some of the individual warriors and their subtly different appearances and uniforms.

The 2,000-year-old mausoleum of the first Qin emperor is one of the world’s most famous archaeological sites, and the main reason visitors come to Xi’an, capital of Shaanxi Province in north-central China. Some barely linger in the city itself, which is a shame. In the seventh-century Tang Dynasty, the city then known as Chang’an was prosperous, sophisticated and the biggest in the world. It remained the ancient capital of China under 11 imperial dynasties and is peppered with tombs, towers and pagodas. Its old town is marvellous, but Xi’an is also notable for great street food, shopping, performing arts and its friendly, relaxed atmosphere.

Xi’an also has China’s best-preserved and most extensive fortifications, which form a 14km loop that you can walk or cycle for panoramic outlooks. The old walls are punctuated by superb gateways at the four compass points. At the centre of this ring, where roads from each gate intersect, stands the city’s iconic Bell Tower, a majestic structure of wood and glazed tiles.

You can clamber up the fourteenth-century Drum Tower, a stone gateway that once gave warning of advancing armies, for splendid views. Gaze down to the north, and Xi’an’s street grids dissolve into higgledy-piggledy alleys, some so narrow that upturned eaves on either side almost kiss each other. This is the Moslem Quarter, one of China’s most wonderfully evocative neighbourhoods and home to the Hui ethnic minority, distinctive for their white caps or headscarves, their refusal to eat pork (the most common meat in China) and their continuing Islamic faith. 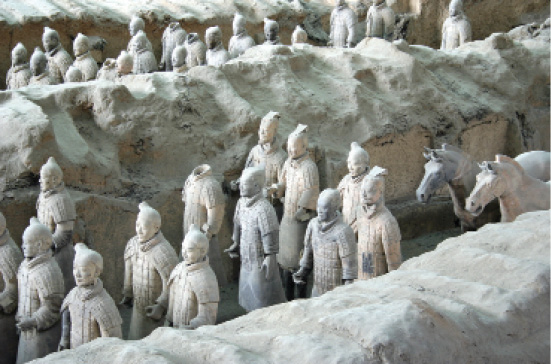 Plunge in and you might have strayed into a country town, rickety and rustic. Laneways are paved with soft grey flagstones and lined by wooden houses. Kids play on doorsteps and vendors hawk dried fruit and slices of sponge cake. Main streets are lined with pocket-size shops and open-fronted restaurants. In the evenings, red lanterns draped in trees add a soft romance, and a happy crowd shuffles back and forward for some neighbourly evening R&R.

People come from all over the city to sample the old town’s Moslem-influenced street food. Roujiamo, a slider of shredded meat in steamed bread, is the local equivalent of a hamburger. Eateries display pyramids of skewered meats for the finger-licking pleasure of passers-by, or serve them up on large rounds of flat bread to those who linger at pavement tables. More formal restaurants are found on upper floors, where you can get whole roasted lamb, spare ribs, stewed oxtail and lamb dumplings. Don’t leave without trying paomo, a typical Hui dish of mutton or beef soup poured over cubes of bread with pickled or fresh garlic or chilli added to taste.

In more evidence that Xi’an has some of the world’s best street food, you’ll find an endless variety of noodles too: flat noodles (mianpi), buckwheat noodles (hele) often eaten with sesame paste, and laingfen noodles shaved off a huge block of bean-starch jelly and dished up with chilli sauce. Nuts, seeds and preserved fruits are popular after-dinner nibbles, as well as a local speciality known as eight-treasures pudding, made from glutinous rice cooked up in little pots on streets stalls, then sprinkled with sugar and sesame seeds.

Wandering and eating is the best way to soak up the old-town ambiance, but an unusual sight is provided in Xi’an’s Great Mosque, established in 742, though current buildings are mostly from the eighteenth century. It’s a rambling complex of interconnected courtyards, traditional gardens and painted pagodas that could easily be mistaken for a Chinese temple until you notice the absence of dragons and the presence of Arabic calligraphy, splashing fountains and Islamic decorative motifs. A tiered pagoda serves as a minaret in this wonderful hybrid ensemble.

You’ll get lost in a tangle of alleys as you explore, but it hardly seems to matter. Maybe you’ll come across the covered laneways (Beiyuanmen and Huajie Xi’ang) that resemble a Middle Eastern bazaar. You can buy Little Red Books, scroll paintings, teapots and chopstick sets, or some of the brightly-coloured local folk scenes. Add Muslim prayer rugs and shawls to your haul, and Islamic-style daggers and blue porcelain: wonderful pieces of a distant culture in the heart of China.