JOHN Borthwick discovers why the heart of Spain should be top of travellers’ lists.

De Madrid al ceilo … “After Madrid there is only heaven.” The Spanish capital’s shameless brag tops even Sydney’s 1980’s boast (now outdated) about being “the best address on earth”.

As Spain’s largest city, with 6.5 million citizens, Madrid reveals its historic opulence in leafy avenidas and grand apartments, and for visitors in icons like the Palacio Real (residence of the King of Spain) and the celebrated ‘Golden Triangle’ of art.

The ‘Triangle’ comprises three stunning institutions on the Paseo del Prado, the Thyssen-Bornemisza, Prado and Reina Sofa museums. The Prado’s collection might be top-heavy with gloomy kings and crucifixions but the Reina Sofa is alive with superb 20th century art including Spanish masters like Braque, Dali and Miro, while its most famous work is Picasso’s great Guernica. 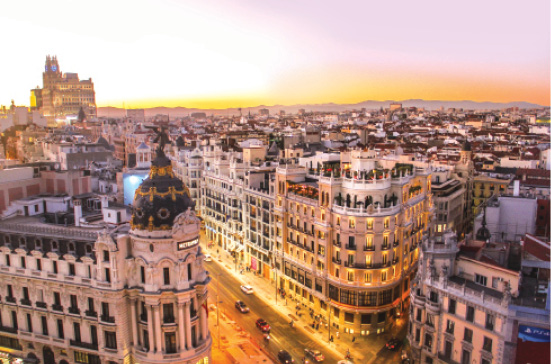 Madrilenos are night-owl extremists, so join right in. Tapas have evolved here into an inventive, progressive meal, especially if you bar crawl (it starts as a walk) in a cool area like Triball. A Madrid gin and tonic might arrive in a fishbowl-sized balloon glass (two of them and you’re in the bowl; three and you’re the fish) but stay clear-headed enough to later find a good flamenco club like Corral de la Moreria and catch a stage performance that, in a thunderstorm of guitars and heels, evokes the devil and angels duelling in dance.

Madrid, right in the middle of the country is an ideal base for further explorations, starting with the surrounding Central Spain provinces. Historic Toledo, for instance, a UNESCO heritage city surrounded by the Tagus River, is only half an hour by train from the capital. Time in this former national capital is layered from Romans, Visigoths and Muslims to the Spanish empire, with grand structures like the 13th century cathedral and the Alczar drawing visitors year-round. Keep in mind when packing that the seasonal temperature variations in Central Spain can be extreme. The locals jokingly describe their climate as “nine months of winter and three months of hell”.

Step onto the train at Madrid and an hour later you step off into the era of Cervantes and Don Quixote. Cuenca (pronounced “kwenka”), a World Heritage-listed town, east of Madrid in Castille-La Mancha region, is one of Central Spain’s lesser-visited historic gems. Here is the 17th century writ in stone, with monasteries and convents plus a pocket Gothic cathedral. Visitors can stay in converted cloisters or the grand, riverside parador. Cuenca’s old town is renowned for its casas colgadas — hanging houses — that cling like limpets to the cliff-face above the Huecar River. Meanwhile, antiquity isn’t everything, with Cuenca also being home to the Museum of Spanish Abstract Art.

When it’s time to explore beyond Madrid and the central provinces, Spain’s rail system is ideal. Keep in mind that trains leave right on time and security can be tight. At Madrid’s Atocha station the boarding gates close two minutes before departure: no exceptions, no stragglers. And if traveling in high seasons (almost year-round now), reserve your seats as far in advance as possible.

Cordoba, two hours south of Madrid, is home to the astonishing, UNESCO-listed Mezquita Catedral, the Mosque Cathedral. Built by the Moors, its forest of columns and palm-like archways forms an extraordinary oasis in stone. (Even so, following Spain’s expulsion of the Moors in 1492 the unique mosque was symbolically slam-dunked right in its centre with a grandiose cathedral.) Elsewhere, Cordoba is about cobbled lanes with plazas that are perfect for waffles and coffee in the afternoon, and then wine and dining until midnight. Further south in Andulasia are the equally phenomenal Moorish glories of Granada and Seville. 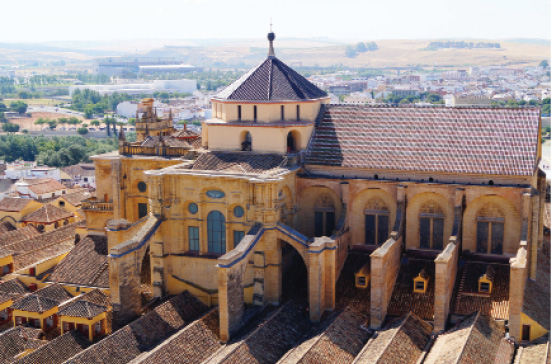 In northeastern Spain, Barcelona, the capital of Catalonia, is encrusted with both Gothic and Gaudi architecture. It’s a sprawling city but you can focus on its defined “discovery routes”, including the Roman, Picasso and Modernista routes, while the popular Ruta Gaud is rich with this exquisite designer’s smaller-scale works. Don’t miss the Gothic Quarter (Barrio Gotico) or nearby, the long and leafy La Rambla (aka Las Ramblas) boulevard which the great poet Federico Garca Lorca called, “the only street in the world which I wish would never end.” Life, as they say in here, is what happens between meals, so tapas bars are ubiquitous. Barcelona’s passions range from gastronomy to sport, with the famed Barca Football stadium and museum being major attractions. 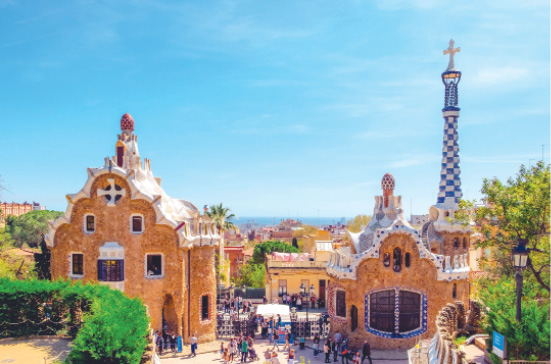 Northwest Spain has a one thousand-year tradition of pilgrimages. While the most famous ones are the numerous ‘Camino’ trails that wind their ways towards Santiago de Compostela, for more secular pilgrims the trek today is to Bilbao further east on the same coast. Here, a once declining town has been reborn with spectacular infusions of new architecture, the standouts being Frank Gehry’s titanium Guggenheim Museum (not to mention its contents) and Norman Foster’s Metro system. Amid these superstars the historic Basque Casco Viejo (Old Town) lives on, as ever. 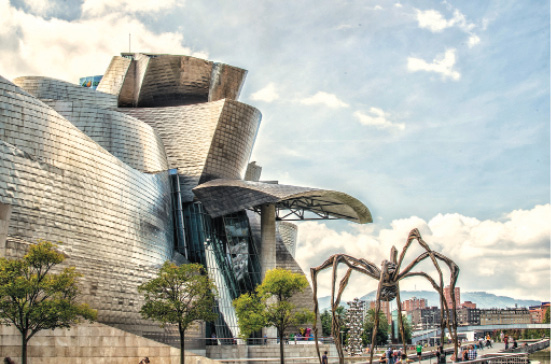