Getting to Ireland has never been more accessible and affordable, with the increased air links inspiring many Australians to start or finish their Europe trip in the destination, Sofia Hansson, regional manager Australia and New Zealand, Tourism Ireland told travelBulletin.

The Australian market has seen positive growth in recent years, on the back of a more than 60% boost in Australian visitor numbers between 2011 and 2016.

“The outlook looks positive and with new air access, we’re positive with this market,” Hansson said.

But it’s not simply access which is luring travellers to the destination, with Hansson explaining that upon arriving in Ireland, visitors enter a land of warm welcomes and great storytellers.

“Some people say the Irish are the best storytellers in the world and it’s just the friendliness and openness which kind of brings everything to life… you could ask for directions and make a friend along the way.”

The tourism board is focussing on drawing travellers to three touring routes: The Wild Atlantic Way, The Causeway Coastal Route and Ireland’s Ancient East.

The Wild Atlantic Way has the allure of being the world’s longest defined coastal touring route, exploring soaring cliffs, buzzing towns and cities and hidden beaches and bays. 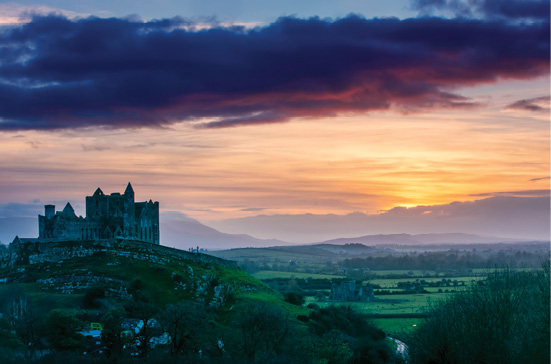 It ventures from Donegal down to Cork through nine counties, offering visitors the opportunity to connect with the friendly locals in the little villages and feast on locally grown food and freshly caught seafood right from the Atlantic.

“It’s about the dramatic, unique landscapes. The very edge of Europe,” Hansson added.

The Causeway Coastal route allows travellers to begin or end their journey in Belfast to spend some time soaking up the sights of the historic city before embarking on the journey.

Tipped by Hansson as “one of the most spectacular routes in the world in terms of scenery”, the itinerary wraps around the Atlantic coast to finish in Derry (Londonderry) and is speckled with unique landmarks including the Giant’s Causeway and the Carrick-a-Rede rope bridge.

Game of Thrones fans can also delight in the many Game of Thrones locations such as Cushendun Caves, where the “shadow baby” scene was filmed, while whiskey fans can settle in for a whiskey tasting at the Old Bushmills Distillery.

The third route in Tourism Ireland’s sights is the Ireland’s Ancient East itinerary, which focusses on the history and heritage of the destination.

“It’s a journey through 5,000 years of history in a very unique, beautiful landscape,” Hansson said.

The four-day journey travels from Dublin to the plains of Kildare, and meanders through the counties of Meath and Westmeath, zoning in on the castles, myths and legends of the area.

Tourism Ireland’s initiatives target the core audience of the “culturally curious traveller”, who Hansson said was “very interested in culture heritage and getting off the beaten track and experiencing really unique locations”.

The destination is also popular with a younger audience looking for adventure, to explore cities and get off the beaten track.

Agents looking to update their knowledge on Ireland and be in the running to win a spot on a famil can take part in Tourism Ireland’s recently revamped Ireland Specialist program, which has been refreshed with content detailing what’s new in 2018.

Tick off some Irish locations on your bucket list with Back-Roads Touring’s The Emerald Isle tour. Travelling in a small group of no more than 18, the 12-day itinerary starts in Dublin before heading to Belfast where travellers visit the Titanic museum. They then journey onwards to the Giant’s Causeway, followed by Londonderry where guests learn about the devastating Irish Famine. Free time in the buzzing city of Galway, and the Dingle Peninsula allows guests to refresh and explore as they wish, before visiting the stunning Killarney Lakes, Blarney Castle and Kilkenny.

Prices for The Emerald Isle start from $4,699 per person, twin share.