The city of Albuquerque in New Mexico will again play host to the International Balloon Fiesta next year.

To be held between 3 October and 11 October next year, the festival is a world-renowned attraction and has been running for more than four decades.

In the first week of October every year, the fiesta sees hundreds of hot air balloons taking flight from the Balloon Fiesta Park.

There are special shape balloon rodeos, competitions and twilight balloon glows — which see the balloons all turn on their burners at the same time to create a spectacular moment in the evening. 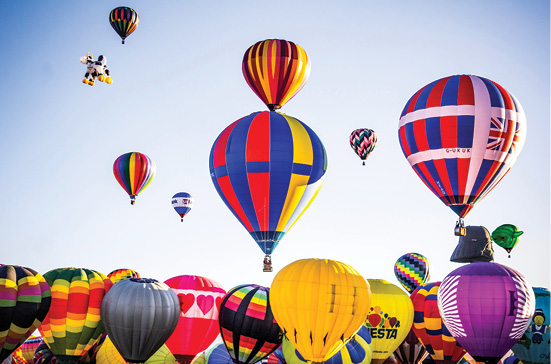 Last year’s event saw 550 hot air balloons take off, flown by 650 pilots from across the world, with over 886,000 guests attending across the nine days of the festival.

One event not to miss is the Mass Ascension, when all participating balloons launch in two waves, lead always by a balloon flying the American flag to the tune of The Star Spangled Banner.

The festival began in 1972 with only 13 balloons and now sees over 500 balloons take off from a specially designed Fiesta Park, the size of 54 football fields all put together. The Fiesta is also the most photographed event on earth, and the largest international event held in the US.