From the sky to the sea

Sometimes when you embark on something new and particularly challenging, there may come a moment when you realise you’ve bitten off way more than you can chew but it’s too late to turn back. For me it was watching my then nine-year-old daughter, fresh off training wheels, come tumbling off her bike along the epic Alps2Ocean Trail (A20). There were tears, angry shouting; I’m pretty sure rocks were thrown in my direction.

A couple of testing hours later however, something thankfully shifted. As my daughter’s tiny legs pumped her up the rocky trail, we crested a rise and the shimmering lake opened up before us, while beyond loomed immense snow-capped mountains. There were woops of elation. My daughter fist pumped the air. Maybe, just maybe, we could do this after all. 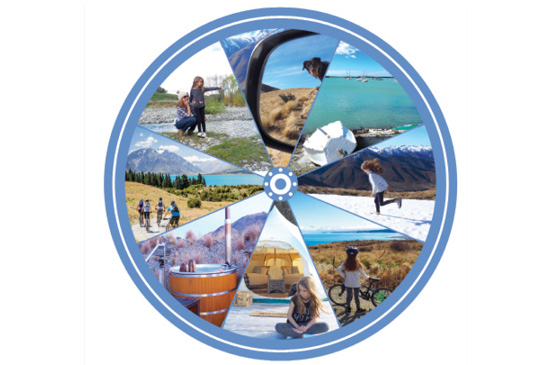 We’d started our journey just outside of Lake Tekapo where we joined the 301km Alps2Ocean, listed in Lonely Planet’sEpic Bike Rides of the World. We were seriously unprepared. Being an occasional weekend cyclist at best, I’d hastily borrowed a pair of bike pants at the last minute. My daughter, who’d only just learned to ride unaided by training wheels, insisted bike pants were unnecessary.

Most of the A2O is off-road and on our first day the trail skimmed alongside the ethereal lake, given its distinctive blue tinge because of the crystallisation of rock flour. The official start of the A2O however is some 35km away at Mt Cook, New Zealand’s highest mountain. Aoraki, or Mt Cook, means cloud piercing in Maori and with clear skies we were lucky enough to see it.

Mt Cook may be the official starting point of the mostly downhill trail, however it’s also a tricky place to set off from. After cycling a short distance, cyclists must be choppered across the Tasman River at a cost of $125 per person (minimum of two cyclists). Hence why we set off at the head of Lake Pukaki instead.

After pushing out 10-12 hard-earned kilometres we make our way to Twizel, the base for Cycle Journeys who are facilitating our trip. Being the novices we are, we couldn’t have done it without them, although plenty of experienced cyclists do.

Along with our guide Geoff, Cycle Journeys fits us out with fantastic bikes and drives us to trail highlights we can cycle with my daughter, while our luggage is transported ahead of us to each night’s destination. It makes doing the trail, especially with children, achievable, enjoyable and interesting, as Geoff doubles as a local tour guide. My daughter is their youngest client to cycle the A2O, while the oldest was a 92-year-old who did it on an electric bike. 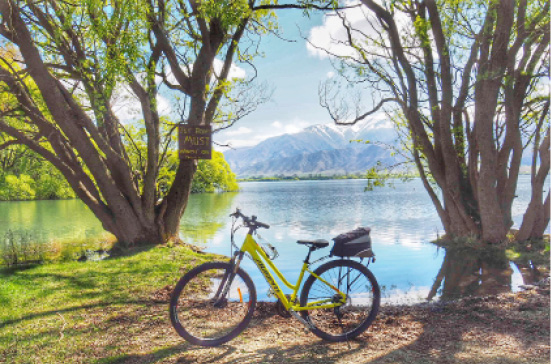 Our first night is spent at Skyscape, a phenomenal 6,000-acre sheep and beef farm where you stay in accommodation built predominantly of glass. Skyscape, an A2O partner, is almost completely concealed in the landscape by its grass roofed covering. It looks out over neighbouring Ben Ohau Station, where the final battle scene inLord of the Ringswas filmed. We fill up Skyscape’s incredible al fresco bath and take a soak, glass of wine in hand (for me), as the stars come out to play.

The next morning plans for a cycle along Lake Ohau are scratched. Ohau is a Maori word meaning “place of wind” and today it lives up to its name, making cycling tricky. Instead we set off from Lake Ohau Lodge, heading towards Omarama along a rocky trail. It’s tough going for my daughter, not used to traversing a shingled path, but the landscape makes it worth it: looking back across the basin to the Ben Ohau Range, dusted with snow even mid-spring.

Our best day on the A2O however is the third day, cycling from Omarama east down the Waitaki Valley, descending along the edge of Lake Benmore to Pumpkin Point. By this stage, my daughter is comfortable in the saddle, and we laugh as we race each other down the dirt trail along the picturesque hydro lake, one of three, where families picnic and paddle kayaks. Geoff hovers in the distance, but my daughter waves him off riding confidently with her legs going a million miles an hour.

We end our day at Pasquale Kurow Winery, in the Waitaki Valley, after cycling through rows of neatly planted vines. Conveniently the trail passes right through the vineyard. We sit contentedly with the sun on our back, a phenomenal tasting platter and bottle of estate-grown pinot gris before us.

There are other highlights too, but I particularly loved the harbourside town of Oamaru, where the A20 officially ends. The trail concludes at the picturesque Friendly Bay overlooking the Pacific Ocean, where we gather for a photo inside an oversized A20 photo frame on the foreshore. We haven’t cycled anywhere near the whole trail, but it still feels like an achievement. “I told you I wouldn’t need bike pants,” my daughter says and I roll my eyes. Seriously, be sure it’s the first thing you pack. You’ll need them.