The Maritime Provinces, facing the turbulent North Atlantic Ocean, are wind-whipped and rugged, yet Canadian-cute as well. Seals with twitching whiskers slump on chilly beaches overlooked by winking lighthouses and battered fisherman’s cottages. Inland, clapboard houses sit around churches with white steeples, and undulating countryside is dotted with red barns.

The collective name for the provinces is apt, since maritime history is palpable in its trim colonial-era villages and multicultural port cities. You’ll find friendly people, tranquillity and the feeling you’ve been transported back to a gentler time in what might be described as Canada’s version of New Zealand.

New Brunswick is the only Maritime Province firmly anchored to the mainland, as it shares a border with Quebec and Maine. Provincial capital Fredericton, which overlooks the St John River, is a handsome brick town of tree-lined streets with an interesting history of early British settlement.

To the south, busy port St John, with its sea-searching views, exemplifies the maritime spirit of this corner of Canada. It has a busy boutique-brewery scene and lively cultural life, and you can dine on lobster hauled from the sea just that morning. In fact, you can eat well everywhere in the Maritime Provinces: the lobster, scallops, cold-water crabs and salmon are superb.

St John sits on the Bay of Fundy, sheltered by the New Brunswick coast and Nova Scotia across the water. The bay is studded with sculpted rock stacks and cliffs pounded with waves at aptly-named Cape Enrage, a popular spot for zip-lining and rock climbing. The world’s highest tides here (over 15m) allow you to walk across the seabed at Hopewell Rocks at low tide. A dozen species of whale also make this a prime whale-watching destination. 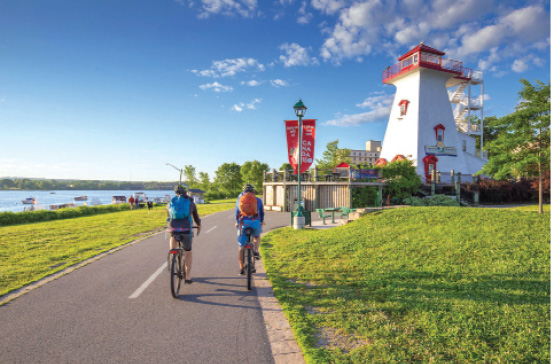 The northern coast is much more tranquil, since it fronts the deeply indented Gulf of St Lawrence. It’s interesting for its Arcadian culture. Le Pays de la Sagouine recreates an historical village of this French-immigrant community, who first arrived in the early 1600s. It’s a lovely region in autumn, when dahlias and fat pumpkins add colour to cottage gardens. The landscape, heralding the departure of Canada geese for the winter, erupts in a fiery display of scarlet hillside maples and crimson-coloured bog plants.

This almost-island is an indented, island-fringed peninsula connected to New Brunswick by a narrow neck of land. Joggins Fossil Cliffs on this side of the Bay of Fundy are World Heritage listed. Even better, though, is the highland scenery of Cape Breton Island at Nova Scotia’s eastern end, where you can hike sections of the 300-kilometre Cabot Trail.

Nearby is Alexander Graham Bell National Historic Site, dedicated to the inventor of the telephone. Historic fishing towns such as Chester and Lunenburg are lively with fish-and-chip shops, boat builders and cheerful summer festivals. 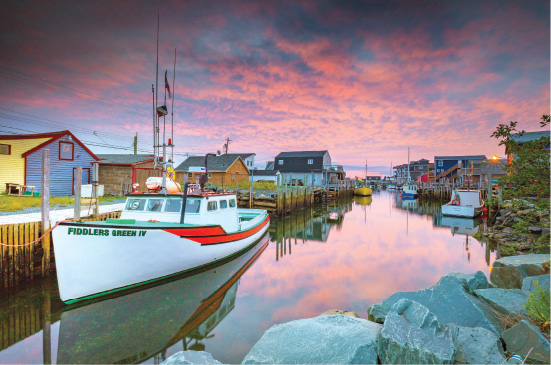 Halifax, Nova Scotia’s capital, sits on one of the world’s largest natural harbours, which made it an important naval base during the British Empire, as you’ll see from its eighteenth-century fortifications and Historic Properties district. Later, a million Canadian immigrants arrived through this port, brilliantly outlined at Pier 21 Museum. The town has a very youthful energy and more pubs than any other city in Canada — just the excuse to try the local Alexander Keith beer. The wind off the Atlantic along the town’s zigzagging seaside promenades will put a spring in your step.

Sheltered PEI, joined to the mainland by Confederation Bridge, is Canada’s smallest province, tucked into the protection of the Gulf of St Lawrence. Seaside towns Murray Harbour and Georgetown offer some of the best seafood in Canada and are fronted by harbours filled with fishing boats above which seagulls swirl. Graceful provincial capital Charlottetown, with its elegant historic homes and pocket-sized parks, sits on a fine harbour between two rivers.

Head along Green Gables Shore for some of the island’s best scenery, including the fabulous sand dunes and rust-red cliffs of PEI National Park. Green fields and meadows of purple wildflowers meet blue ocean and blustery white-sand beaches. You can also visit the farmhouse and author’s home associated with the 1908 novel of an optimistic red-haired orphan, Anne of Green Gables, which brought PEI to international fame. 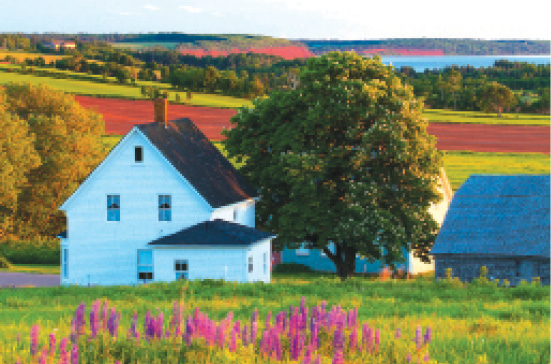 Half this island province is covered in farmland. Turn inland and you’ll find a pretty, rolling landscape dotted with red barns, white homesteads and championship golf courses. Sedate and friendly towns have an underlying flavour of Celtic culture thanks to PEI’s Scottish immigrant history. This is a place to unwind, get lost down country lanes and be pleasantly diverted in quaint villages such as Victoria. Life is lived at a slow pace in the Maritime Provinces, and you may wish you’d lingered longer.