FLANDERS in northern Belgium is mostly off the beaten tourist trail, and yet offers one of Europe’s loveliest and most history-dense destinations. Brian Johnston explores this European treasure.

ost Australians associate Flanders with the cataclysm of the First World War, the battles fought in Ypres and Passchendaele, and the endless rows of white headstones that now poignantly mark the graves of the fallen. Yet while a visit to the monuments and museums that tell the story of the Australian and other soldiers who died here is moving and insightful, there are plenty of reasons to linger longer in Flanders.

For centuries Flanders prospered at the heart of European affairs. In the fifteenth century, its cities were immensely wealthy centres of trade, education and innovation. Architecture and arts flourished. The result? Listed buildings fill entire late-medieval and Renaissance-era old towns that are neither grand or pompous. Instead of palaces you get ornate town halls and agreeable squares and the trading houses of wealthy burghers.

This isn’t history dominated by kings but ordinary men — and women. Almost every old town has a beguinage, or convent-like ensemble of houses, chapels, breweries and hospitals in which remarkably independent medieval women lived in self-sustaining collectives. They’re among the prettiest places in Flanders — many are World Heritage listed — and give a fascinating female voice to a male-dominated world. 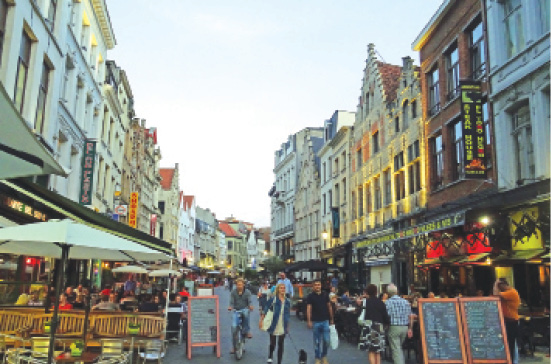 For density of delights, you might want to make a start in Flanders’ two best-known cities. Bruges (or Brugge to the Flemish) has a famously pretty old town that sits astride swan-paddled moats and canals. It’s especially notable for the Gothic architecture of its guildhalls, gabled houses and belfries, and for its very impressive dining scene — 15 of its restaurants have been awarded Michelin stars. Ghent, meanwhile, has an almost equally impressive old town but, being also an industrial city, a much livelier local feel and good shopping.

Bruges and Ghent are the only places in Flanders where you’ll encounter large numbers of tourists. You’ve done yourself a disservice, though, if you only visit Bruges and Flanders’ war sites, because several unsung cities are very rewarding and a lot of fun. The Flemish have always been rebellious and festive, with a liking for beer and hearty meals; the sort of folk you see partying in paintings by Breughel.

Hard to say which is its merriest city. Antwerp has great nightlife. On summer evenings the entire city centre hums with the energy of a thousand restaurants, bars, beer cafs and dance clubs. Look up as you crawl from one to another and you’re surrounded by fantastic facades where the Gothic, half-timbered and Renaissance styles collide. Grote Markt, the main square, is a gilded delight of delicately sculpted facades fluttering with colourful flags.

Leuven also has quite the reputation for its fun-loving lifestyle. This is an ancient yet youthful university town of 50,000 students. Oude Markt lays claim to being the ‘longest bar in Europe’ — an uninterrupted row of outdoor tables belonging to 42 bars that runs around the entire square. Historically, this was also Belgium’s beer-brewing capital. You can visit the enormous Stella Artois factory — the famous brand was first produced in Leuven in 1366 — and lunch at boutique alternative Domus, whose beer is piped straight from vats into an old-fashioned pub front.

Leuven is one of those underrated European towns that gets no tour-group visits and has no big-name sights, but provides a glorious opportunity to escape from castles and cathedrals. Kick back at a terrace table, wander the streets — student accommodation now fills the ancient beguinage — and admire the architecture. Its town hall is the best on the continent, a medieval gem of ornate arched windows, statuary and cascading geraniums. If it were the only thing in Leuven, it would still be worth the journey.

Not that you need to journey far. Leuven is just 17 minutes by train east of Brussels airport. Another of Flanders’ wonderful towns is about the same distance north. Few people have heard of Mechelen, but it too provides many satisfactions. From the train station, you walk over canal bridges and down the main shopping street and arrive at Grote Markt, a dainty scaled-down square of unsurpassed loveliness, surrounded by gabled houses and anchored at each end by town hall and cathedral.

Mechelen has 300 listed monuments: an archbishop’s palace, a fabulous cathedral tower that allows you to clamber among the bells, a church hung with Rubens paintings, dozens of lopsided, gingerbread houses along canals. If such a place were in Italy, you’d be jostling the tourist hordes for overpriced pizzas at caf tables, and feeling frazzled. In Flanders, you just pick your spot and join the locals over pots of steaming mussels and a good beer. Overhead, saints and weathervane roosters cavort on rooftops, and you just feel mighty satisfied that you’ve found this delightful and peaceful place.