PENGUINS, whales and icebergs are usually the things you’re expecting to see on a cruise to Antarctica, but as Ben Groundwater discovers, it’s the human element of the white continent that will surprise you.

You’ve probably never wondered what Ukrainian scientists do with their spare time. It’s not something that requires much thought in most of our everyday lives. And yet here you are in a research base in the heart of Antarctica, in a pod that feels like a space station, cloistered from wind and snow in the same way you would be shielded from the dark emptiness of space, looking around the quarters of the scientists who live here, peering into their lives and wondering: what do they actually do here? The answer is fascinating, and not entirely comforting.

This is Vernadsky Station, an active Ukrainian scientific base on Galindez Island, a rocky outcrop within paddling distance of mainland Antarctica. The station is one of the most accessible on the continent, in the northern reaches of the Antarctic Peninsula, and it’s a regular stop for cruise ships, which call past here to introduce visitors to the human side of a very inhuman place.

People live here in Antarctica. Not always full-time, but still, they do entire winters within four walls here, winters where they receive no visitors, where the dark and the cold could surely drive you mad. 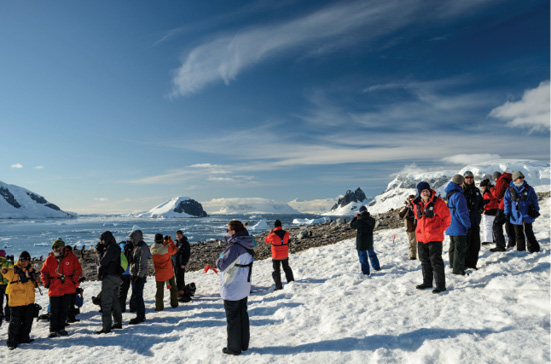 But they don’t seem mad. The scientists who greet us the day we arrive — a brilliant afternoon, sunny and warm by Antarctic standards — are generous and friendly, happy to see new faces, only too pleased to take us on a tour and give us a window into their lives.

Most, admittedly, are on board the cruise ship. On mine there’s Augustin, the cruise leader, an Argentinian with a witty turn of phrase and a passion for the world’s most inhospitable continent. Then there are the two Austrian guides who cycled around the world before taking this job, who decided to ride their bikes south from Norway and stop when they got tired and made it all the way to Cape Town. And continued.

There are the fellow passengers, the Spanish students on the field trip of a lifetime; the Dutch couple with the quirky sense of humour; the English friends spending all their money; the Aussie blokes here “for a good time, not a long time”.

An Antarctica cruise involves a lot of time on a ship — it has to, with a three-day crossing of the Drake Passage, from southern Argentina, to get there, and another three-day crossing to get back. And there’s another five days of zipping around the Antarctic Peninsula.

You come here for the penguins, but they’re such a small part of the adventure. Mostly it’s the people, those you spend long days at sea with, those you sit next to in the dining room, that you relax with in the lounge.

Everyone is so well behaved on the outward journey, attending every lecture, listening diligently, getting to know everyone else on board. We all wake early for shore excursions once we’ve arrived. We go to bed early to prepare for exciting days. 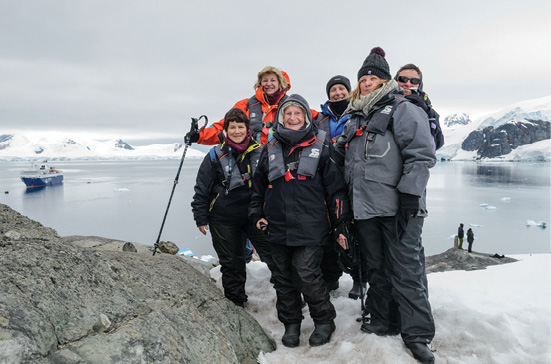 It’s only on the return trip that people revert to their travelling type, that everyone starts drinking and dancing and adding new memories to an already amazing trip.

You don’t meet many new people on Antarctica proper. Near the Ukrainian research base there’s the spectre of explorers past at Wordie House, the former British station that has been left just as it was when it was deserted in 1954, complete with wood-burning stove and canned supplies. People lived here once, battling the formidable elements.

Now though, the only inhabitants are those at Vernadsky Research Base. They work here. They live here. They play here. 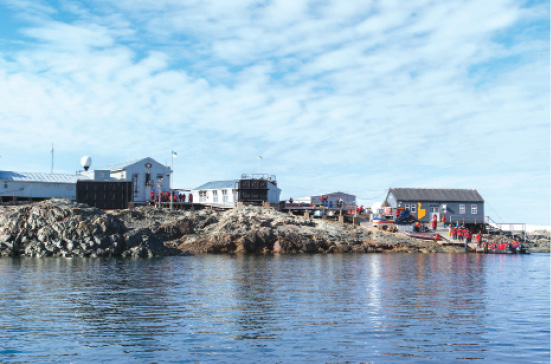 And what does that entail? They play football, the scientists explain. Turns out there’s another research base close by, and on sunny days the crews take to the frozen ground outside their cabins and boot a football around and challenge for a cup.

They watch TV. They play chess. Oh, and they distil their own vodka using Antarctic sheet ice and use it to stock their own bar, which has a pool table and a stereo, and is covered in various bits of paraphernalia from around the world, and what looks like about 200 or so bras.

Here’s the deal for visitors at Vernadsky Station: a shot of home-distilled vodka will cost you one US dollar. If, however, you opt to slip your bra off and leave it behind at the bar, the drinks are free. Those questionable souvenirs are now strung up around the room and most definitely do not get used for any other purpose during the long winters.

As you shoot vodka and play pool and listen to AC/DC and prepare to head back to the ship for another adventure, it dawns on you that it’s perhaps best to not consider what Ukrainian scientists do with their spare time.