AIRCALIN has entered a new era, with the carrier the first in the Asia-Pacific region to begin operating an Airbus A330neo flight to Sydney.

The international airline of New Caledonia last month began flying to Sydney twice a week, on Tuesdays and Fridays.

The A330neo has improved aerodynamics and an optimised structure, is powered by new generation Trent 7000 Rolls Royce engines that provide a quieter propulsion system, with improved fuel economy and a longer range. It has a capacity of 291 seats in three classes, all of which provide in-flight entertainment and onboard connectivity, a very quiet cabin, optimised layout and a modular lighting atmosphere. 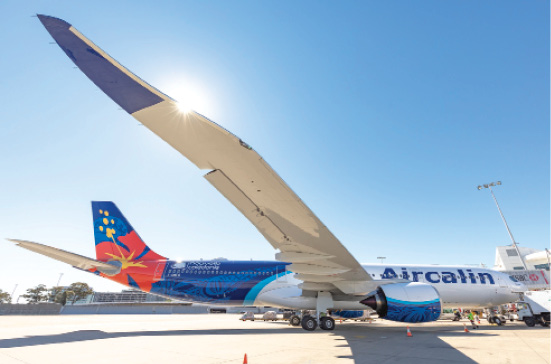 Aircalin CEO Didier Tappero said, “The purchase of the A330neos will enable Aircalin to have modern efficient aircraft, providing the best travel conditions to Aircalin’s customers.

“With determinedly New Caledonia-style cabins and colours, our aircrafts will proudly display New Caledonia’s colours across the Pacific.”

The arrival of the first A330neo is part of a complete fleet renewal plan for Aircalin, with another A330neo due for delivery this month and two new A320neo aircraft in 2020 and 2021.