OCEAN cruise ships have arguably experienced the greatest level of environmental scrutiny when compared to other travel segments, but is this perception fair? Adam Bishop investigates.

Historically viewed as floating fuel guzzlers, cruise lines operating ocean cruise vessels have, by and large, taken great strides to mitigate their carbon footprint through a variety of measures, including the migration towards using cleaner LNG fuel, the implementation of advanced exhaust cleaning systems, and the use of shore-side power capability, to name just a few.

Cruise Lines International Association (CLIA) Australasia Managing Director Joel Katz is one man who views sustainability as a key element of the ocean cruise sector’s future trajectory, describing the ambition of becoming even more sustainable as “absolutely vital”, not only from a business and public relations point of view, but also, from a moral one.

“The successful tourism businesses of the future will be those that can show their efforts are meaningful and make a difference,” Katz contends.

“This has been the most important focus for the cruise industry over recent years and CLIA Cruise Lines have invested more than US$22 billion in ships with new energy-efficient technologies and cleaner fuels in response,” he added.

Katz also believes the optics of cruise ships being so large is another possible reason as to why ocean cruising receives a disproportionately higher level of scrutiny than other modes of travel.

“Cruise ships are highly visible by their nature, but that just underscores the importance of taking action and being able to demonstrate real progress,” he said.

“To put things in perspective, cruise ships represent less than 2% of world tourism and less than 1% of the world’s commercial shipping fleet, but they are at the forefront of the maritime industry in developing new technologies that can be deployed not just among cruise lines but also in other areas of the maritime sector,” Katz added.

Late last year, CLIA underscored its commitment to lowering the cruise industry’s emissions by outlining some ambitious goals in its third annual Environmental Technologies and Practices Report, headlined by the target of achieving a 40% reduction in emissions by 2040.

“While we are encouraged by and proud of the progress we’ve made, we know there is still work to be done,” he added.

So, what does the path for carbon emissions reduction for cruising look like?

For CLIA, the strategy is very much a four-pronged approach and involves making sure that cruise ships of the future are far more sustainable than what they are today.

Key figures from the report show that there are certainly some encouraging signs that this roadmap is taking shape.

The 2019 figures found that 44% of new-build capacity will rely on LNG fuel for primary propulsion rather than straight fossil fuel, a significant 60% increase on overall capacity compared with 2018.

The report also showed that more than 68% of global capacity are using Exhaust Gas Cleaning Systems (EGCS), a 17% bump on the previous year, with the devices used to allow ships to meet or exceed their emissions targets. 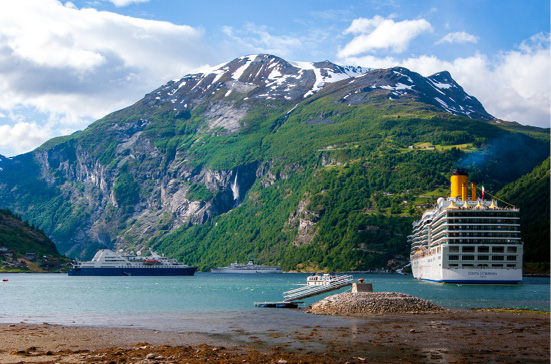 Open-loop EGCS devices utilise seawater to scrub the exhaust and the resultant washwater is then often mixed with fresh seawater before being discharged into the sea.

CLIA Cruise Lines now also have 68% of its fleet using advanced wastewater treatment systems, with all new ships on order specified to have these advanced treatments systems installed.

Shoreside power is another major weapon in the fight against carbon emissions, with cruise lines increasingly adopting technology for their ships, enabling vessels to switch engines off and be powered by a land-based supply when docks have the technology in place.

Despite these heartening numbers, Katz also points out that implementing sustainability objectives in the cruise industry goes far beyond carbon emissions alone, with issues such as over-tourism for example, a hot topic of discussion at Travel Daily’s Sustainability Summit last year.

“CLIA has been working closely with communities around the world to ensure the economic impact of tourism can be maximised and that the destinations we visit can benefit in the long-term from advances in areas like education, healthcare and economic development,” he said.

“We are also working with several key communities on measures to ensure sustainable visitation, such as in Dubrovnik in Croatia, where we’ve achieved a landmark agreement to manage tourism in a way that is responsible in the long-term”.

But these initiatives and objectives are not intended to be static, with Katz conceding there are always more ways to cultivate sustainability pathways and promote the good work the industry is doing to keep the marine environment as protected as possible.

“There’s always more than can be done to highlight what the industry is doing, that’s not just a PR function, it’s also an important part of raising awareness across the travel industry and making environmental considerations a big part of the culture in our organisations, big and small,” he said.

“The longer-term visions we have for emission reductions will rely on technological advances that are still in the pipeline, so the biggest challenge will be to support the research and development process that will unlock future breakthroughs.

“The advances being implemented now will naturally evolve and improve, but the maritime industry has gone one step further by proposing a US$5 billion research and development fund aimed at achieving commercially viable ships with zero carbon emissions by the early 2030s”.