JENNY Piper discovers why reality can be even better than expectations on a expedition cruise to the world’s most northern regions.

Anything is possible at least once, even a wooden oven,” are the words uttered by Tomasz, our expedition leader as he was asked, for probably the hundredth time, “will we see polar bears?”

Everyone had boarded Hurtigruten’s newest ship, Roald Amundsen with high expectations. After all we were in the Arctic, spending 12 days cruising from Svalbard to Iceland with five days exploring North East Greenland National Park — this was a once in a lifetime trip and we all wanted to see a polar bear. 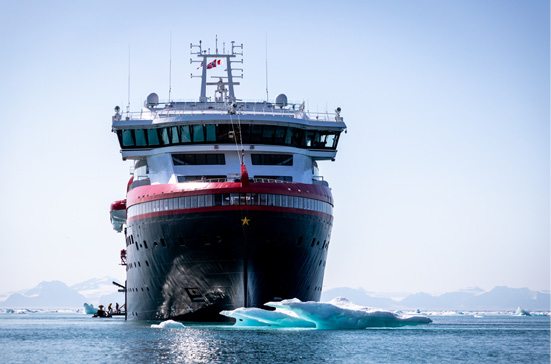 An adventure was ahead and expectations and excitement were high. One of the first things on the agenda for passengers (after the safety demonstration of the ‘survival suit’ — just in case) was being assigned to their expedition group and being kitted out for their landings. Expedition groups were named after whales, sea birds or mammals. Luckily our group was the Arctic Foxes which although not quite as good as being a Polar Bear in my eyes, was better than being a bird! Every guest received a complimentary waterproof jacket and was loaned some serious waterproof boots to be used for the duration of the cruise for when we did shore landings.

Being my first foray into expedition cruising, I wasn’t sure what to expect. The itinerary was very vague, unlike a regular cruise which has dates, times and ports all organised. A flexible attitude is a necessity as you don’t really know what the day will bring — weather and other conditions determine whether activities and landings can go ahead. Our kayaking was cancelled one day as a polar bear had been spotted in the vicinity and it’s too dangerous to risk being on the water with one nearby somewhere. 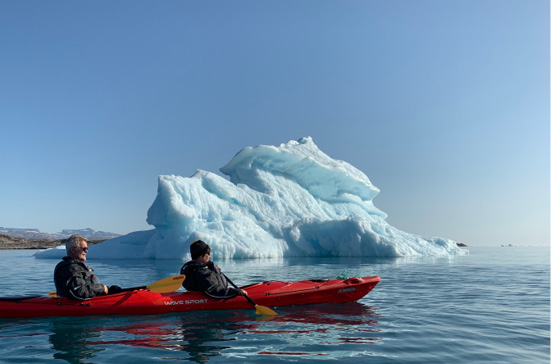 There are usually plenty of days at sea or just time on board on such a cruise, as large distances sometimes need to be covered. And landing days are spent with group departures being staggered throughout the day, as only so many passengers can be on land at any one time due to the sensitivity of the environment. But that is part of the fun of being in such a remote and magnificent part of the world. There’s time to stop and reflect on the majesty around.

But don’t fear there is plenty to keep travellers occupied. Roald Amundsen is the first in a new breed of hybrid powered ships especially designed for the expedition experience. The Science Centre is an integral part of the ship, a hub for educational activities and learning. There are lectures scheduled throughout the trip as well as the opportunity to delve deeper with a laboratory area equipped with microscopes, plenty of reference books to peruse (a twitcher’s delight) as well as a dedicated photo centre.

For relaxing or watching the scenery go by, the Explorer Lounge and Bar has plenty of comfy lounges and armchairs, as well as window view seats where travellers can keep their eyes peeled for the elusive narwhal. This is the social heart of the ship with guests spending time here chatting, playing cards, drawing, reading or wildlife watching with three sides of panoramic windows. And wow — it’s hard to find the words to explain the scenery. There were days where the ship was moving at walking pace as it negotiated the sea of ice (literally everywhere), then other days where we would be sailing past massive icebergs. Always looking out for wildlife — birds, seals, whales and of course, polar bears. And when something was spotted, everyone headed for the best vantage points. 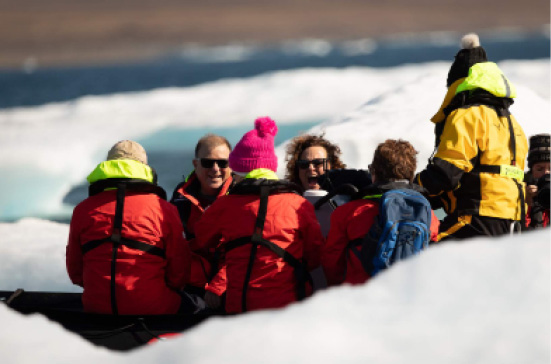 For those who don’t want to just sit there are other activities to enjoy — a well equipped indoor gym, sauna and wellness centre offering indulgent spa treatments. Outdoors guests can soak in one of the hot tubs or take a dip in the infinity pool and watch the icebergs go by.

Of course, no matter what type of cruise you’re on, a key part of the experience is the food. Thankfully the top deck had a great walking track as it was needed to walk off all those delicious meals. On board Roald Amundsen Aune is the ship’s main dining room and offers a buffet breakfast and lunch every day. Dinner alternated between a set four course menu or buffet so there was always plenty of variety. For an additional charge there is the upscale Lindstrom which combines Nordic and modern cuisine, or for a lighter meal guests can dine for lunch or dinner at Fredheim, a funky space offering a selection of street food style dishes such as dumplings, tacos and burgers for a small charge.

But really it’s all about the shore expeditions. Boarding the explorer boats to go and discover some new place is a thrill every time. Landing on remote parts of the world which are hardly visited by humans, taking a plunge in the polar waters off the shore, kayaking amongst icebergs or just cruising around the icebergs on the inflatables are experiences that will never be forgotten and are truly amazing.

Did we see polar bears? Yes we did. But what was unexpected was the wildness and raw beauty of Greenland and seeing a narwhal. 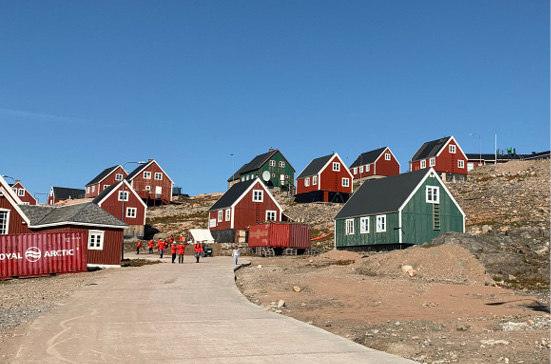