The travel industry has been on the front line of the coronavirus crisis. While the Federal Government has announced that its stimulus packages will apply to any businesses experiencing a downturn of 30% or more, for anyone in the travel and tourism sector the figure has been much closer to 100% – or worse, with clients opting for refunds meaning suppliers and agents have in many cases gone backwards. But after the initial shock of the shutdowns, there are some faint glimmers of positivity emerging — if we can just survive the next few months. Bruce Piper reports.

In the lead-up to Prime Minister Scott Morrison’s COVID-19 closure of Australia’s borders, travelBulletin had an interesting conversation with CATO Chairman, Dennis Bunnik. It was also the day before American President Donald Trump announced that travellers from Europe would not be allowed to enter the USA, which at the time was when things really began to “get real”.

Bunnik was becoming concerned about the mounting impact of border closures in Europe which were beginning to impact the ability of Bunnik Tours to operate. And clearly at the time bookings were starting to slow, and like many suppliers the escalating situation in Northern Italy was hitting flight schedules so the Bunnik team were working overtime to reaccommodate passengers.

So uncertainty was swirling, but Bunnik was taking comfort from the fact that to some extent the company had been there before. It seems like ancient history now, but about a decade ago Bunnik Tours was known almost exclusively as an Egypt specialist, The company had a strong clientele, well established relationships with suppliers in Egypt and a well-developed product offering. Then in 2011 the Arab Spring hit and business was pretty much wiped out — at the same time as the company had to handle repatriation of passengers and manage its way out of a mess not of its own making.

Now ten years on, Bunnik reflected that although that had been a very hard period, the Egyptian revolution had forced the company to remake itself into what it is now — a globally diversified business which has grown significantly “While it was very painful at the time, ultimately the business came out a lot stronger,” he said. And in the current context, although there is so much uncertainty ahead, “what we do know is that we are able to manage a crisis,” he added — with the proviso that by comparison COVID-19 is a “hell of a lot more serious”.

Most of us don’t have the benefit of hindsight about an event having such a drastic impact on our business, but perhaps it is helpful to reflect on such examples of survival despite catastrophe. The COVID-19 shutdown of the economy has made the days drag very slowly, and the hyper-availability of news on social media along with traditional sources such as TV and radio has contributed to our collective anxiety about the future. But as time grinds on some indicators are beginning to point to a future that may not be as bleak as we all fear.

As the coronacrisis started to bite, News Corporation began proactively collating data about changes to traveller spending. The initiative reflects the key importance of travel advertising for the publishing behemoth, with the regular Escape supplement in the company’s Sunday newspapers in Brisbane, Sydney, Melbourne, Adelaide and Hobart believed to be a key revenue driver for the company.

Exclusively shared with travelBulletin and Travel Daily, the credit card-based information has provided a graphic illustration of how hard the travel industry has been hit. The most recent figures (see graph) show the massive downturn as COVID-19 began to impact the economy. 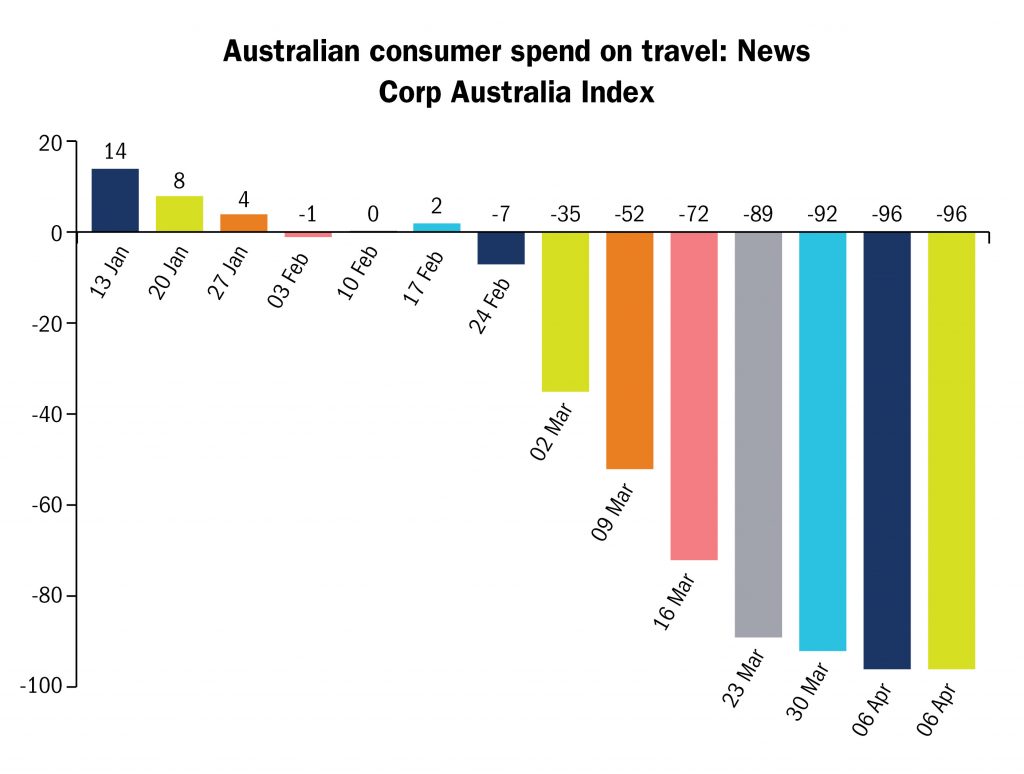 After relatively strong results in January, things started to slow a little bit the following month, which was when reports about coronavirus in China started to emerge. Then in March, as ever-tighter restrictions and border closures were imposed, the figures began to dive. The most recent results are for the week commencing 13 April, which was Easter Monday, and appear to indicate a glimmer of hope as — inversely to the results for the Australian spread of COVID-19 — the travel spending curve began to flatten out.

The travel spending tracker, based on credit card transactions, is the brainchild of News Corp Australia’s Industry Head for Travel, Omri Godjin, who initiated the index as part of work being done to assist the company’s clients better understand the total retail travel market. Although the figures indicated are an aggregation of spend with major brands across air, accommodation, cruising, travel agents, OTAs and tour operators, sub-category spending data is also available.

The latest results — which will hopefully be improved upon in upcoming weeks — are the first time that there hasn’t been an increasing decline, and may indicate the start of a recovery. Godjin also cited other indicators, including a marked change in searches on the Escape website away from coronavirus to more inspirational terms, as well as an uptick in consumer confidence which was heavily slammed in the initial weeks of the COVID-19 lockdowns.

There’s no doubt that the world will look markedly different once this crisis is over — but that doesn’t mean there won’t continue to be opportunities — and after the first shutdown shocks some organisations are already on the front foot.

So what will the post-COVID landscape look like? The temptation is for us to hibernate and wait for the storm to pass — but some in the industry are already starting to boldly position themselves to be top of mind for consumers when the travel bug starts to itch again. And there’s no doubt that it will, and when that happens anyone who has a strong relationship with their customers is going to be well positioned to capitalise on a surge in demand.

Bunnik Tours — perhaps benefiting from its previous Egypt near-death experience — is among the first out of the blocks, maintaining its presence in print and online despite being in just the same boat as the rest of the industry in terms of dealing with cancellations and refunds. The company has been on the front foot right since the earliest stages of the COVID-19 shutdowns, launching a “Still Dreaming” campaign which “celebrates connection, social interaction, meaningful experiences, exciting destinations and most of all inspiration for when the pause button is released”.

And while many in the industry have been putting out heartfelt messages about all being “in this together” while at the same time understandably slashing staff, public relations efforts and promotional activities, others like the Travel Industry Hub, C&M Recruitment and others have actually put rubber to the road, banding together to build and maintain travel connections through ongoing webinars — all requiring hours of work with zero remuneration.

In terms of mainstream travel media, it has been interesting to compare the proactive “pedal to the metal” attitude of News Corp with the much more conservative approach of its rival at Nine Publishing (formerly Fairfax) which has ceased publishing its popular Traveller supplement.

It’s to be hoped that the efforts of those who have been upbeat about the future will bear long-term fruit once the industry gets going again.

Another bold move last month amidst the shutdown was the launch by Express Travel Group of a new “corporate silo” within its agency network. The new Alatus Corporate brand provides a new option for travel management companies to navigate the brave new future, which for TMCs is further complicated by the impacts of NDC technology on their businesses which in the case of Qantas has seen income from GDS rebates slashed. The optimistic initiative means that despite COVID-19, Alatus Corporate will commence operations at the beginning of July, and will be part of the group’s 2020/21 financial year supplier contract negotiations.

The cruise industry, which has been demonised through the COVID-19 crisis, is also positioning itself for the recovery. And while it’s taken a major battering, the ability of cruise ships to relocate anywhere in the world provides the sector with a natural advantage, particularly if the first stage of international travel relaxations involve a “regional bubble”. Given the unrelenting negative coverage of cruising you can be certain that lines are already doing their very best to ensure that a cruise holiday is the absolute safest place to be for prospective voyagers.

There are many other examples of travel people being proactive in preparing for a post-COVID bounce. 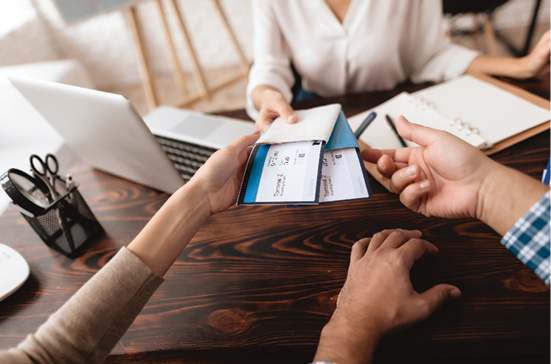 And if we can grit our teeth and get through this, there’s also going to be a key role for travel agents in sparking the recovery. It is expected to take some time before the general public is completely confident in a return to travel, but as the industry knows, travellers love travelling and travel agents are the ones who have the relationships with these high-spending travel aficionados — many of whom just can’t wait and who will be influenced and motivated to book future trips once their trusted travel consultant advisor gives them the go-ahead.

Be ready for the bounce

Just as this issue of travelBulletin goes to print, Governments across the country are starting to ease restrictions. Life in some Pacific Island destinations has returned to a semblance of normality after they were declared COVID-19 free, and New Zealand Prime Minister Jacinda Ardern has been proudly touting the country’s success in the coronavirus fight.

Marketing guru Mark Ritson has predicted that when restrictions are lifted there will be a three week period of collective community celebration, before spending settles into the new normal which is likely to reflect the unfortunate economic situation forced upon us by COVID-19. Those three weeks — which may be just around the corner — will be key for the industry to maximise its share of what News Corp’s Omri Godjin has described as an “exuberant, post-lockdown spending spree”.